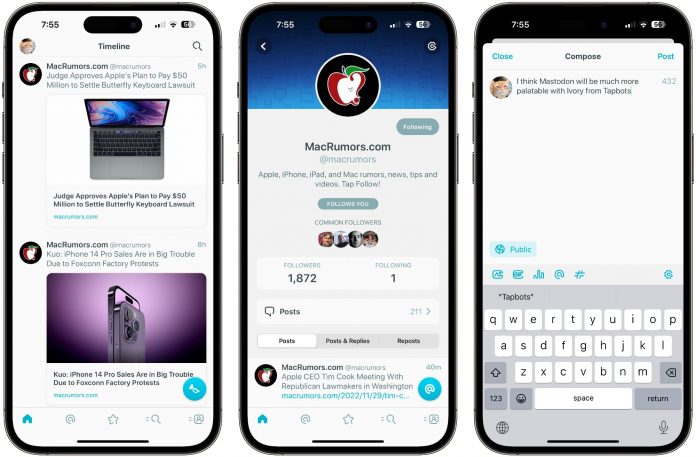 Tapbots, the company behind now-defunct Twitter client Tweetbot, today launched Ivory, an app that is designed to be used with the Mastodon social network.

Available for the iPhone and the iPad, Ivory has been in testing with a limited number of beta testers since late November, but with Twitter officially ending API access for third-party Twitter apps, Tapbots accelerated development and opted to launch an early version of Ivory.

Ivory has a Tweetbot-like layout that will be immediately familiar to Tweetbot users, offering the same general interface with tabs for a home timeline view, mentions, notifications, profile, lists, and more. There’s support for multiple accounts, content warnings, muting, and polls, along with bookmarks, trending posts, post statistics, gif access, and options to view local and federated timelines.

Ivory includes different theme and app icons like Tweetbot, and now that it is the sole social network that Tapbots is focusing on, improvements will be able to be implemented at a rapid pace. As of right now, the app is not as full featured as Tweetbot was, but there is a development roadmap available on the Tapbots website.

Profile editing, post editing, improved hashtags, improved notifications, and an improved navigation bar are all on the horizon.

Ivory is free to download, but all features can be unlocked for a $1.99 per month/$14.99 per year subscription fee. [Direct Link]

For those who have transitioned to Mastodon from Twitter, MacRumors has a Mastodon account where all of our stories are shared. Tags: Tapbots, Mastodon
This article, “Tweetbot Developer Tapbots Launches ‘Ivory’ App for Mastodon” first appeared on MacRumors.com