HomeNewsThe quirkiest and most unusual mobile tech at CES 2023
News

The quirkiest and most unusual mobile tech at CES 2023 CES 2023 isn’t the place to see brand new smartphones, as only a few have been announced at the show, but don’t think that means it’s entirely bereft of mobile-related products.

In addition to many wearables, the show is home to a variety of unusual, quirky, and often potentially life-changing mobile devices that aren’t phones. We’ve gathered together the best here. 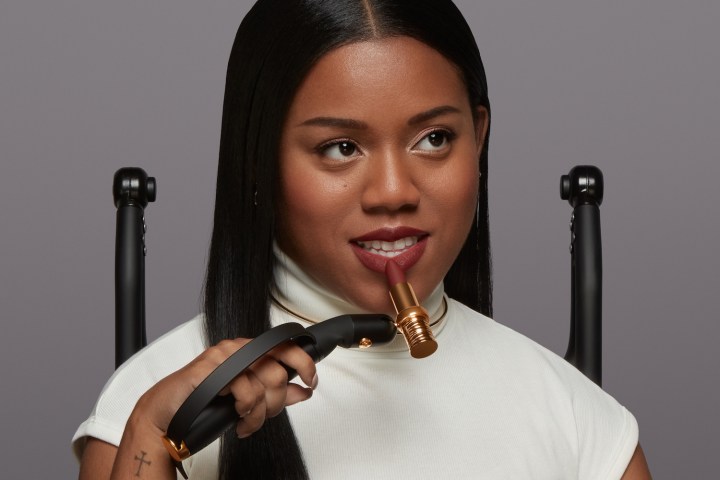 L’Oréal’s Hapta perfectly encapsulates what we like to see at CES. It’s cool tech used in an innovative, potentially life-changing way. It’s described as a “handheld computerized smart makeup applicator,” and it’s designed to help those with limited hand and arm movement to better apply makeup. It combines smart motion controls and an ergonomic design to make it easy to apply lipstick steadily at home.

The Hapta has a magnetic attachment with 360 degrees of rotation and 180 degrees of flexion, while the head can be locked into position during use. Details on exactly how it works are slim, but it sounds a little like a handheld gimbal. The internal battery lasts for about an hour of continuous use. The heads are interchangeable, too, ready to be used for other makeup applications beyond lipstick.

L’Oréal says it will release the Hapta in 2023 with the lipstick applicator through the Lancôme brand, and it joins the L’Oréal Brow Magic as the company’s interesting announcements at CES 2023.

The Loovic is a navigational device you wear around your neck, and it stops you from having to look down at a phone screen when using a map or navigation app. It’s specifically designed to help people with spatial recognition challenges, and for those who find it hard to learn directions. It uses a series of haptic and audio prompts to guide the wearer, with the software choosing landmarks and identifying features that are easier for people with impairments to follow.

The video above shows how Loovic is designed to work, and a prototype of the device itself. According to the company’s website, Loovic is still in the early stages of development, so it’s not available for purchase yet. Digging into the details, it appears Loovic is also being considered for in-car use and as a way to guide those who speak different languages in the event of natural disasters requiring evacuation.

Like Loovic, the Ashirase is a wearable navigational device, but this time it’s attached to a shoe and uses haptic feedback for guidance, along with voice assistance through an app on your phone. The small device weighs 65 grams, has an IPX5 water resistance rating, and comes in three different colors. The internal battery lasts for up to 12 hours before it needs recharging.

The Ashirase’s design can easily be swapped to different shoes and is less intrusive than the Loovic’s neckband design, although the two cater to different people. The accompanying app has various accessibility features to make it easier to use. The device isn’t available to buy yet, but the website indicates it’ll be released soon.

This is the Nowatch, pronounced Now-watch, not no-watch, and it’s a smartwatch that’s all about staying in the moment. There’s no screen on the Nowatch, and it measures stress, mood, and sleep, rather than pushing notifications or even telling the time, avoiding the things that take you away from what makes you happy, and keeps you relaxed. It does this through its use of sensors, including a heart rate monitor, and special haptics prod you to bring you back to reality.

It looks very special indeed with its choice of gemstone face — options include rose quartz, white agate, Tigers Eye, and amethyst — and a choice of stainless steel, gold, or silver cases. The battery life is short at just four days, though, and it’s expensive at $499 upwards, plus there’s a subscription package that goes along with it too.

LG Breeze are brainwave-monitoring sleep earbuds. An EEG sensor checks brain activity in real time, meaning the earbuds act as a sleep-tracking device, but that’s only the start. It also monitors activity during the day through an accompanying app and will play special EEG-synchronized sounds to ensure you not only get the best sleep, but also the most restorative sleep based on your activities.

The EEG-synchronized sounds aren’t the only options. There are 80 built-in tracks, including ASMR sounds, and it can also be connected to YouTube. Interestingly, the case used to store the earbuds has a “UVnano” function, where ultraviolet light keeps them clean and free from bacteria.

It’s not clear if the LG Breeze, which is also known as the LG Brid.zzz, will be released internationally. The press release indicates they will be released in South Korea during the first half of 2023. Sleep earbuds aren’t anything new, with the Bose SleepBuds 2 and QuietOn 3 being notable examples, but ‘buds that monitor your brain while you sleep are far less common, and pure quirky CES material.

At first glance, this is a smart home product, but to use it properly you need an Apple Watch. The Pepaminto Mattress Topper uses the Watch’s sensors and heart rate tracking to adjust the temperature of the bed while you’re sleeping, and can even make subtle changes across different body zones. It even takes air quality in the bedroom into account when keeping you comfortable. Changes to the temperature can also be made manually using the Digital Crown on the Apple Watch.

The foam topper has thin warming strips inside, and cooling bands made of graphite, so it doesn’t just warm you up, it’ll cool you down as well. The Pepaminto is being introduced at CES 2023, then will receive a test launch in the U.K. and Switzerland, with more markets to follow during the year.

Facebook
Twitter
Pinterest
WhatsApp
Previous articleCES 2023: TCL’s Nxtpaper 12 Pro could be a sweet iPad/Kindle hybrid tablet
Next articleThis powerful Lenovo laptop is over $2,000 off — no kidding!