HomeNewsShredder’s Revenge plays even better on mobile via Netflix
News

Shredder’s Revenge plays even better on mobile via Netflix 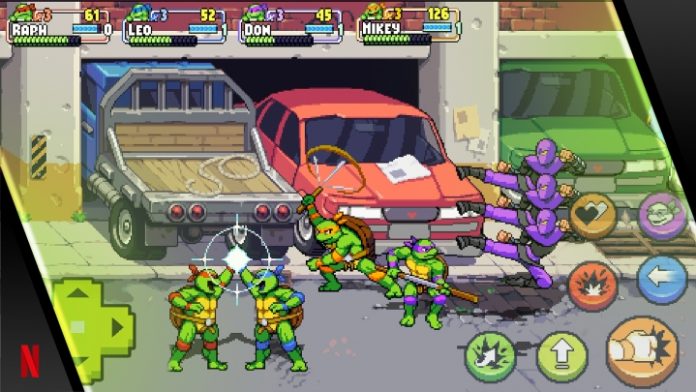 Netflix’s gaming library expands today with another hit, last year’s excellent Teenage Mutant Ninja Turtles: Shredder’s Revenge. If you have a Netflix subscription, you can download the retro beat ’em up (which we awarded a rare five-star review) for no additional cost right now on iOS and Android.

What’s more exciting, though, is that the mobile port might be the best version of Shredder’s Revenge out there.

That came as a bit of a surprise to me. Before going hands-on with it, I was skeptical about how a fast-paced, combo-driven action game could function with touch controls. I didn’t quite understand how four-directional movement could feel smooth, nor comprehend how its various buttons could work in a touch interface.

Within moments of picking it up, all of those questions would be easily answered. In classic mobile fashion, my left thumb controls movement with an on-screen D-pad that feels more natural than anticipated. Though it’s the controls on the right side I’m most impressed by. There are six buttons total that control the action, each of which is clearly marked with graphic icons. A fist denotes basic attack, an up arrow indicates jump, and another arrow pointing to the side controls my dodge. Dedicated buttons for uppercut, taunt, and special attack round out the set in a clean layout that’s easy to jump between.

Console game controls translated to mobile can often be hit-or-miss. I remember being turned off by Apex Legends Mobile last year, which felt far too complicated and cluttered. By comparison, Shredder’s Revenge feels even easier to play on a phone than with a controller. I often found myself mixing up which buttons did what when playing on PC, but the icons helped me tackle battles with much more confidence and actually aim to execute combos I’d usually luck into.

The only drawback is that the on-screen button UI does have a tendency to obscure the action. If I fought my way into the bottom corner of a screen, it would often mean I was eclipsed by the D-pad. Quirks like that still make a gamepad or controller attachment like the Razer Kishi 2 a safe bet, but the touch scheme makes for a smooth pick-up-and-play game that I could comfortably enjoy on the couch.

Other aspects of the retro brawler benefit from a smaller screen. Its overworld map is more satisfying to navigate thanks to touch controls. The vibrant pixel art looks even better on an iPhone than it does on a massive monitor, and the performance has been buttery smooth so far. Perhaps most importantly, its quick levels are a more natural fit for the pick-up-and-play mentality of mobile. I appreciate that I can kick out an entire chapter in less than 10 minutes and go about my day. That’s traditionally the opposite of how beat ’em ups usually play, as their arcade format encourage players to blaze through their short campaigns in one sitting. That’s how I played Shredder’s Revenge my first time through, and I’m certainly having more fun with it as a casual game.

TMNT: Shredder’s Revenge has me eager to play more old-school brawlers on my phone, especially ones as carefully ported as this. Rather than trying to squeeze big console experiences onto a small screen, I hope Netflix turns my iPhone into a pocket-sized arcade.

Facebook
Twitter
Pinterest
WhatsApp
Previous articleHow to get Windows 11 for free
Next articleApple to Make Custom Displays In-House, Starting With MicroLED for Apple Watch Ultra in 2024