HomeNewsSamsung’s new Odyssey Neo G9 gaming monitor is beautiful, but it has...
News

Samsung’s new Odyssey Neo G9 gaming monitor is beautiful, but it has a fatal flaw At CES 2023, I had a chance to look at Samsung’s upcoming Odyssey Neo G9. It’s a monster gaming monitor, and you don’t need to look further than the spec sheet to see that. Dual 4K resolution, a 240Hz refresh rate, and a 32:9 aspect ratio with a 57-inch screen? There’s a lot to love.

And after seeing it, I was floored by the quality. It’s an insane gaming monitor that looks fantastic, and I can’t wait to use one for an extended period of time. But there’s a big problem with the new Odyssey Neo G9, and it could be dead on arrival. 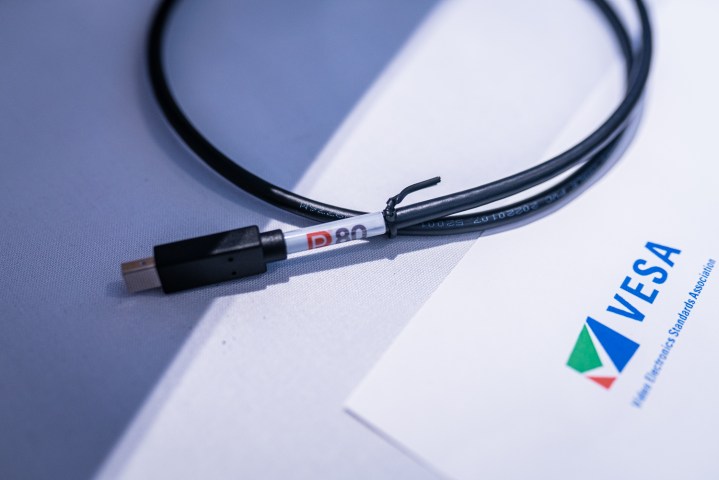 DisplayPort 2.1. We’ve been talking about it for over a year, and even more so after AMD announced its RX 7900 XTX and RX 7900 XT graphics cards would support the standard. The new Odyssey Neo G9 is the first monitor we’ve seen that supports DisplayPort 2.1, and that’s a surprising problem.

Advertising shenanigans aside, the new Odyssey Neo G9 needs DisplayPort 2.1. It runs at a 240Hz refresh rate, and when paired with the resolution, it needs a bandwidth of 36.19Gbps with HDR off and 45Gbps with HDR on. That’s with full compression, too. The actual data rate is much higher.

The previous standard, DisplayPort 1.4a, only supports up to 25.92Gbps, so you need DisplayPort 2.1 to drive the Odyssey Neo G9 (2023) at its full resolution and refresh rate. The problem is that only AMD and Intel actually support DisplayPort 2.1 right now.

Intel isn’t even a factor in this conversation, either. For as impressive as the Arc A770 and A750 are, they’re targeting 1080p gaming. They’re not powerful enough to drive 4K, let alone dual 4K.

And for the full refresh rate, the RTX 4090 supports Nvidia’s Deep Learning Super Sampling 3 (DLSS). With DLSS 3’s unique frame generation capabilities, it can easily push into the 200 fps territory, even with a resolution as high as the new Odyssey Neo G9 demands. Frankly, the RTX 4090 is the only GPU that makes sense with Samsung’s latest display.

We’ll never get to see it in its full glory, though. Locked to DisplayPort 1.4a, the RTX 4090 can’t drive the Odyssey Neo G9 at its full resolution and refresh rate, despite the fact that it’s the only GPU theoretically powerful enough to. It’s a mismatch, where the highest-end monitor you can buy in 2023 doesn’t have a GPU even capable of fully showing it off.

I don’t want to discredit how great the monitor looks, though. VESA, who created the DisplayHDR standard, allowed me to play a bit of the upcoming Lies of P game with an RX 7900 XTX and the Odyssey Neo G9 (2023), and it looked fantastic. The game looked like it was running above 60 fps at native resolution, and it looked impossibly sharp for such a large screen.

Make no mistake, the Odyssey Neo G9 is still an end-game gaming monitor. It’s just such a shame that the RTX 4090 can’t fully drive it.

Although I’ve focused on the Odyssey Neo G9 here, it’s important to point out that the problem with DisplayPort 2.1 and its limited GPU isn’t on Samsung’s shoulders. If anything, I commend Samsung for driving this new connection standard forward. The problem here is Nvidia’s poor foresight concerning its RTX 40-series GPUs.

I’m looking forward to the new Odyssey Neo G9, and I’ll be happy to drive the display with an RX 7900 XTX once the monitor has been released. However, Samsung’s new Odyssey OLED G9 looks like the winner in 2023, not because it’s inherently better than the Neo G9, but because the best graphics cards can actually drive the display at its full potential.

Facebook
Twitter
Pinterest
WhatsApp
Previous articleVisible deal alert: How to save 50% on your wireless service for a full year
Next articleThis Lenovo laptop is usually $999, but today it’s only $269