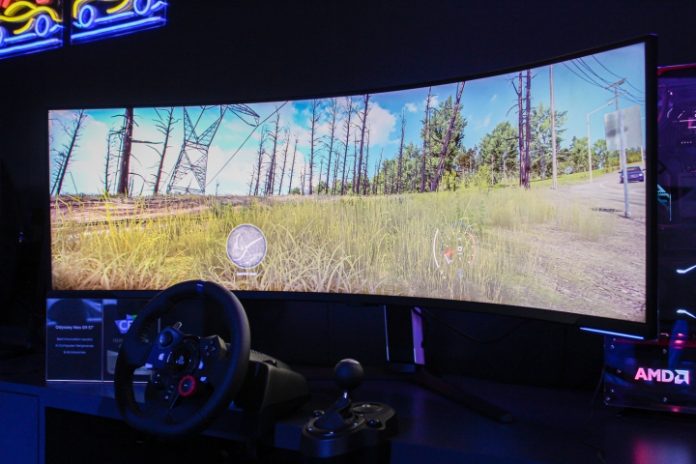 Coming out of the year’s biggest tech event, two massive monitors stood out: Samsung’s Odyssey OLED G9 and Odyssey Neo G9 2023. They’re both huge 32:9 monitors, and it’s going to be hard to choose between them if you want the best gaming monitor.

Neither monitor has been released yet, but we can still compare a lot of aspects of them. We’ve briefly seen them, but we’re relying on disparate specs and about a half-hour of screen time. We’ll need to see how the two monitors hold up once they’re actually here before drawing firm conclusions.

The only factor working against that assumption is the Odyssey Neo G9. As one of the first DisplayPort 2.1 monitors, and the only dual 4K monitor on the market, Samsung could charge a hefty premium. It’s hard to say for sure right now, though.

Both the Odyssey OLED G9 and Odyssey Neo G9 are massive 32:9 monitors. If you’re unfamiliar, 32:9 essentially places two standard 16:9 screens side-by-side, just without the bezel. That makes them very wide, but they’re not the same size. The OLED G9 is 49 inches diagonally, while the Neo G9 is 57 inches diagonally.

The Neo G9 easily wins on the resolution front, but size plays a significant role here. The OLED 49 uses a much thinner panel and comes with a 1800R curve. That makes the Neo G9 much thicker, especially when paired with its 57-inch size and aggressive 1000R curve.

We’ve only spent a little bit of time with each of these monitors, but the higher resolution makes an immediate difference on the Neo G9. On the opposite end, the OLED G9 feels much more manageable due to its smaller size and thinner panel, so keep it in mind if desk space is a concern.

The biggest difference between the Odyssey OLED G9 and Odyssey Neo G9 is the panel each monitor uses. The OLED G9, as the name implies, uses an OLED panel. This allows each pixel to individually dim itself, providing the best HDR you can get on a PC monitor right now. Like the Alienware 34 QD-OLED, it also employs quantum dots to improve brightness and color saturation.

We don’t know what type of panel the Odyssey Neo G9 2023 uses, but Samsung has confirmed that it uses a mini-LED backlight. Mini-LED is a big deal, as we saw with monitors like the Cooler Master GP27Q. The missing puzzle piece is the number of local dimming zones.

Local dimming is critical for solid HDR performance, and more zones are better. Mini-LED enables a far greater number of zones, but Samsung hasn’t confirmed the exact count yet. What we know so far is that the Odyssey Neo G9 is certified for VESA’s DisplayHDR 1000, and that last year’s model came packed with 2,048 zones. We expect just as many and likely more zones on the 2023 model.

Trying the monitors out briefly, the color and HDR performance of the OLED G9 is immediately better. OLED manages HDR performance that panel types like VA and IPS just can’t manage, and they deliver very low response times for gaming (Samsung claims 0.1 milliseconds).

However, the higher resolution of the Odyssey Neo G9 goes a long way in making games sharper and more immersive. It also gets far brighter, which is great if you’re playing in a bright room. We know it reaches at least 1,000 nits of peak brightness, but it might be able to climb higher. Samsung hasn’t confirmed that yet.

Although the extra resolution on the Odyssey Neo G9 helps, it’s not free. It’s one of the first DisplayPort 2.1 monitors on the market, and you’ll need that standard if you want to drive the full resolution and refresh. Currently, only AMD’s latest graphics cards like the RX 7900 XTX support DisplayPort 2.1, leaving Nvidia users out in the cold (even with a powerful GPU like the RTX 4090).

For refresh rate and response time, the Odyssey OLED G9 and Odyssey Neo G9 are evenly matched based on Samsung’s specs. The company claims a response time of 0.1ms for the OLED G9, as well as a refresh rate of 240Hz on both screens. On specs alone, you can’t go wrong with either.

There’s a little more to the story than specs, though. The Odyssey OLED G9 uses an OLED panel, and OLED inherently has very low response times. A response time of 0.1ms isn’t out of the question. On the Odyssey Neo G9, the response time will likely be higher.

We don’t know what panel type the Odyssey Neo G9 2023 uses yet, nor the official response time, but it probably uses a VA panel. That’s what we see most typically paired with a mini-LED backlight, and last year’s model used a VA panel. In order to achieve low response times, Samsung will need to include a lot of overdrive.

Monitor overdrive lowers response time, but it can show artifacts like ghosting and coronas. Samsung’s overdrive typically isn’t bad, as we’ve seen with monitors like the Samsung Odyssey Neo G8, but artifacts are still present.

We don’t know a lot about the features of these monitors yet. They’ll both likely support Nvidia G-Sync and/or AMD FreeSync, but Samsung hasn’t confirmed support yet. What we know is that the Odyssey OLED 49 comes with Samsung’s Smart Hub and Gaming Hub.

These features allow you to use streaming apps like Netflix and YouTube, as well as cloud gaming apps like Xbox Game Pass and Nvidia GeForce Now, without a computer. They’re built into the monitor, just like a TV. And they work great, at least based on our time with them with Samsung’s M8 Smart Monitor.

It’s not clear if the Odyssey Neo G9 will support these apps, as well. Samsung hasn’t said one way or the other, so for now, we’re assuming Samsung will stick with the plan that it did last year and omit the features. That’s a notch for the Odyssey OLED G9.

It’s best to wait until we have both of Samsung’s new 32:9 displays before drawing any firm conclusions. Based on our first look at these screens, though, the Odyssey OLED G9 looks mighty impressive. It has better image quality, more features, and it will likely cost less than the Odyssey Neo G9.

However, it’s more of an evolution of last year’s display. For the cutting edge, it’s impossible to touch the Odyssey Neo G9. The screen still looks excellent, and the extra resolution goes a long way. That said, you need one of AMD’s latest GPUs to drive the display, which means the Odyssey OLED G9 wins by default for many buyers.