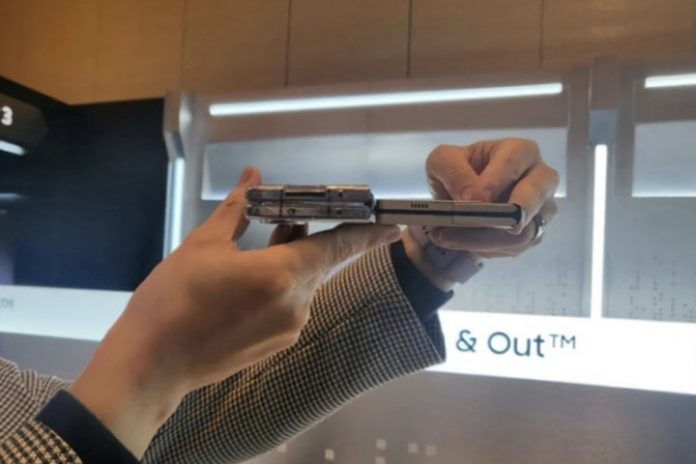 Samsung has ambitious plans for its next foldable phone, and if reports coming out of Korea are to be believed, the upgrades are quite significant. A Korean blog has shared an image of a prototype with a hinge design that Samsung reportedly showcased at CES 2023.

A side-by-side comparison of this prototype (via Naver) rocking a reimagined hinge design and a Samsung Galaxy Z Fold 4 device highlights two major differences. First, there is no wedge-like gap between the two halves of the phone.

Second, thanks to the no-gap design, the prototype foldable phone looks considerably slimmer. Earlier this month, Naver also reported about a new droplet mechanism for the foldable panel that would essentially get rid of the crease on Samsung’s upcoming device.

Now, this is predominantly good news, with a noteof caution. Let’s start with the hinge design. Samsung is reportedly going with a moving gap design for the hinge that will accommodate the “screen droplet” when the device is folded.

Thanks to the droplet design, the radius of curvature is higher, which means less strain on the foldable material and greater longevity. The major advantage, as per multiple leaks, is the near disappearance of the crease along the middle.

Yes, you get used to the crease as you spend some time with the Galaxy Z Fold 4, but it’s very much there. I haven’t come across a single person that briefly played with my Galaxy Z Fold 4 and didn’t mention the crease problem.

Chinese smartphone makers have done a better job at handling the crease conundrum. Take, for example, the Oppo Find N and its successor, which barely show any semblance of a crease on the inner foldable screen. It looks stunning, in person.

With the crease gone, Samsung will be solving one of the biggest annoyances of its foldable phones. Thankfully, the refined hinge design also means Samsung is also getting rid of the V-shaped gap between the two halves of the Galaxy Z Fold 4.

At least the prototype device pictured at CES appears to show a gapless design. It’s surprising given Samsung’s rule as a pioneer in the foldable phone trend that it’s actually rivals like Oppo, Xiaomi, and Honor who already offer foldable devices with a gapless design.

The gap, aside from being an eyesore, is also a mechanical hazard. I’ve often found small particles resting on the screen every time I open my Galaxy Z Fold 4. With a no-gap design, Samsung will also ensure more reliable ingress protection against dust and water. And on top of that, it just looks stunning.

It would also finally free smartphone users of those inconvenient two-part protective cases for the Galaxy Z Fold 4, which are necessary because the angled halves don’t easily allow putting on a case in one piece.

All that innovation comes at a cost

A gapless design also means the Galaxy Z Fold 5 should feel a lot slimmer and more pocketable, even if the actual thickness of the slate hasn’t changed much. I love the Galaxy Z Fold 4, but every time I pick it up, the thickness really gives some exercise to my palms.

But thinness comes at a cost. Assuming Samsung has achieved the holy grail of a crease-free, gapless foldable phone that is also drastically slimmer and sleeker, there would be a few practical compromises.

With space shrinking inside the chassis, the battery capacity will most likely take a hit. Plus, when innards are too tightly crammed in, repairability takes a toss, and even minor repair or replacement is going to cost a fortune.

Another worrisome trend that I’ve repeatedly experienced on thin and small phones is poor thermal hardware. It’s not just gaming, but even video capture that gets these phones hot really quickly, leading to frame drops or app stutters.

Look no further than the Pixel 7 and Samsung Galaxy S22 for the heating problem because of their subpar thermal hardware. Here’s hoping that Samsung doesn’t compromise on these practical concerns when it eventually puts a thinner, gapless Galaxy Z Fold 5 on the shelves later this year.