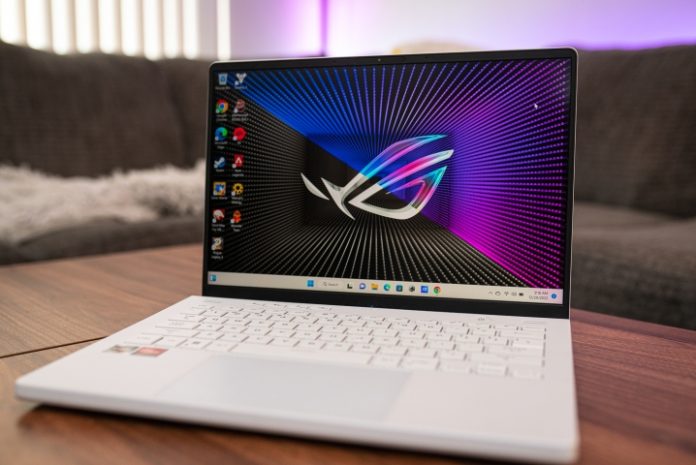 Asus announced updates to two of its most portable gaming laptops at CES 2023. The 13.4-inch ROG Flow X13 has been slimmed down and powered up, making it an even more viable portable gaming option. Meanwhile, the 14.o-inch ROG Zephyrus G14 has received its own updates and is an incredibly powerful machine given its smaller chassis.

Both are solid offerings for anyone who wants a powerful gaming laptop they can easily carry around. The Flow X13 is slower by itself, but much faster with its XG Mobile add-on, while the Zephyrus G14 looks more like a gaming laptop and carries more power around with it. Which is the right portable gaming solution for you?

The ROG Flow X13 is all about packing as much gaming power into as small a package as possible, and it’s slightly thicker this time around. Still, it overall has a smaller footprint than the ROG Zephyrus G14. The biggest difference is in weight, with the Flow X13 being a whole pound lighter than the Zephyrus G14.

Aesthetically, the Flow X13 has a simpler, less gamer-centric design with an all-black chassis. Its biggest design flair is a series of diagonal lines across the lid that give it some texture for a better grip. The venting along the sides and bottom of the chassis are aggressive, but otherwise, this could be any premium 13-inch laptop.

The Zephyrus G14 has a slightly more gamer-focused design, with more angles and two colors, silver and black. The optional AniMe Matrix display can add animations and other flair that the Flow X13 lacks. If you want a machine that looks more like a gaming laptop, then the Zephyrus G14 is the right choice.

We’re not sure of either laptop’s construction or build quality, but they’ll likely match previous versions of both laptops, which were both robust.

The keyboards on each laptop appear to offer plenty of spacing and nicely sized keycaps, with gamer-oriented fonts. If they’re equal to previous versions, then they’re good keyboards that are fine for mashing during intense gaming sessions. Both the Zephyrus G14 and Flow X13 offer just single-zone RGB lighting in the keyboard. The touchpads are normal mechanical versions and, again, are likely to work well. The Zephyrus G14 has a larger version thanks to more room on the palm rest.

Connectivity is about equal, with each device offering a mix of USB-C and USB-A ports along with HDMI 2.1. Due to the AMD chipset, there’s no Thunderbolt 4 support. Both have up-to-date wireless connectivity and 1080p webcams with IR cameras for Windows 11 Hello passwordless login.

The Flow X13 has an additional plus, though. It offers the ROG XG Mobile Interface that can connect with the XG Mobile docking solution that incorporates up to an RTX 4090. So as long as you’re willing to game in one spot, you can dramatically increase the Flow X13’s gaming performance.

Both laptops are based around the new AMD Ryzen 9 7940HS, an 8-core/16-thread CPU running at 35 watts to 54 watts (configurable) and with a maximum boost clock of up to 5.2Hz. It all depends on how Asus tunes each machine, but in terms of pure CPU performance, they’re likely to be quite similar. The Zephyrus G14 will have a larger chassis and a theoretically better thermal design and more airflow, so it could pull ahead. Both will be excellent productivity performers and will likely do well with CPU-intensive creative apps.

The Flow X13 maxes out at the Nvidia GeForce RTX 4070, which is amazing for a small laptop, but the Zephyrus G14 takes advantage of its larger chassis and can be configured all the way up to an RTX 4090. It therefore at least has the potential to be significantly more powerful. The extra GPU horsepower will also make it faster for creative apps that utilize the GPU. In general, the Zephyrus G14 has considerably more configurations offered, while the Flow X13 is more limited.

However, remember that the Flow X13 supports the Asus XG Mobile docking solution that can incorporate the RTX 4090 as well, and so with an expensive upgrade, you can get closer to the same performance in a much less portable package.

But the Zephyrus G14 also offers a spectacular QHD+ mini-LED option at 165Hz that’s incredibly bright, will offer excellent colors, and provide deep contrast. It’ll be the superior option by far, and will also enhance HDR for both games and media.

Portability versus performance? That’s the question

If you’re looking for the most portable gaming machine, then the Flow X13 has the advantage. The touchscreen is a nice addition, as is the 360-degree hinge. But the trade-off for performance might be better balanced by the Zephyrus G14, which has been a popular option in the past. The additions of up to an RTX 4090 and a mini-LED display take things up another notch.

The Flow X13 does have its secret weapon, the XG Mobile docking solution that ups the power, but that takes away from its portability and adds considerable cost. And the Zephyrus G14 has the more gamer-oriented aesthetic. We’ll have to wait until we’ve reviewed the updated models and receive some more detailed pricing information, but for now, the ROG Zephyrus G14 looks like it’ll continue to have a wider appeal.