Nvidia’s CES 2023 presentation has wrapped, and we finally have all of the announcements from Team Green. Nvidia is bringing new GPUs to desktop and mobile, a slate of new games is receiving DLSS 3, and GeForce Now is finally getting an upgrade to Nvidia’s RTX 40-series GPUs.

To catch you up, here’s everything Nvidia announced at CES 2023. 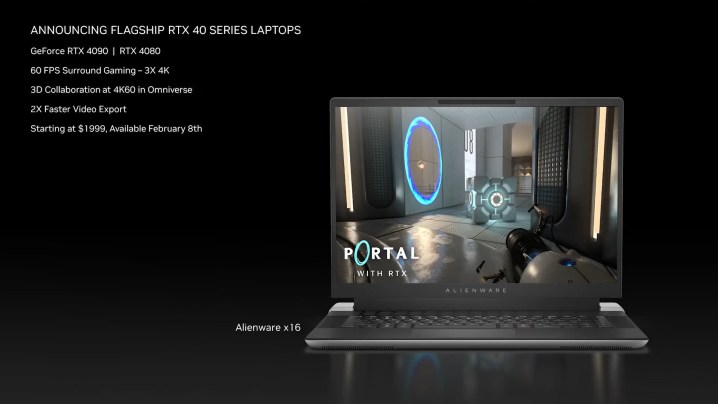 It was inevitable that Nvidia would release mobile graphics cards at some point, but we didn’t expect a GPU as monstrous as the RTX 4090 to show up in laptops. Nvidia is bringing its whole range to mobile, including the RTX 4090, and the first machines will start arriving as soon as February.

We’ll undoubtedly see specific models carrying these cards throughout CES. During the presentation, Nvidia showed off the Alienware x16 with the RTX 4090, but we expect dozens of machines throughout the show.

In a surprise to no one, Nvidia reintroduced its ill-fated 12GB RTX 4080 as the RTX 4070 Ti. The name and price are the only things different this time around, with Nvidia knocking it down from $900 to a more reasonable $800. The specs remain the same, including 12GB of GDDR6X memory — despite the fact that Nvidia never mentioned that this product had already been announced.

For performance, the card looks like it will match last-gen’s RTX 3090 Ti, which is no small feat for an $800 GPU. It also supports Nvidia’s RTX 40-series features like Shader Execution Reordering and DLSS 3. We won’t have to wait long to see how it performs against current-gen options, as the GPU is releasing on January 5.

Nvidia moved onto its GeForce Now platform, announcing that it would soon replace its RTX 3080 plan with a new GeForce Now Ultimate plan. This new subscription uses the RTX 4080 instead, enabling 4K gaming at 240Hz and Nvidia’s DLSS 3 in the cloud.

The plan will start rolling out in late January depending on your region, and Nvidia expects to have it fully rolled out before the end of March. Existing RTX 3080 subscribers get an upgrade for free at the same $19.99 per month. Nvidia didn’t clarify if new subscribers will have to pay more, though.

Nvidia is bringing a slew of updates to its RTX features on desktop outside of gaming. For starters, the RTX Remix modding platform is entering early access “soon.” This is the tool that enabled Portal RTX, so we could see a flood of next-gen classics in the coming months.

In addition, Nvidia is adding a new feature to its Nvidia Broadcast tool. Using AI, Broadcast can readjust your eyeline to focus on the camera. It’s a bit uncanny in the side-by-side you can see above, but it’s an impressive tool if it works as well as Nvidia’s image suggests.

Finally, RTX Video Super Resolution is coming to Google Chrome and Microsoft Edge in February. This takes the AI upscaling principle of DLSS and applies it to videos in your browser, automatically enhancing low-resolution content. It’s only supported on Nvidia RTX 30-series and 40-series GPUs, though.

Nvidia started off its presentation with a slew of new games receiving DLSS 3 in the upcoming months. The Day Before, Witchfire, Throne and Liberty, Atomic Heart, and Warhaven are all slated to receive support for the upscaling tech, and some will come with ray tracing, as well.

We’ve known about several of these games for a while, but Nvidia showed off exclusive gameplay demo reels for all of them, including the hotly-anticipated Witchfire.

Everything else Nvidia announced at CES 2023

Nvidia also made some smaller announcements related to robotics and self-driving vehicles, which you can find below.