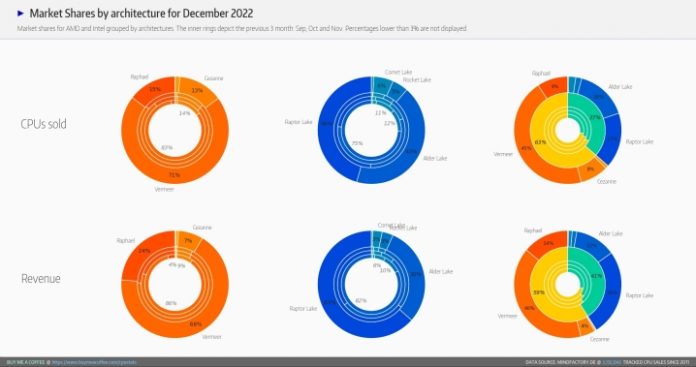 AMD’s Zen 4 processors could be in deep trouble, according to recent sales data. In fact, it looks like Zen 4 chips could be five times less popular than the previous-generation Zen 3. Why is no one buying Zen 4?

The data comes from German retailer Mindfactory (via Reddit), which provides daily sales data for a range of processors, both Intel and AMD. And the findings for December 2022 do not make pleasant reading for fans of Team Red.

Compare that to Zen 4 sales, which made up a mere 15%, and the difference is stark: Mindfactory sold 5.6 times as many Zen 3 chips as Zen 4.

Of course, this is just data from one retailer, and the picture might be different elsewhere. But that will probably not be much comfort to AMD, given the company’s Zen 4 chips are seemingly selling so poorly just three months after launch.

Why is Zen 4 struggling?

In fact, it doesn’t appear that AMD’s rival Intel is suffering the same problem, at least not to the same extent. According to the Mindfactory data, 46% of Intel CPU sales in December 2022 were of the latest Raptor Lake chips, compared to 43% for the firm’s previous Alder Lake processors.

What could have caused Zen 3 to have such a huge lead over the latest-generation AMD processors? Well, Zen 4 was only launched in September 2022, while Zen 3 first saw the light of day in November 2020. That means Zen 4 hasn’t had long to eat into the sales of its predecessor.

Yet that doesn’t fully explain the problem AMD is apparently facing. Intel’s Raptor Lake, for example, was launched even later than Zen 4 — in October 2022 — and yet Intel seems to have had very little trouble convincing its customers to upgrade.

As we noted in our AMD Ryzen 7000 vs. Intel Raptor Lake explainer, AMD’s newest chips incur noticeably higher costs than Intel’s Raptor Lake thanks to their use of expensive DDR5 memory and a lack of affordable compatible motherboards. Those larger ecosystem costs might have pushed people away from pulling the trigger on Zen 4.

Both AMD and Intel are set to unveil updates to their chip ranges at CES 2023, with 65W Ryzen 7000 non-X chips from AMD and 65W 13th-generation Intel Core non-K processors set to be announced. AMD must be hoping its new chips will provide a much-needed boost to help revive Zen 4’s fortunes.