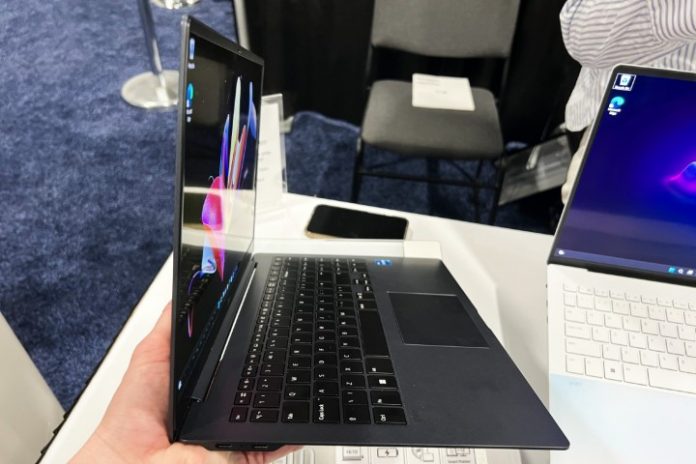 Apple’s MacBook Air M2 brought about a complete redesign of the iconic machine, as it lost he wedge and adopted the boxier, simpler design of the newer and larger MacBook Pros. It also slimmed down considerably to 0.44 inches, making it one of the thinnest laptops ever.

LG just announced a laptop at CES 2023 that’s even thinner, the Gram Ultraslim. Coming in at just 0.43 inches, it also weighs just 2.2 pounds while still sporting a much larger 15.6-inch display. Which is the better thin-and-light laptop?

We don’t know much about the Gram Ultraslim’s construction, although we’re guessing it’s magnesium alloy given its low weight and large display. In our experience, magnesium laptops tend to have some bending and flexing, especially when they have larger displays, but they’re still durable, thanks to magnesium’s overall strength. The MacBook Air M2 is an all-aluminum laptop but has some bending in its lid.

What’s truly remarkable, though, is that LG managed to make the Gram Ultraslim even thinner than the MacBook Air M2 with a 15.6-inch display versus a 13.6-inch panel for the MacBook. And at just 2.2 pounds, it’s a full half-pound lighter. The Ultraslim is wider and deeper than the MacBook, although it’s not as much deeper as I expected, given the larger display. In any case, it will not weigh you down as much as the denser MacBook Air M2. The comparison will be even more interesting later this year, when Apple is expected to launch a 15-inch version of its MacBook Air.

In terms of aesthetics, the MacBook enjoys Apple’s minimalist design that’s elegant without being overstated, and it comes in four colors: Midnight, Starlight, Space Gray, and silver. The Gram Ultraslim is a simple sliver of a laptop with extremely narrow edges and notches that house the USB-C ports and audio jack.

We don’t know anything about the Gram Ultraslim’s keyboard or touchpad, but we do know that the MacBook Air M2 enjoys the Apple Magic Keyboard and haptic touchpad. Both are among the best you’ll find on laptops today, and so LG has a pretty high standard to meet.

Connectivity is surprisingly similar, with both laptops limited to USB-C. You get two with Thunderbolt 4 on the MacBook, and the same number on the LG, plus a USB-C 4 port. Many 15-inch laptops have some legacy ports thrown in, but that’s not the case with the Gram Ultraslim.

Both laptops have 1080p webcams, which is becoming the new standard for premium laptops. LG includes some extra privacy utilities like LG Glance that will lock the laptop and put it to sleep when the user leaves the area and wake it back up and log in when the user returns.

The MacBook Air M2 uses Apple’s M2 ARM processor with an 8-Core CPU and either an 8- or 10-core GPU. It provides excellent productivity performance that competed strongly against Intel’s 12th-gen CPUs, along with potentially better creative application performance given optimizations built into the M2 CPU.

The Gram Ultraslim will use Intel’s 13th-gen P-series CPUs, meaning they’ll run at 28 watts and will feature up to 14 cores (six Performance and eight Efficient) and 20 threads. Intel predicts a 10% performance increase, so the MacBook Air M2 will likely maintain its competitiveness against Intel’s latest.

The MacBook Air M2 provides outstanding battery life that few Intel-based laptops have been able to match. With just 60 watt-hours of battery capacity, the Gram Ultraslim is unlikely to keep up. We’ll expect much more longevity out of the MacBook Air M2, but we’ll have to wait and see.

The Gram Ultraslim enjoys a 15.6-inch OLED display, which is sure to provide superior colors and contrast compared to the MacBook Air M2’s 16:10 2560 x 1664 IPS panel. However, LG’s screen is just Full HD (1,920 x 1,080), which means it won’t be terribly sharp, and oddly enough, it’s in the old-school 16:9 aspect ratio that’s not as good for productivity. That’s a disappointing choice, given that the industry has moved on to 16:10 and 3:2 aspect ratios.

So, the Gram Ultraslim has a larger OLED panel that’s lower-res and not as tall as the MacBook Air M2’s. If you absolutely need wide and accurate colors, as well as the deepest contrast, then that might be enough to give the Gram Ultraslim the edge, but most productivity users are going to appreciate the taller aspect ratio and sharper panel provided by the MacBook Air M2.

Different machines with a lot of unknowns

We’ll have to wait for more details and, even more important, our review of the LG device before we can say which laptop is ultimately the winner. But for now, the MacBook Air M2 comes out on top.

Facebook
Twitter
Pinterest
WhatsApp
Previous articleApple’s 2023 Roadmap: When to Expect New Product Launches This Year
Next articleWhat we can expect from Android satellite phones and why we should all want one