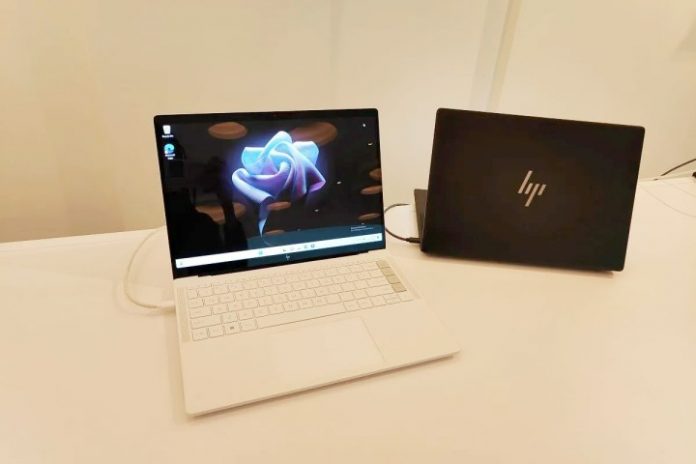 Apple’s MacBook Pro 14 has taken over as the best 14-inch laptop you can buy today, thanks to great performance and battery life, a spectacular display, and an elegant, functional design. It’s one of the best laptops you can buy, and it’s just been upgraded with the newer Apple M2 Pro and Max CPUs for even better performance and efficiency.

HP introduced the Dragonfly Pro at CES 2023 to take on the MacBook Pro, and it has a pretty steep hill to climb. We haven’t been able to review the laptop yet, but it marks an interesting switch for the Dragonfly to the consumer segment from the commercial market. Can HP’s newly designated 14-inch machine take on the best?

The Dragonfly Pro and MacBook Pro 14 are within fractions of an inch of each other in width and depth, and they both weigh about 3.5 pounds. The Dragonfly Pro is quite a bit thicker, though, something we find difficult to account for.

HP makes great keyboards, especially in their Spectre and Dragonfly lines, and we hope this carries over to the Dragonfly Pro. If it does, we’ll see a snappy, responsive keyboard that makes fast touch typing comfortable for hours. It still won’t live up to the Magic Keyboard on the MacBook Pro 14, though, which remains the best keyboard on a laptop today. It’s not as deep as some, but its switches are precise and consistent, and typing on it is a pleasant experience. Both laptops have haptic touchpads, although Apple’s is a bit larger. We’ll have to test how HP’s version compares to the MacBook Pro 14’s Force Touch, which is today’s standard for touchpads.

One interesting aspect of the Dragonfly Pro is HP’s new 24/7 live concierge support, which is accessible using one of the four hot keys on the right side of the keyboard. There will be a fee for the service, which will put you in touch with a live technical support agent when you run into a jam. Interestingly, if you don’t sign up for the service, then that key is nonfunctional and can’t be remapped.

The Dragonfly Pro uses an AMD Ryzen 7 7736U 15-watt to 28-watt 8-core/16-thread CPU, and the two companies worked together to utilize an adaptive platform management framework that aims to adopt performance to real-world productivity workflows. It’s a low-power version of AMD’s latest Ryzen 7000 series chips, likely to provide solid productivity and limited creativity performance. Contrast that with the minimum M2 Pro in the MacBook Pro 14, which starts with a 10-core CPU and 16-core GPU and improves the performance of the already class-leading M1 Pro.

Even though it’s a brand-new MacBook Pro 14 update as this comparison is being written, we’re still willing to guarantee that the minimum M2 Pro will vastly outclass the Dragonfly Pro in performance and offer even more of a lead when you upgrade to the M2 Max, which can have as many as 12 CPU cores and 38 GPU cores. The MacBook Pro 14 will be a much faster laptop for any task, whether productivity or creativity. And we feel comfortable saying that without having benchmarked either laptop.

The MacBook Pro 14 enjoys an outstanding 14.2-inch 16:10 mini-LED XDR display at a 3024 x 1964 resolution and running at up to 120Hz. It has wide and accurate colors, incredible brightness, and deep contrast that rivals OLED in its inky blacks. It’s a truly spectacular display that’s great for creators and for media consumers thanks to its outstanding HDR support.

You’ll feel both laptops in your backpack — these aren’t tiny 13-inch machines. But neither is going to weigh you down all that much, and they’re both thin enough to easily slip into a backpack. The MacBook Pro 14 is thinner, though.

The biggest difference will likely be in battery life, something we’ll have to test on both machines. But the M2 Pro and Max CPUs are even more efficient than the M1 Pro and Max, which already provide the best battery life we’ve seen in powerful laptops. We expect the MacBook Pro 14 to provide hours more longevity than the Dragonfly Pro, unless HP has pulled a rabbit out of its hat.

The Dragonfly Pro better be cheap, or it doesn’t stand a chance

The MacBook Pro 14 outclasses the Dragonfly Pro in just about every aspect. We’re guessing that it will be much faster, offer significantly better battery life, enjoy a vastly better display, and have a better keyboard and touchpad. On paper, the HP doesn’t have a chance.

We’ll have to wait to see pricing because the MacBook Pro 14 starts at $2,000 and goes way up from there. You can spend over $6,000 on a fully configured machine. If the Dragonfly Pro wants to win customers over from the MacBook Pro 14, it will have to be inexpensive.