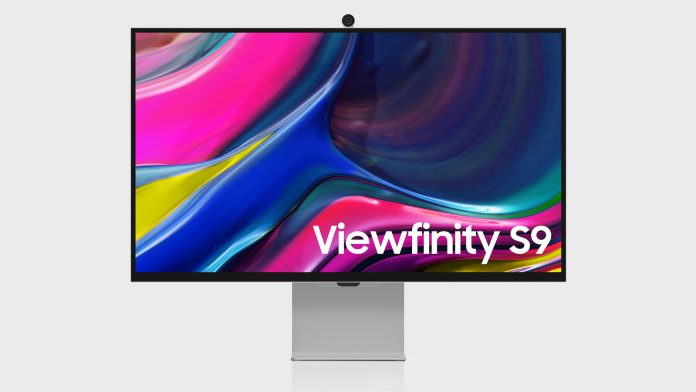 Ahead of CES 2023 this week, Samsung has announced several upcoming additions to its monitor lineup, and perhaps the most interesting model for Apple users is the ViewFinity S9, Samsung’s first 27-inch 5K display that will compete against Apple’s Studio Display.

27-inch 5K displays remain fairly rare, but Apple has long embraced the higher pixel density for its ability to display true Retina-quality content at reasonable size. Just like the Studio Display and Apple’s former 27-inch iMac, Samsung’s ViewFinity S9 will feature a 5120 x 2880 display, and its wide color gamut will cover 99% of the DCI-P3 spectrum while HDR600 support improves shadows and highlights. The ViewFinity S9 features a matte finish to minimize glare, is equipped with USB-C/Thunderbolt 4 connectivity, and includes a 4K SlimFit camera.

Pricing has yet to be announced, but it will be launching “early” this year. The M8 now pivots up to 90 degrees for a portrait orientation, and it supports VESA standards for those who prefer different mounting solutions. The included 2K SlimFit camera has been upgraded, and there’s new mouse support for many of the included apps on the display such as Samsung’s SmartThings Hub for managing connected home devices and Smart Hub for dedicated apps like Prime Video, Netflix, YouTube, and more.

Pricing and a release date have yet to be announced.

In addition to the ViewFinity S9 and Smart Monitor M8, Samsung is also announcing several new Odyssey gaming monitors including the Odyssey Neo G9, a 57-inch 32:9 super ultra-wide curved display at 7680 x 2160 resolution with DisplayPort 2.1 and a 240 Hz response rate.

Finally, there is the Odyssey OLED G9, a 49-inch curved OLED gaming monitor with 0.1 ms response time and 240 Hz response rate. Both displays will launch “later” this year with pricing yet to be disclosed.