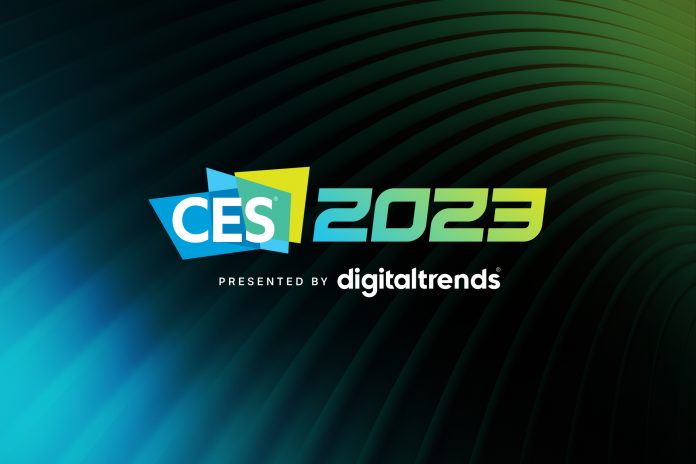 AMD announced the upcoming release of its Ryzen 7000 mobile processors during its CES 2023 keynote. With a strong focus on performance and efficiency, these CPUs will soon arrive in some of the best gaming laptops, but AMD is not just targeting gamers.

The lineup includes processors made for all kinds of laptops, and today, AMD gave us our first glimpse at the Ryzen 7040 “Phoenix” and the Ryzen 7045 “Dragon Range.” Here’s everything you need to know about them. 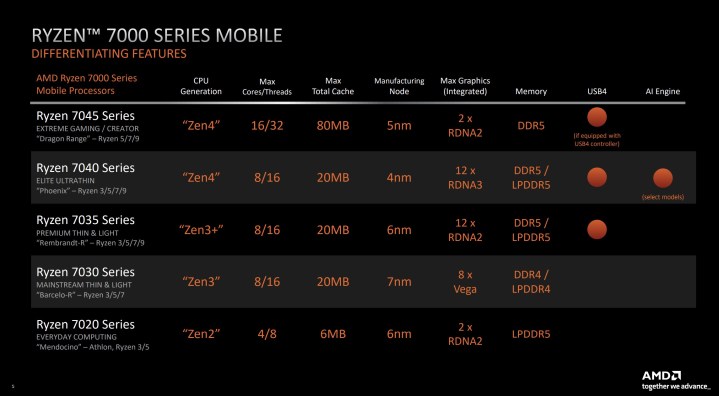 Before we delve deeper into the world of these new Ryzen CPUs, let’s take a quick look at AMD’s naming scheme for this generation. It’s worth noting that not every mobile Ryzen 7000 chip will be based on the Zen 4 architecture. The second to last digit of the number reveals whether we’re looking at a Zen 2, Zen 3, Zen 3+, or Zen 4 part. This could prove to be confusing for some shoppers, although the Ryzen 7020 (Zen 2), the Ryzen 7030 (Zen 3), and the Ryzen 7035 (Zen 3+) are still new chips and aren’t part of the previous generation.

The best processors in this generation of mobility chips are the AMD Ryzen 7045-series chips. The flagship AMD Ryzen 9 7945HX comes with 16 cores, 32 threads, a massive 80MB of combined L2+L3 cache, and a clock speed of up to 5.7GHz.

In terms of performance, AMD claims that the Ryzen 9 7945HX was a whopping 78% faster than the last-gen 6900HX in productivity and multitasking, and the CPU also saw massive gains in gaming. AMD also compares the 7945HX to Intel’s Core i9-12900HX, showing off tests that put the AMD Ryzen 7045HX way ahead of Intel, ranging from an uplift of 24% to 169%. However, it’s important to note that Intel just announced its Raptor Lake mobile CPUs at CES as well.

So far, the Ryzen 7045-series consists of the following:

The AMD Ryzen 7045 range will arrive in laptops starting in February 2023, with the first five laptops being made by Alienware, Asus, and Lenovo.

Coming up next is the AMD Ryzen 7040 series, with a strong focus on being able to tackle artificial intelligence (AI) workloads while maintaining long battery life. These Zen 4 chips were built based on a 4nm process node and come equipped with RDNA 3 onboard graphics as well as AMD’s new XDNA AI engine architecture.

We’re moving down to Zen 3+, which will presumably power up some more budget-friendly laptops equipped with AMD Ryzen 7035-series chips. These CPUs offer access to onboard Radeon 680M graphics, DDR5 and LPDDR5, PCIe Gen 4.0, and USB 4. AMD promises superb battery life, up to 15% longer than Intel’s Core i7-12700H, while serving up performance upgrades across the board.

Lastly, AMD is also launching some Ryzen 7030 and Ryzen 7030 Pro mobile processors, which are based on the Zen 3 architecture and a 7nm process node, equipped with up to 8 cores. The Ryzen 7030 lineup is mostly aimed at tackling productivity-related tasks, but AMD reveals that the laptops should also be able to run esports titles just fine. On the other hand, the Ryzen 7030 Pro prioritizes security and is aimed at professionals.

AMD’s mobile lineup for this generation is truly massive. While the split between Zen 4, Zen 3+, and Zen 3 can be confusing at first, it’s clear that AMD is trying to tap into as many markets as possible. The first AMD Ryzen 7000 laptops will begin to show up on the shelves in February, so it won’t take long before we’ll be able to learn more about their performance.

AMD had a lot more to announce, so make sure to read our roundup of everything AMD announced at CES 2023.