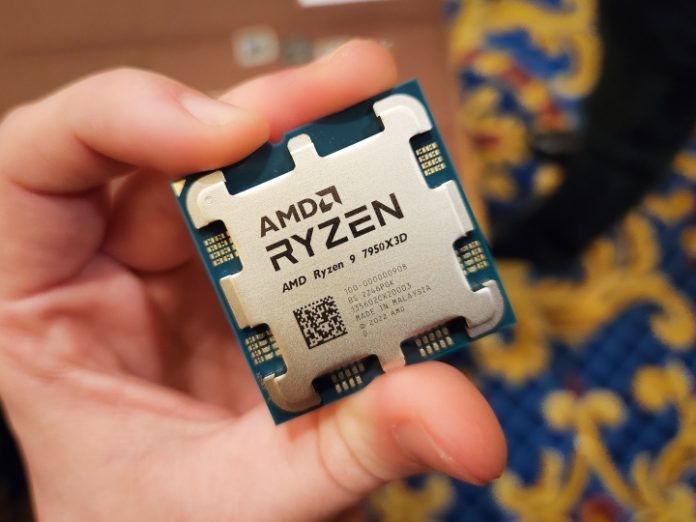 The Ryzen 9 7950X has been AMD’s best processor for a while, but it now faces some serious competition. We don’t just mean AMD’s long-standing rival, Intel. AMD itself has created a CPU that might be even better than the flagship: the Ryzen 9 7950X3D.

Equipped with a massive 3D V-Cache, the Ryzen 9 7950X3D might turn out to be the world’s fastest gaming processor. AMD’s new processor isn’t here yet, so for now, we’re relying on the specs and AMD’s benchmarks until we have the processors in hand.

While the initial Zen 4 lineup was great to see, many were eagerly awaiting the return of AMD’s 3D V-Cache — but that didn’t come until later. Announced at CES 2023, the Ryzen 9 7950X3D will be released alongside the Ryzen 9 7900X3D and the Ryzen 7 7800X3D, but unfortunately, we don’t know the exact release date just yet, and the pricing also remains a mystery.

However, there have been rumors floating around about a possible February release date. AMD itself had seemingly leaked the date on its own website, but it claimed that this was a mistake — which we can easily believe — and we haven’t heard a peep ever since. AMD confirmed the processor will release in February, but it has yet to confirm a date.

Both the Ryzen 9 7950X and the Ryzen 9 7950X3D are based on AMD’s Zen 4 architecture — but the latter comes with AMD’s 3D V-Cache. This means that AMD has stacked the cache on top of the processor, which results in a much larger cache, and that’s the main difference between the two processors. The 3D part comes with 144MB of combined cache, while the regular CPU only comes with 80MB.

We’ve had the chance to get up close and personal with the Ryzen 9 7950X, and you can check out our in-depth review of the CPU for more information. As far as a short summary goes, we’ll say one thing — this is one exquisite CPU, and its performance is worthy of a current-gen flagship. Right now, it’s amongst the best processors on the market and only high-end chips like the Intel Core i9-13900K can hope to beat it.

In fact, the Ryzen 9 7950X trades blows with the Core i9-13900K in most of our tests. It was only marginally slower in the Geekbench 5 multi-core test, and while Intel’s lead increases ever so slightly in single-core operations, it’s still negligible. The same is true in most gaming scenarios — AMD and Intel are almost equal. This might change now that Intel has released the Core i9-13900KS, but then again, AMD will soon strike back with the Ryzen 9 7950X3D.

AMD’s Ryzen 9 7950X handled most games very well across our test suite. When paired with an Nvidia RTX 3090, the rig maintained an average of 128 frames per second (fps) in Cyberpunk 2077 — the exact same result as the Core i9-13900K. All in all, it’s safe to say that the Ryzen 9 7950X can handle itself very well in gaming scenarios. It’s probably overkill for most things, really, but it’s a solid pick for high-end builds.

Things get interesting when we compare the Ryzen 9 7950X to the previous-gen 3D V-Cache beast, the Ryzen 7 5800X3D. The AMD Ryzen 9 7950X3D is, unfortunately, still an enigma, so we can’t draw any accurate comparisons there. Until the chip is released and we’re able to benchmark it ourselves, we won’t know its true potential. With that said, we can still examine the performance of the Ryzen 9 7950X and make some guesses as to the Ryzen 9 7950X3D.

Although the Ryzen 7 5800X3D belongs to the last generation of CPUs, in gaming, it continues to shine. Sure, the new flagship beats it on average, but the gains aren’t massively significant — we’re looking at around 10 fps more here.

AMD’s first 3D V-Cache chip was quite revolutionary and it continues to bring great value for the money, being significantly cheaper than the Ryzen 9 7950X. We’re expecting the Ryzen 9 7950X3D to be a similarly great deal, although much more expensive. All we have to go on right now are AMD’s own estimates.

The manufacturer claims that the 7950X3D will be up to 24% faster than Intel’s Core i9-13900K in gaming as well as anywhere between 4% to 52% in productivity-oriented tasks. That’s a surprise, because its 3D V-Cache predecessor was very much a gaming beast, but not so much a productivity workhorse.

Which CPU is the best of them all?

As you may have seen in our review of the Ryzen 9 7950X3D, we’ve had very little to complain about. Being forced to use DDR5 RAM is a bit expensive, but you have to use DDR5 memory on the Ryzen 9 7950X3D too, so in this case, it’s irrelevant. Aside from that, it’s quite close to perfection if what you want is the fastest processor available — provided you’re choosing AMD over Intel.

Of course, many users simply don’t need a CPU this good. Even if you’re into AAA games, you can safely pick up the Ryzen 7 7800X instead and still see good results. You’ll need a solid graphics card to pair the CPU with, but that’s a given for gaming these days.

If you do want to go down the high-end route, the Ryzen 9 7950X is a powerful CPU that will breeze through most things you throw at it. At the time of writing, you can often find it discounted, and at , it’s a good deal.

We don’t yet know the performance of the upcoming Ryzen 9 7950X3D. We’ll find out soon — the chips are surely coming out this February. We can’t say anything with any certainty until then, but it’s not a stretch to assume that the 3D chip will outperform the current flagship. If it’s anything like the previous generation, it will be the gaming champion, fit to destroy both AMD and Intel processors.

Will it be a good deal? That depends on the price and whether you really need so much power in a processor.

If you want to shop right now and you need an enthusiast-grade CPU, get the Ryzen 9 7950X and don’t look back. It’s a great processor that will last you for years. However, if you’re willing to wait a month, do so — the Ryzen 9 7950X3D is likely going to be even better.