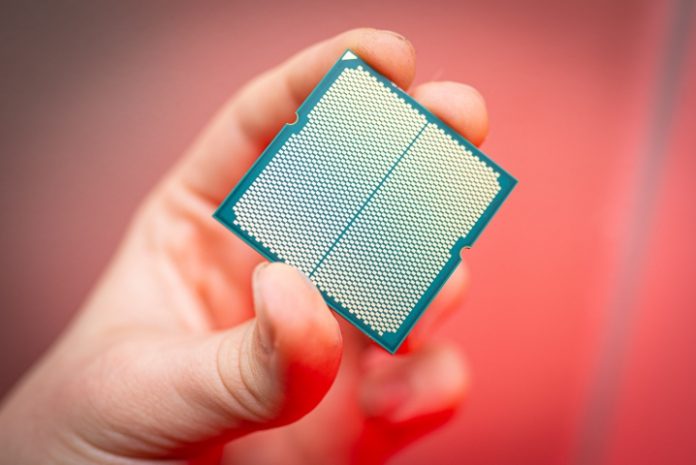 AMD’s Ryzen 7000 CPUs haven’t had the best reception, but Team Red is correcting course. The new Ryzen 5 7600 is proof of that. It’s slightly slower than the Ryzen 5 7600X based on the spec sheet, but it’s around $70 cheaper, comes with a bundled cooler, and promises nearly identical performance.

After testing the processor myself, I can confirm — the Ryzen 5 7600 is one of the best processors you can buy right now. With a couple of clicks, it can achieve identical performance as the Ryzen 5 7600X, and it comes in at a cheaper price.

The Ryzen 5 7600 also has a much lower-rated power draw. It tops out at 65 watts, and AMD has claimed much better efficiency compared to X-series parts. Even with similar specs, the lower power could make a difference in performance. On the other hand, that makes the processor ideal for small form factor builds where power and thermals are a concern.

The Ryzen 5 7600 comes bundled with AMD’s Wraith Stealth cooler, while the Ryzen 5 7600X doesn’t come with a cooler at all. That saves you around $50 on a CPU cooler, and even more if you want an all-in-one liquid cooler.

You’re getting a less powerful processor with the Ryzen 5 7600 — though, not by much, as I’ll get to next — but you’re still getting six Zen 4 cores, 38MB of cache, DDR5 memory support, and a just slightly slower boost clock speed. For value, the Ryzen 5 7600 is the clear winner.

The Ryzen 5 7600X sells for less than list price at the moment, however. It’s around $275, following reportedly poor sales for AMD’s initial batch of Zen 4 processors. Still the non-X part is cheaper and it includes a cooler. 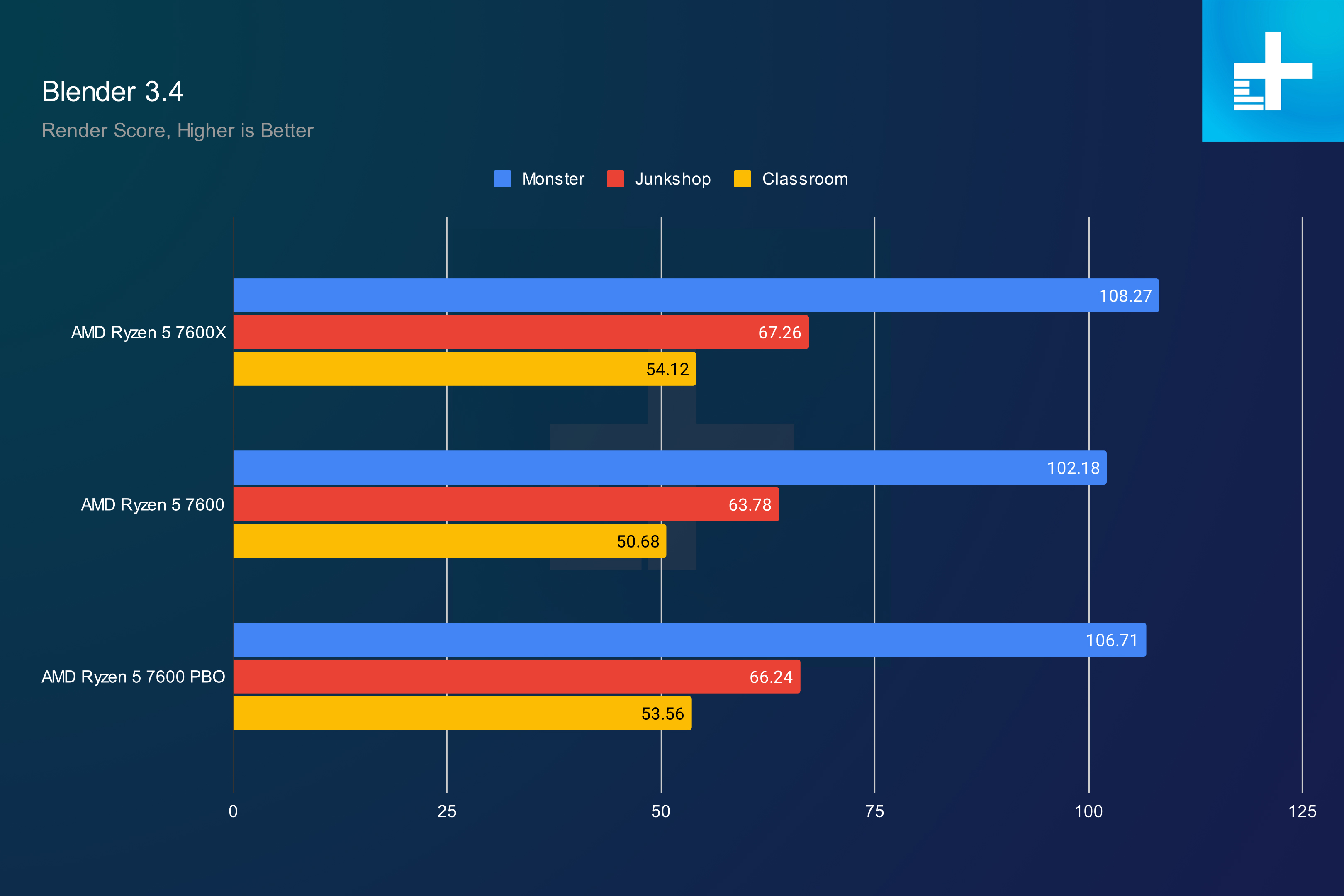 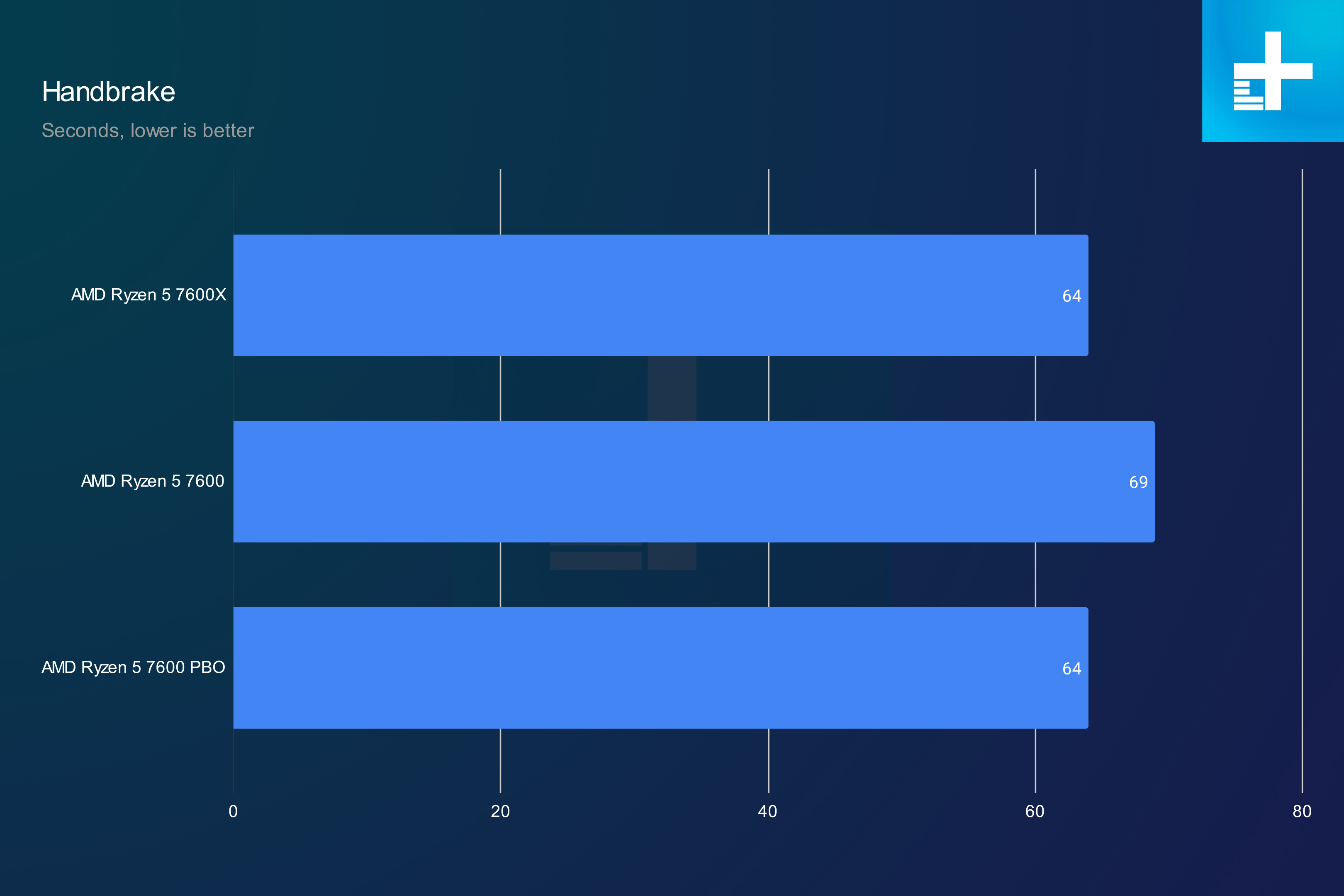 First a bit on overclocking. For my testing, I used AMD’s Precision Boost Overdrive (PBO); no fancy overclocks or dense manual tuning. That required downloading the Ryzen Master app, choosing the Auto OC and All Core curve optimizer settings, waiting for about 30 minutes for the utility to optimize the system, and rebooting. That’s all, no voltage or clock speed adjustments needed.

That’s the single most important thing you can do with the Ryzen 5 7600. In Cinebench’s multi-core test, the Ryzen 5 7600 went from 8% behind the Ryzen 5 7600X to 1% behind. We can call that identical performance. In a real-world app like Handbrake, I saw the same thing. The Ryzen 5 7600 took 8% longer than the X-series part, but with PBO, they transcoded in the same amount of time. 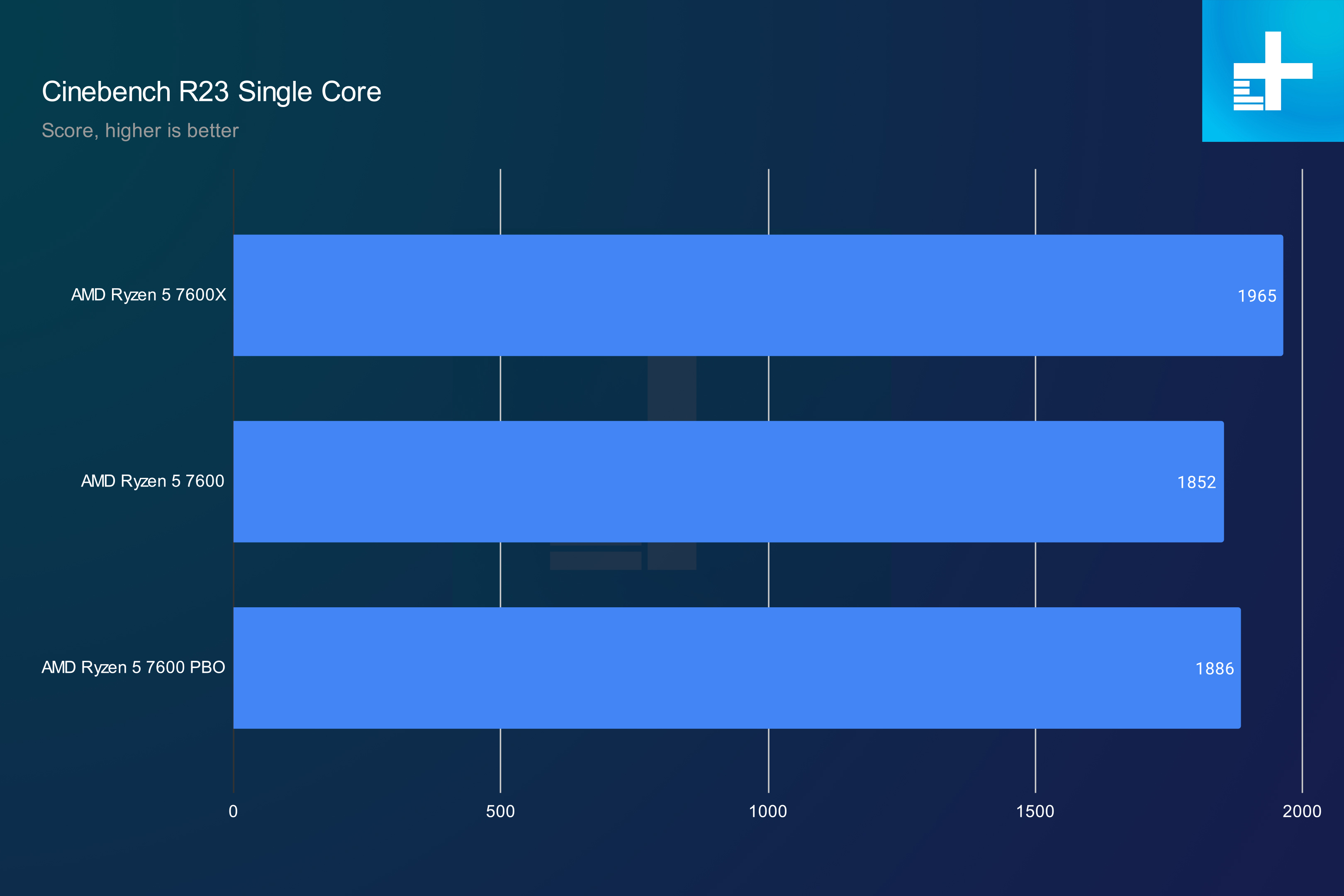 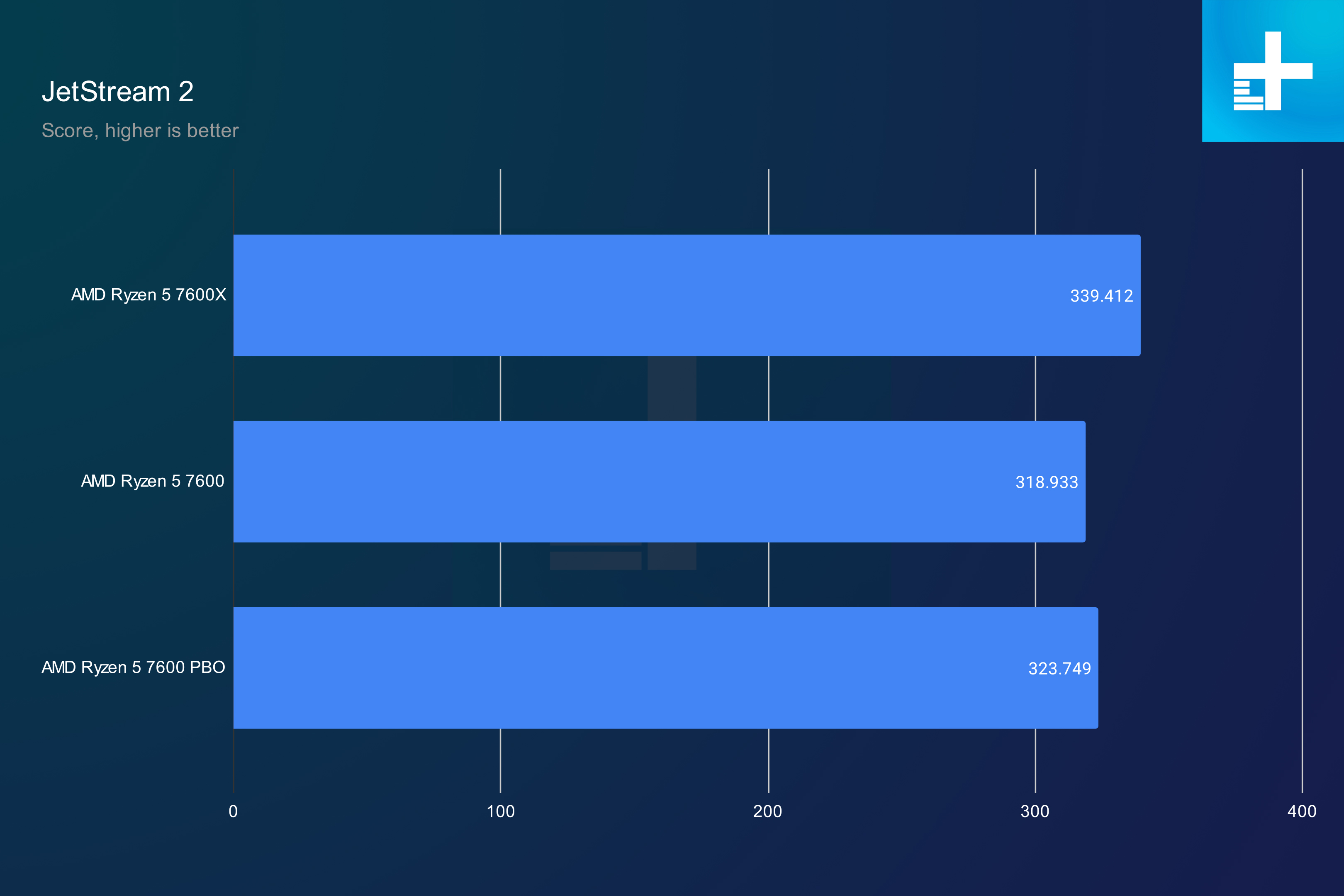 The Ryzen 5 7600X still has a minor lead in some areas, though. In single-core tests, for example, overclocking did very little to boost the Ryzen 5 7600, giving the X-series chip around a 6% lead. That was particularly true in the web-browsing benchmark JetStream, but let’s be honest: neither one of these processors struggles when it comes to running web apps.

And some single-core tasks still see a benefit from overclocking. Y-Cruncher calculates 500 million digits of Pi, and it’s particularly good for showing off the AVX-512 support in Ryzen 7000 CPUs. The Ryzen 5 7600X is clearly ahead before using PBO, but the chips are evenly matched after.

Although it’s no secret that overclocking your CPU produces extra performance, it’s essentially free on the Ryzen 5 7600. Given the processor’s low wattage and excellent efficiency, even a two-click overclock in Ryzen Master nets around 5% to 10% more performance, all while costing $70 less than the Ryzen 5 7600X. 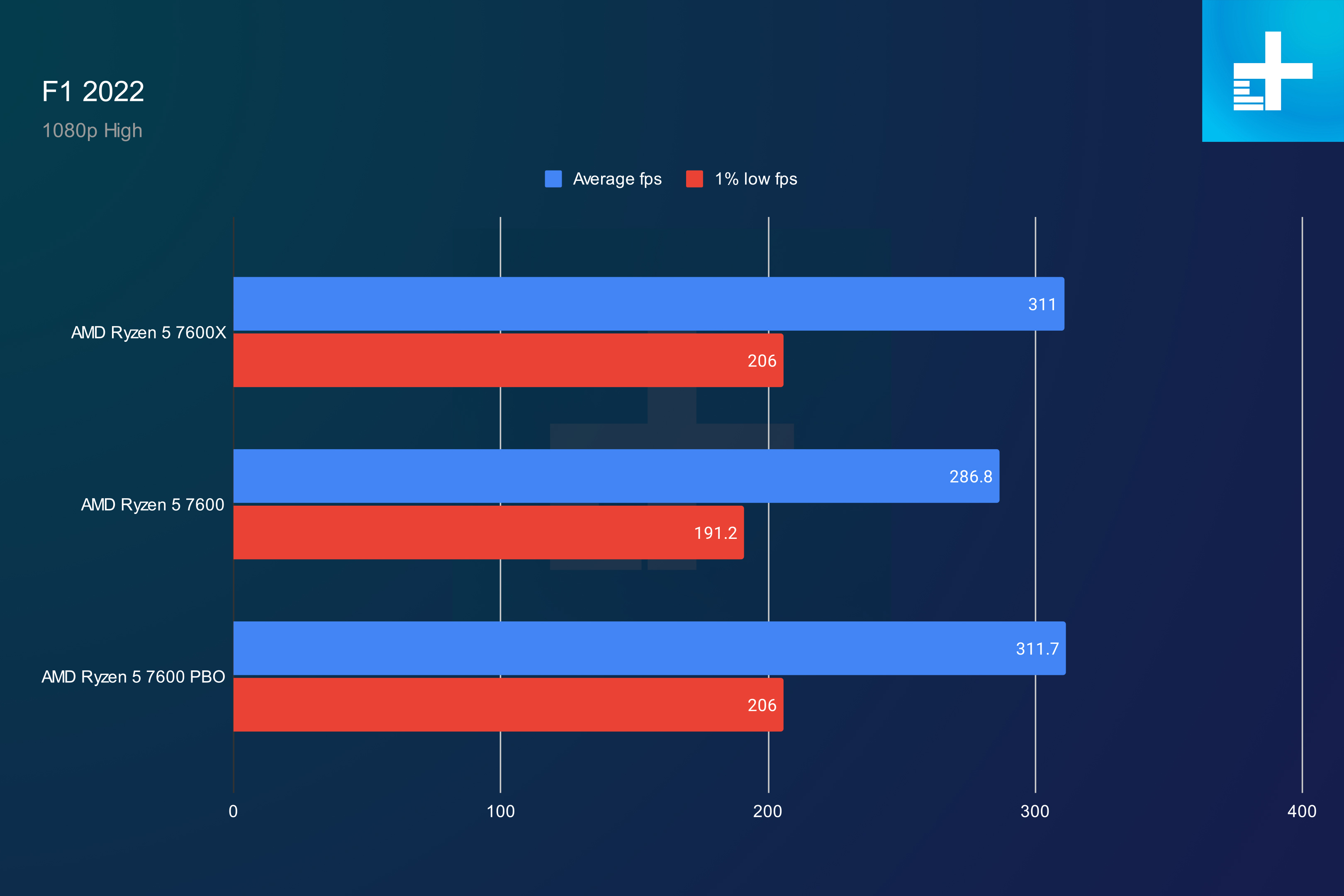 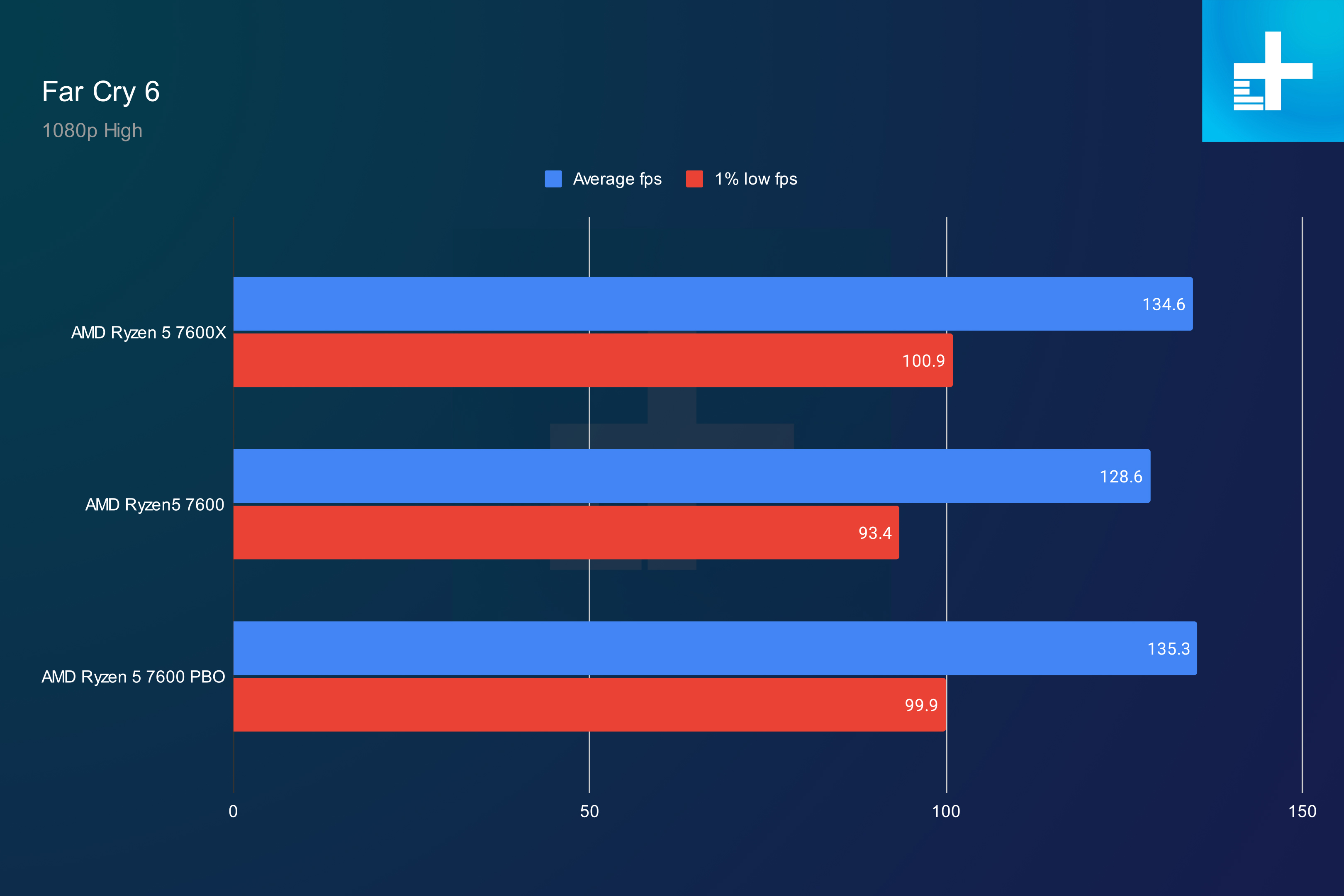 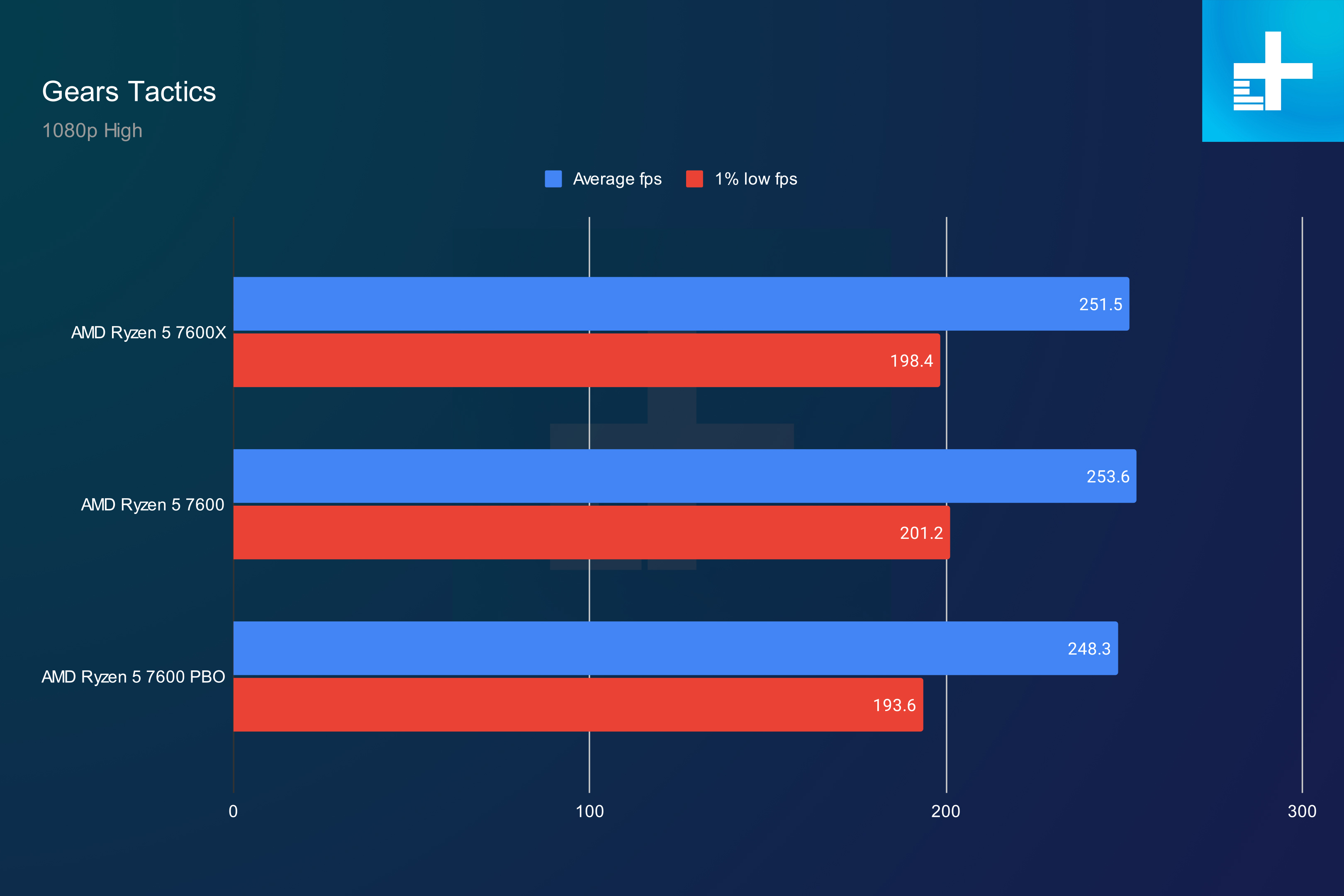 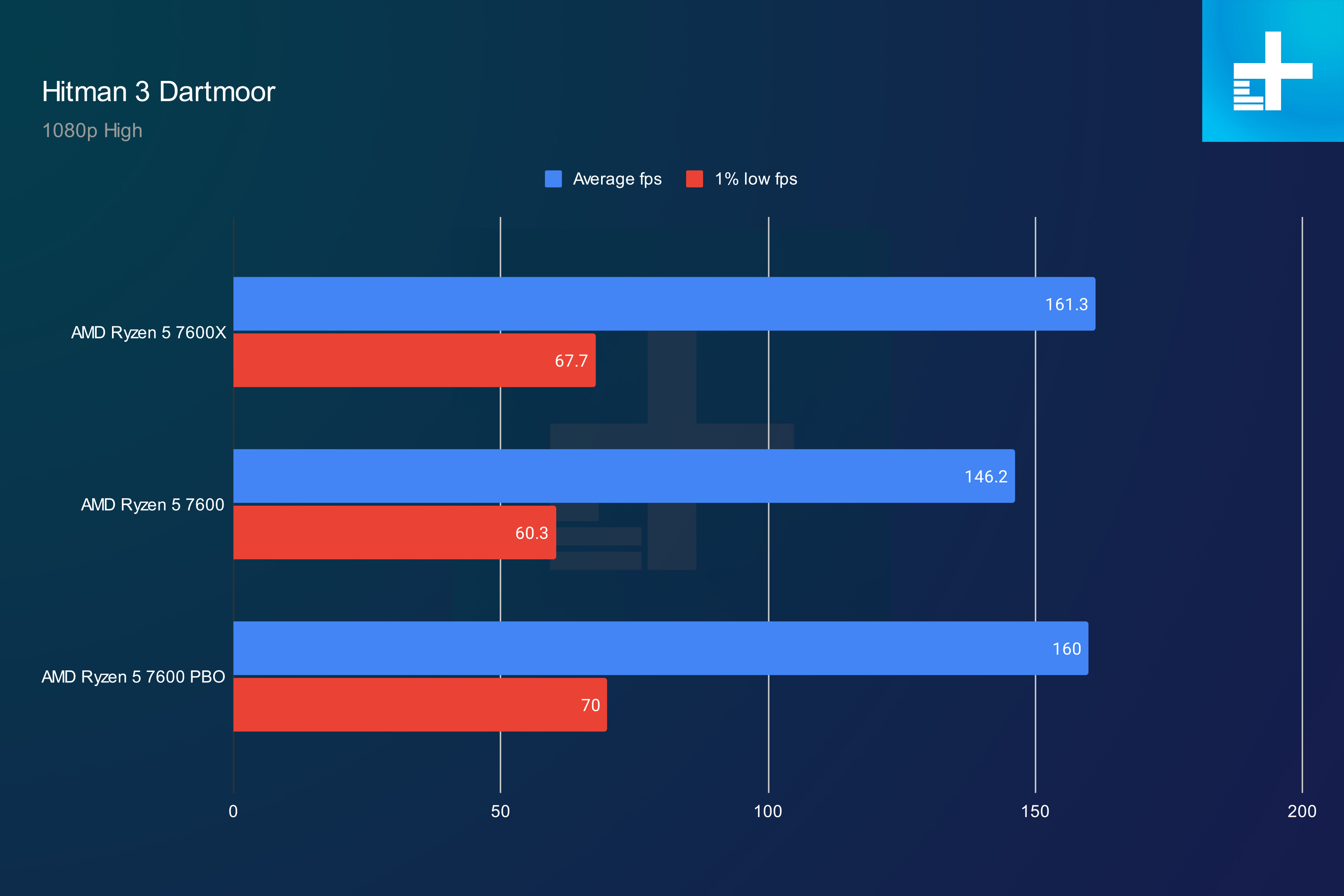 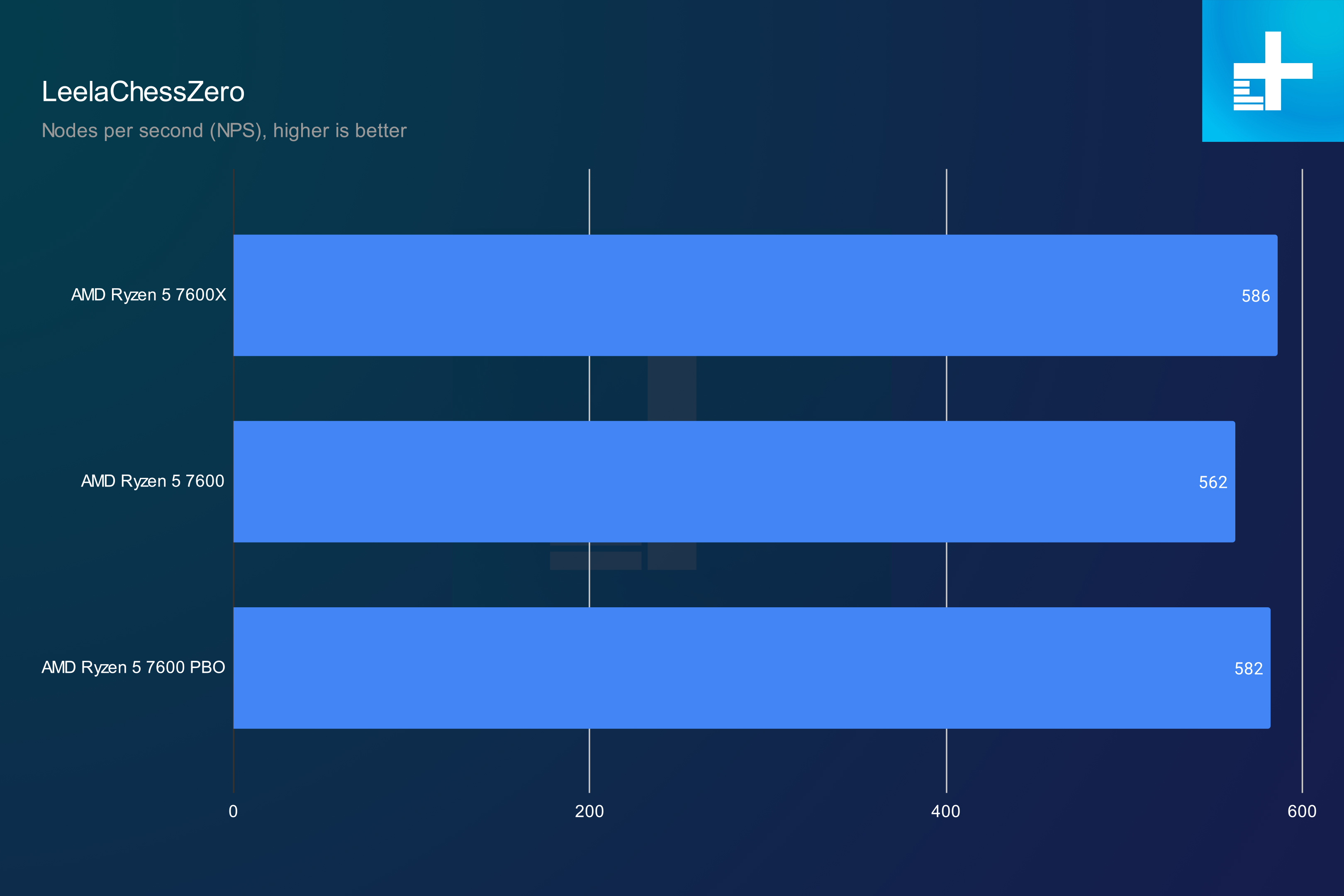 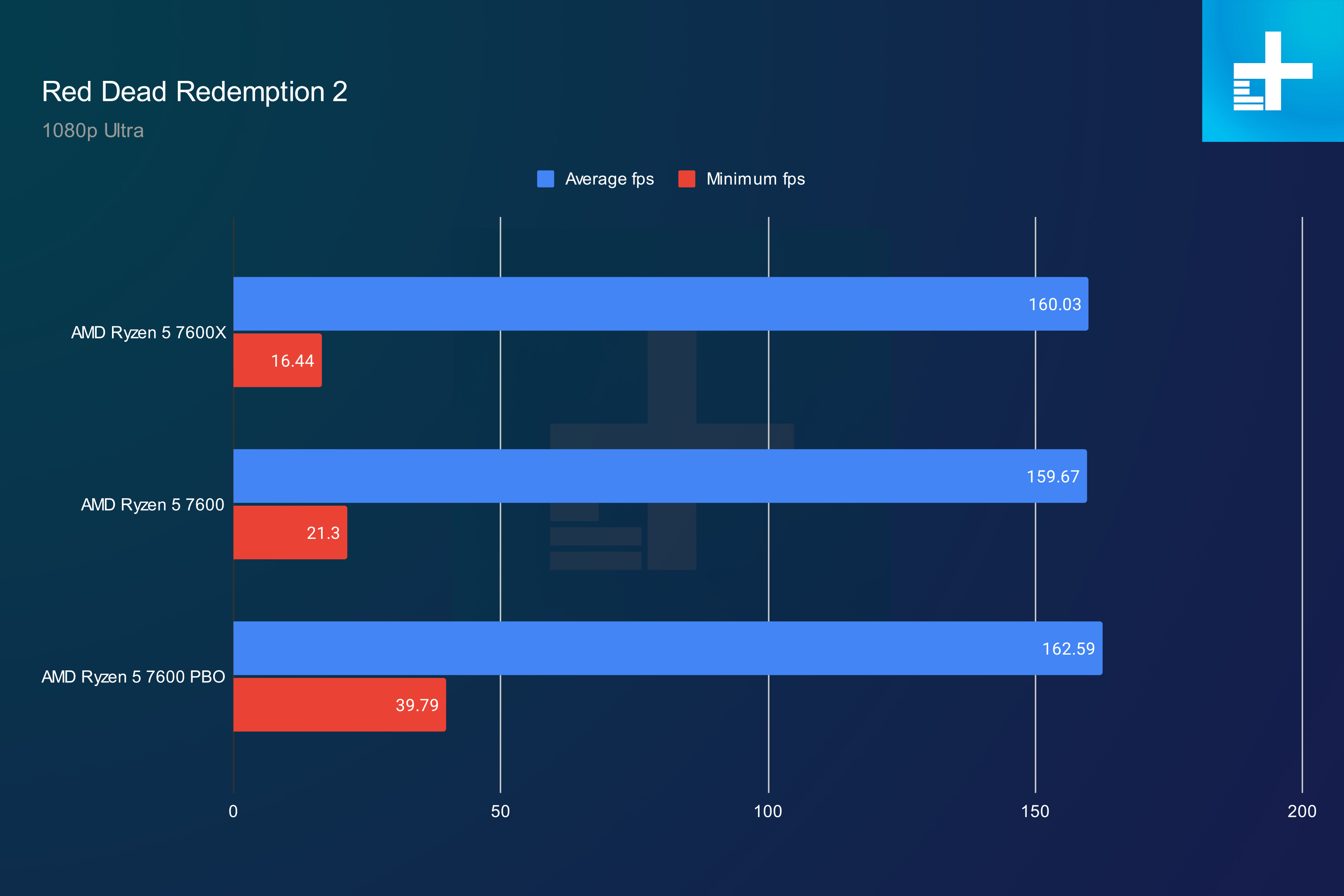 I’m comparing an overclocked CPU to one that isn’t overclocked, but that’s what’s so surprising about the Ryzen 5 7600. Even with PBO applied, it’s much more efficient than the Ryzen 5 7600X. For every 10 watts spent, you’re getting around 10 extra frames per second (fps) with the Ryzen 5 7600, even after applying PBO.

You may not need a high-end processor for gaming, but there’s no doubt that the Ryzen 5 7600 is offering an advantage over the Ryzen 5 7600X. With PBO, performance is identical, all while the Ryzen 5 7600 offers better efficiency, a bundled CPU cooler, and a lower price.

There’s no contest here: The Ryzen 5 7600 is the better option out of the two. It’s cheaper, offers near identical performance with PBO applied, and it comes with a bundled CPU cooler. This is the processor we should have seen from the start from AMD.

AMD’s latest generation hasn’t done well, despite flagship chips like the Ryzen 9 7950X offering chart-topping performance. Value has always been the problem. The Ryzen 5 7600 is the solution, offering a much more efficient CPU at a lower price, all while keeping platform features like the AM5 socket and DDR5 intact.