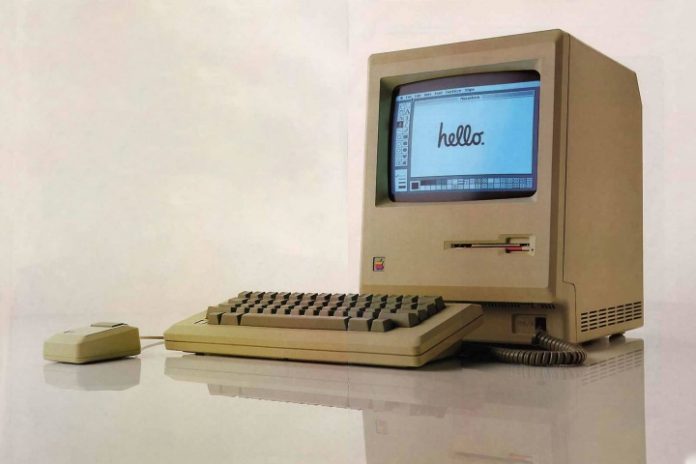 Today is the 40th anniversary of the Apple Macintosh computer, a revolutionary machine that changed computing forever. Here’s what made the Macintosh 128K unique.

In the 1980s, the IBM PC was the computer that overwhelmed every other personal computer design. Before its introduction in 1981, serious computers were massive and costly machines that didn’t belong in a home. Even small businesses resorted to adding machines and calculators for daily use. For more complicated work, accounting firms and businesses that specialized in computer processing were used. Apple set out to change that in 1984 with the Macintosh.

Of course, personal computers existed before 1981 and Apple was a major player, competing against Commodore, Radio Shack, and others. These relatively low-cost devices with 8-bit processors often relied on connecting to a television instead of a monitor to keep costs low. Programs and data were saved to audio cassettes. This was exciting for hobbyists but unworthy of serious work.

When the IBM PC arrived with a much more reliable design and a high-speed Intel 8088 processor that could handle up to 16 bits of data at a time, it was a momentous occasion that forced rapid change. IBM was the most respected name in serious computing and it instantly took over the personal computing market. Apple started preparing an answer with a high-end business computer, different from anything seen before by the general public. This wasn’t the Macintosh, however, but the Apple Lisa, one of the first computers to come with a mouse.

The Apple Lisa had a revolutionary design but it was targeted at big businesses and priced at just under $10,000. That’s a high cost even in 2023 and was well beyond the reach of most businesses in 1983. Thankfully, Apple didn’t stop there. Apple co-founder Steve Jobs launched a pet project that ran alongside the development of the flagship Lisa computer. The Macintosh 128K, named for its relatively large amount of memory, stole many of the best parts of the Lisa technology, simplified the design, and dramatically cut costs to make a personal computer that was within reach of a much larger audience at $2,495.

This might be the same approach that Apple will use with its AR/VR headset, launching a very expensive model that fires the imagination and following up with a lower-cost model soon after. If the Apple Reality Pro really does launch this year, a much more affordable Reality One model will likely follow in 2024.

Back to the Macintosh story, Apple’s budget model challenged the IBM PC’s 8/16-bit Intel 8088 chip with a Motorola 68000 processor, a 16/32-bit chip that could handle twice as much data in a single instruction. The differences were stark at the surface as well. The Macintosh was tiny compared to an IBM PC and the computer’s motherboard and a floppy disk drive were built into the same case as its small, but sharp, black and white monitor, making for a small footprint on a desk. This was an important consideration at a time when desks weren’t designed for computers.

The most important difference was the mouse and graphical user interface which made a computer much easier for anyone to learn to use. Apple didn’t invent this concept that was developed at Xerox Palo Alto Research Center. The Macintosh was, however, the computer that took this idea out of the lab and demonstrated that this should be the way of the future.

Combining the Macintosh with an Apple ImageWriter or LaserWriter made WYSIWYG (what you see is what you get) desktop publishing a reality and became the number one reason to choose a Macintosh over an IBM PC. Here’s a video of Jobs introducing the Macintosh that macessentials posted on YouTube.

Microsoft stepped in with Windows, a mouse-driven user interface that gave the PC similar capabilities. Still, Apple had already established itself as the prime choice for print work and it took many years for Windows to catch up in that industry. For most users, the lower-cost PC was still preferable and Windows flourished.

With the launch of Apple Silicon, the Mac is once again challenging the Windows PC but Windows is so pervasive that the Mac might never catch up and become the most popular personal computer. Perhaps that’s one of the reasons why Apple is so keen on alternate technologies like the iPhone and iPad. Apple has an opportunity to change computing again by championing new technology that needs help to move into the mainstream.