One of the most important tools in photography or videography is not the camera, it’s lighting. Even a bad camera can take a good photo or video with the proper lighting. Photographers use light to sculpt a subject in the same way a painter uses a brush and paint.

For that reason, I’m always on the lookout for new lighting tools to use. Over the years, I’ve experimented with big studio strobes, small camera flashes, various hot lights, and now LED lights such as Zhiyun’s Fiveray F100 Light Stick.

Zhiyun is more widely known for its lineup of popular camera and smartphone stabilizers, but the company began dipping its toes into lighting with the Fiveray FR100C earlier this year. Now, Zhiyun is back with an upgraded pro version dubbed the Fiveray F100.

Luckily, we were able to get our hands on one from Zhiyun for this review.

Like many other light sticks, the Fiveray F100 uses a slender design measuring nearly 20-inches in length, is almost two-inches wide, and weighs in at a little over two pounds. It has a handle at the bottom with a rubberized grip to make it easier to hold with a small display, scroll wheel, and power button on the back used for controlling the light.

The back is lined with six fans for cooling, and there is a 1/4-inch threaded hole on the bottom that perfectly fits a tripod or most light stands. On the side, there is a USB Type-C and barrel connector hidden under a flap that is used for charging the six built-in 2600mAh batteries that power up the F100. 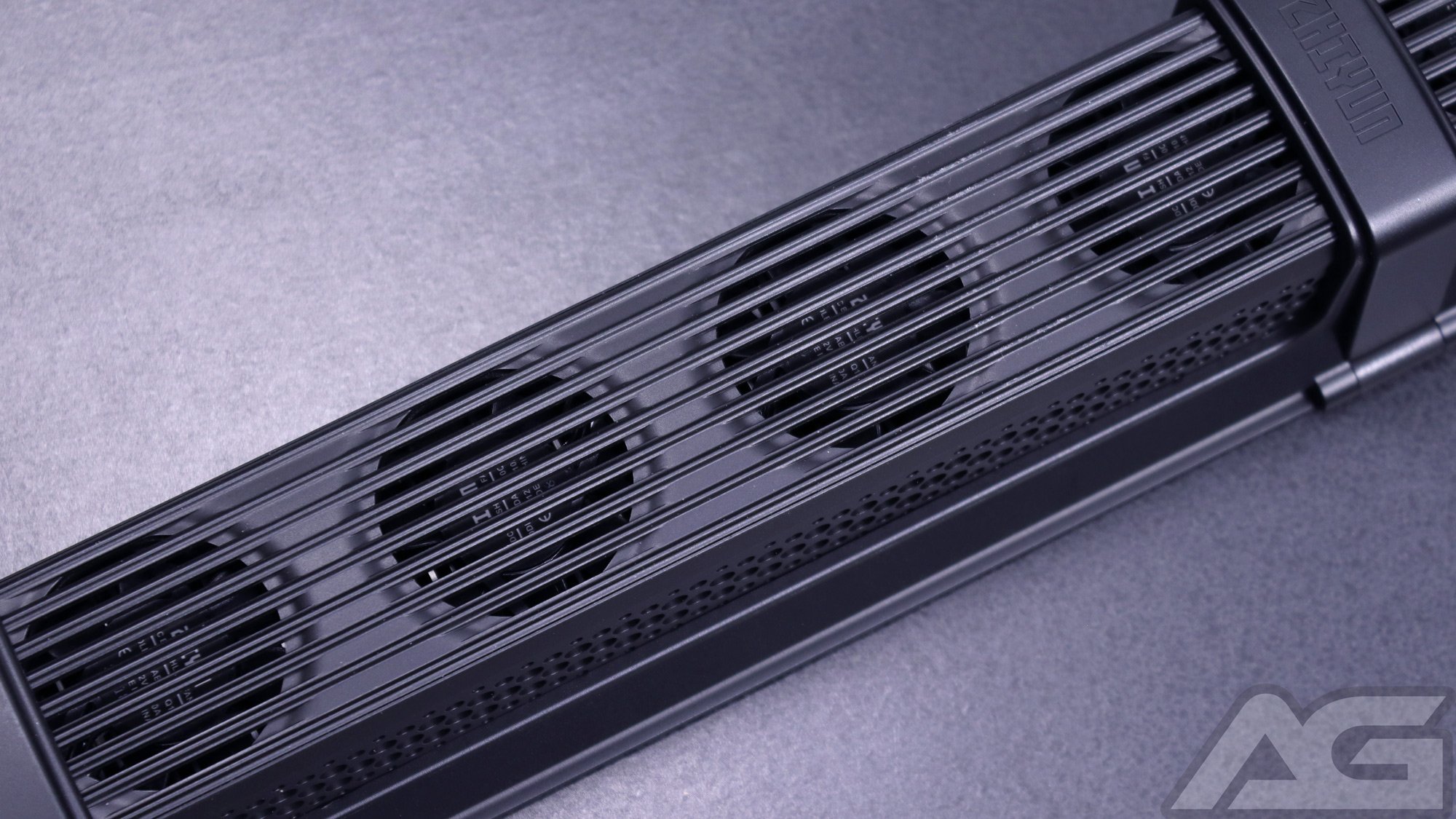 Along with the F100 Light Stick, there is a padded case and a few light modifiers which helps set it apart from the previous FR100C model. The case feels fantastic and has plenty of space for the F100, the included modifiers, and more. There’s even a handle to make carrying it around easier. 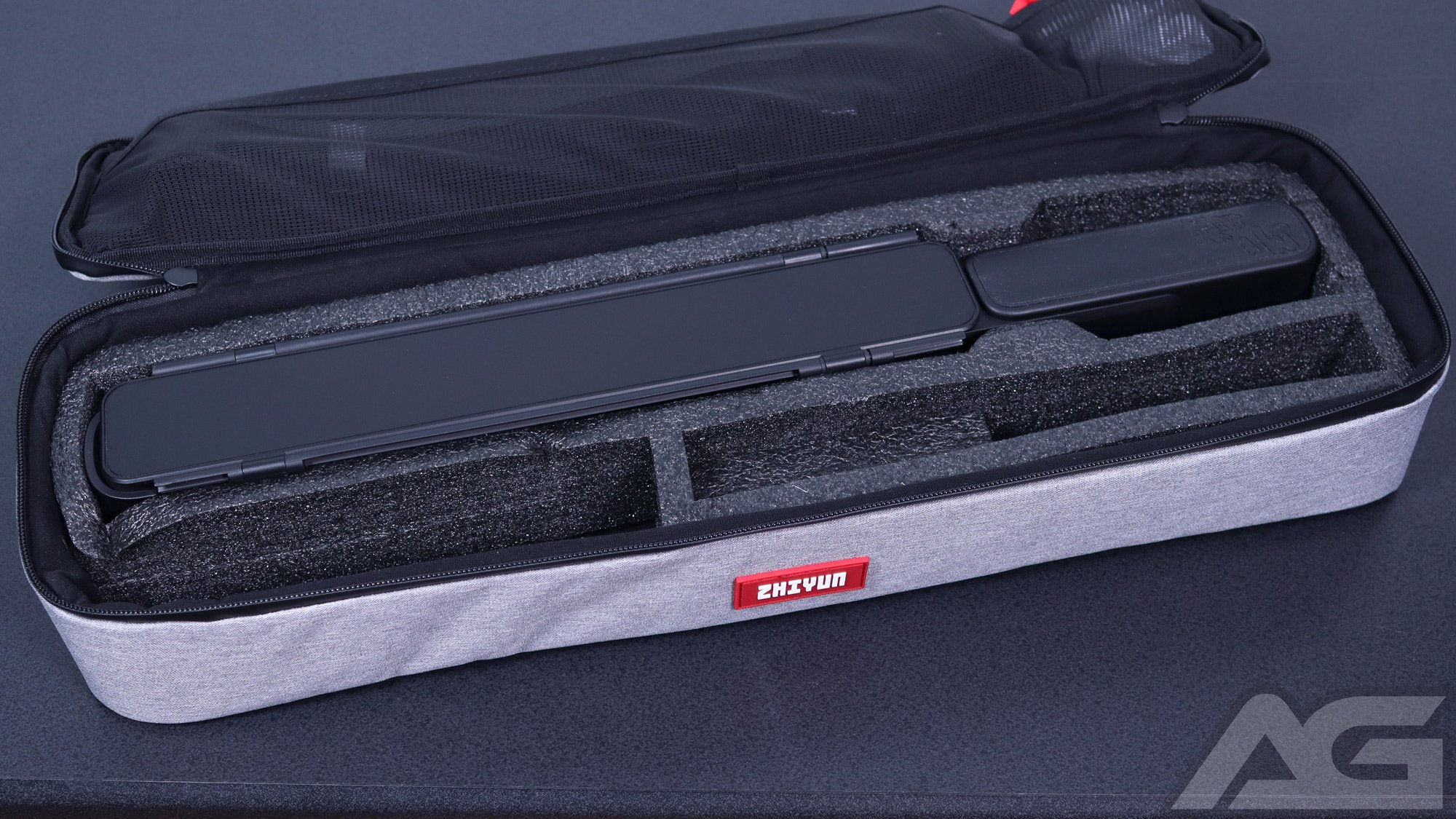 Speaking of modifiers, the Fiveray F100 comes with all the basic attachments you’d need to shape light. There’s a bracket that snaps onto the unit with barn doors attached that allows you to slide on a softbox or grid. 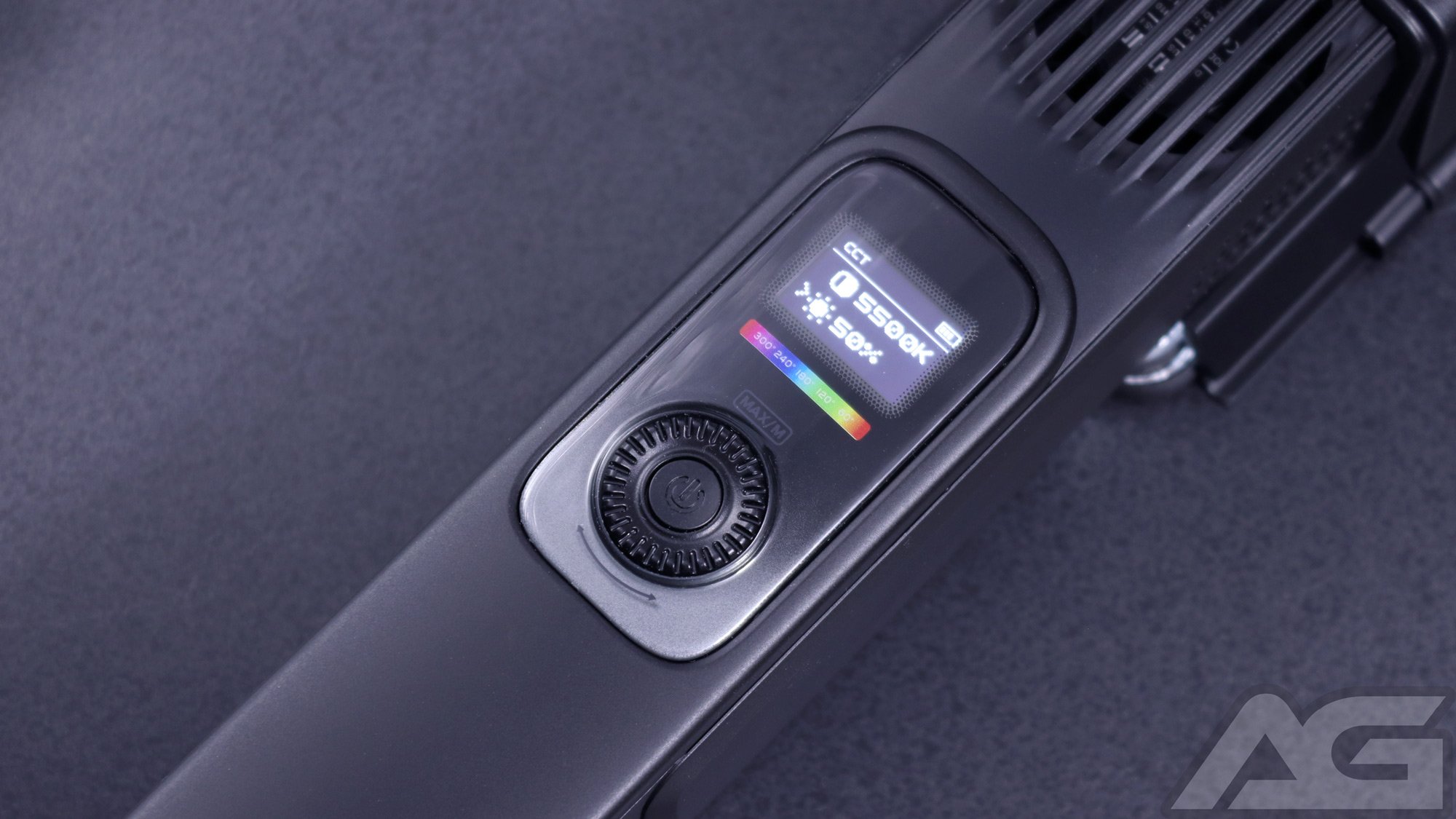 Using the Zhiyun Fiveray F100 is fairly simple. After powering on the light stick, you can use the power button to swap between options on the display, while the scroll wheel will adjust the value you have selected.

Pressing the top button will cycle you through the three different modes on the F100, including standard lighting for photos and videos, an HSI mode for RGB lighting, and a video effects mode.

All of these modes work remarkably well, with the standard lighting mode giving you the ability to change the color temp between 2700K-6200K, as well as being able to adjust the intensity. The HSI mode gives you access to a wide range of colors and has controls for Hue, Saturation, and Intensity of the light. While the video effects mode is very useful for filmmakers featuring standards such as candlelight, flickering TV, lightning, and more.

Navigating and adjusting the different values works well, and bonus tip, double pressing the power button will quickly jump you to the first value, the middle, or the end. That makes it much quicker to change the brightness, color, or other settings without having to scroll the wheel for days.

The Zhiyun Fiveray F100 is quite small and dimmer than the lights I normally use coming in at only 100W or 20708 lux. However, I soon found that it was not quite as dim as I thought, it was just a more tightly focused beam of light than I’m used to working with.

Regardless, I still needed to bump my ISO up to 400 or 800 instead of the usual 200 that I typically shoot at. That’s still workable for most cameras these days, and even though I lost some intensity, I gained more freedom and creative choices with my lighting using the F100.

Zhiyun Fiveray F100 with no modifiers

Usually, I’m lugging around heavy lights with big modifiers searching for plugs to power them, running extension cords, or charging tons of batteries to power up pocket strobes. Not so with the Zhiyun Fiveray F100. This compact light stick and all of its modifiers are lightweight and ultra-portable.

They can be used attached to light stands or tripods using the mounting screw on the bottom or handheld. Although, I’d feel a little uneasy about mounting it sideways putting all that stress on the screw mount, and despite how lightweight the F100 is, holding it handheld can get a little tiring after a bit. Still, I found a variety of ways to mount and handhold the F100 while shooting. 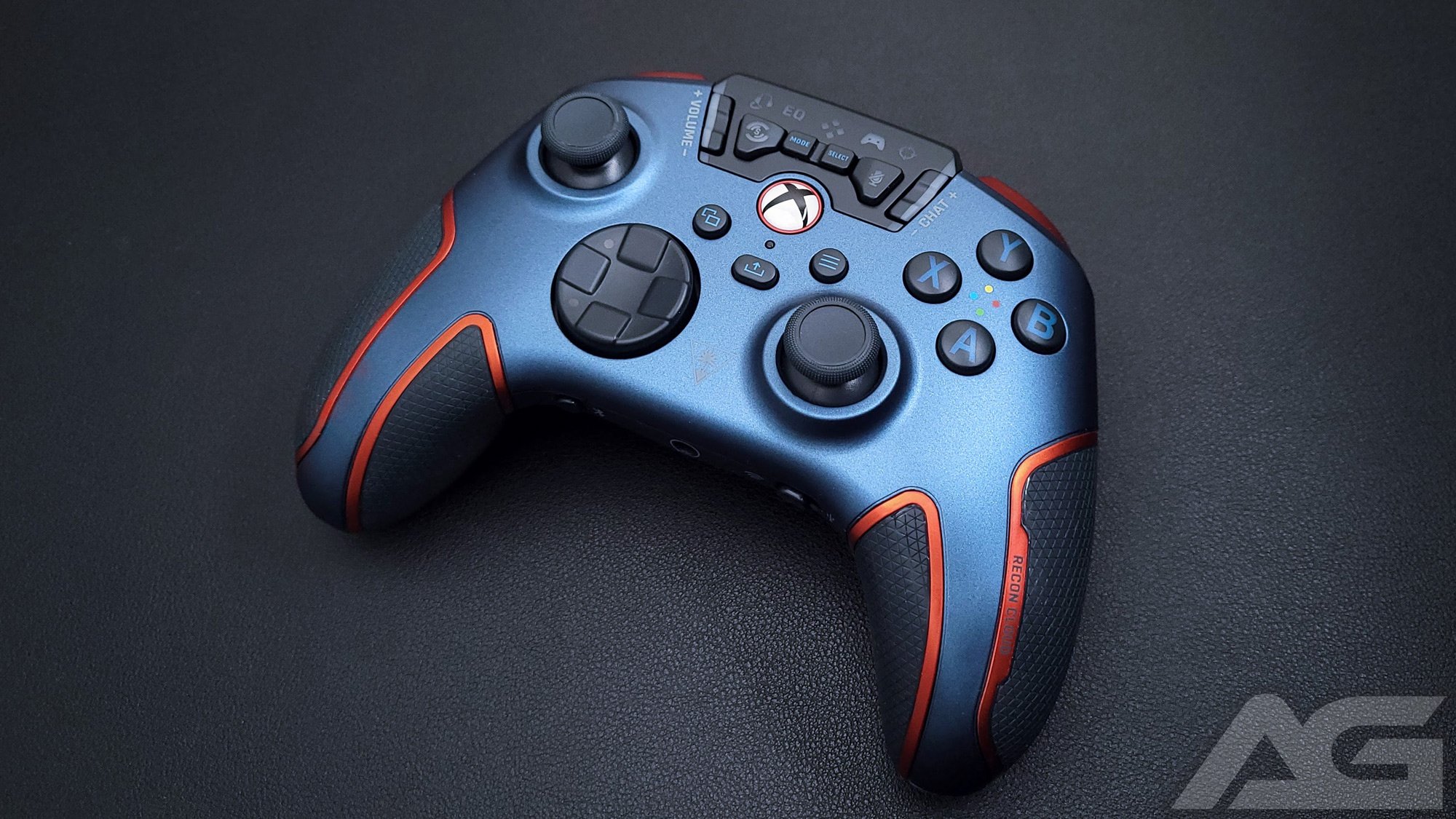 Zhiyun F100 with diffuser and reflector

That gave me a lot of freedom to play with different setups and I found the modifiers to be invaluable. The bare light of the F100 was a little harsh in my opinion. Although, it’s still useable–especially if you feather it to the side–but adding the included diffuser is ideal. It does a lot to soften up your shadows and give a broader more even light to the scene.

I also loved playing with the barn doors and the grid when using it as a second or third light in my setup. Additionally, the HSI mode makes it so much easier and fun to play with colors while lighting. It’s way more convenient than messing around with gels on your lights. 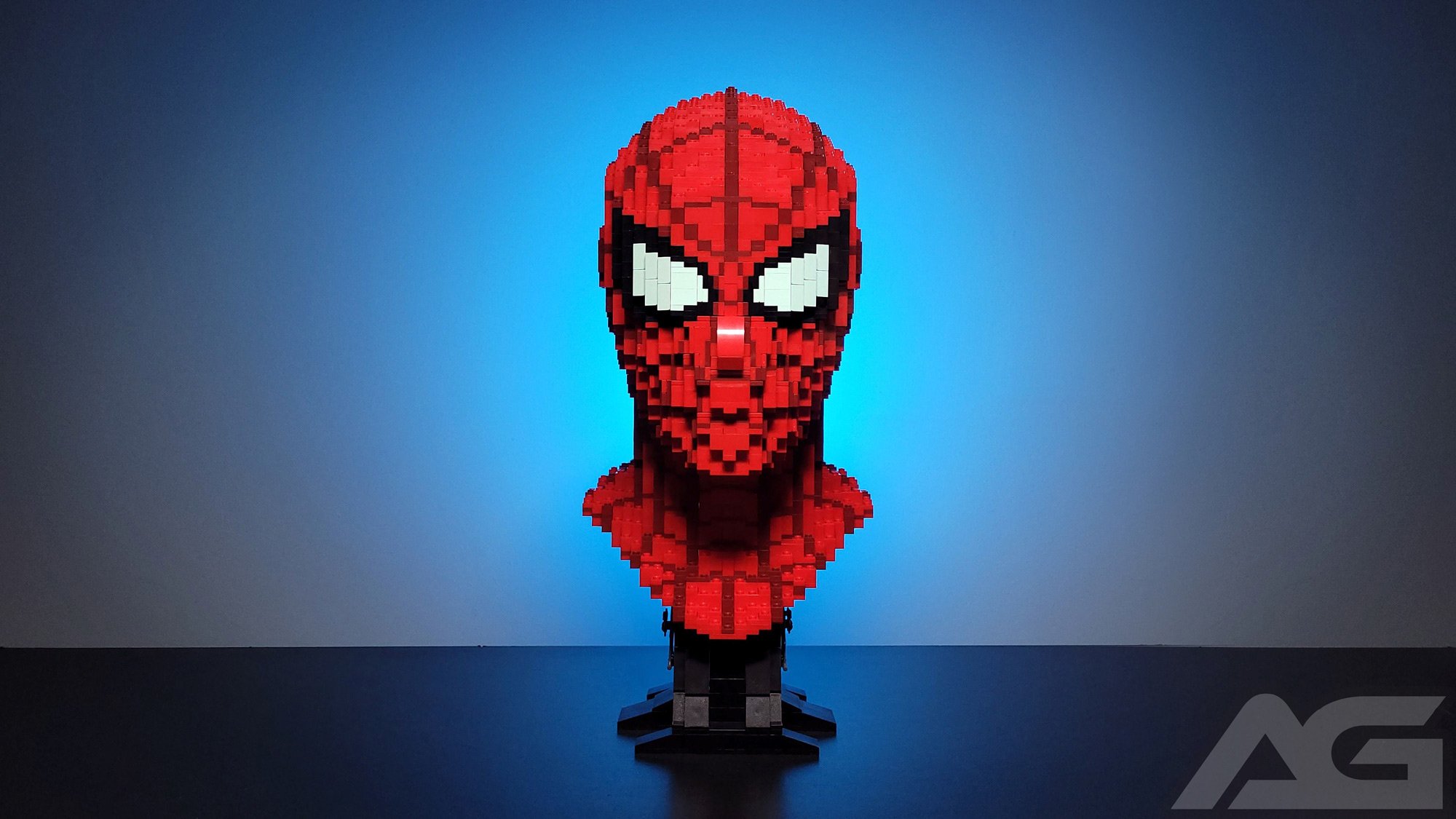 For example, I was able to use the Zhiyun light stick to add a pop of blue backlighting to the photo I’ve posted above of the Lego Spider-Man bust. It really adds a lot to the feel of the image, and that shot was lit entirely with Zhiyun light sticks. I also used my smartphone to take all the photos in these examples, to show that you don’t need a DSLR to take nice pictures as long as you have proper lighting. The fixed f/1.8 aperture also helped me keep the ISO low for these images. 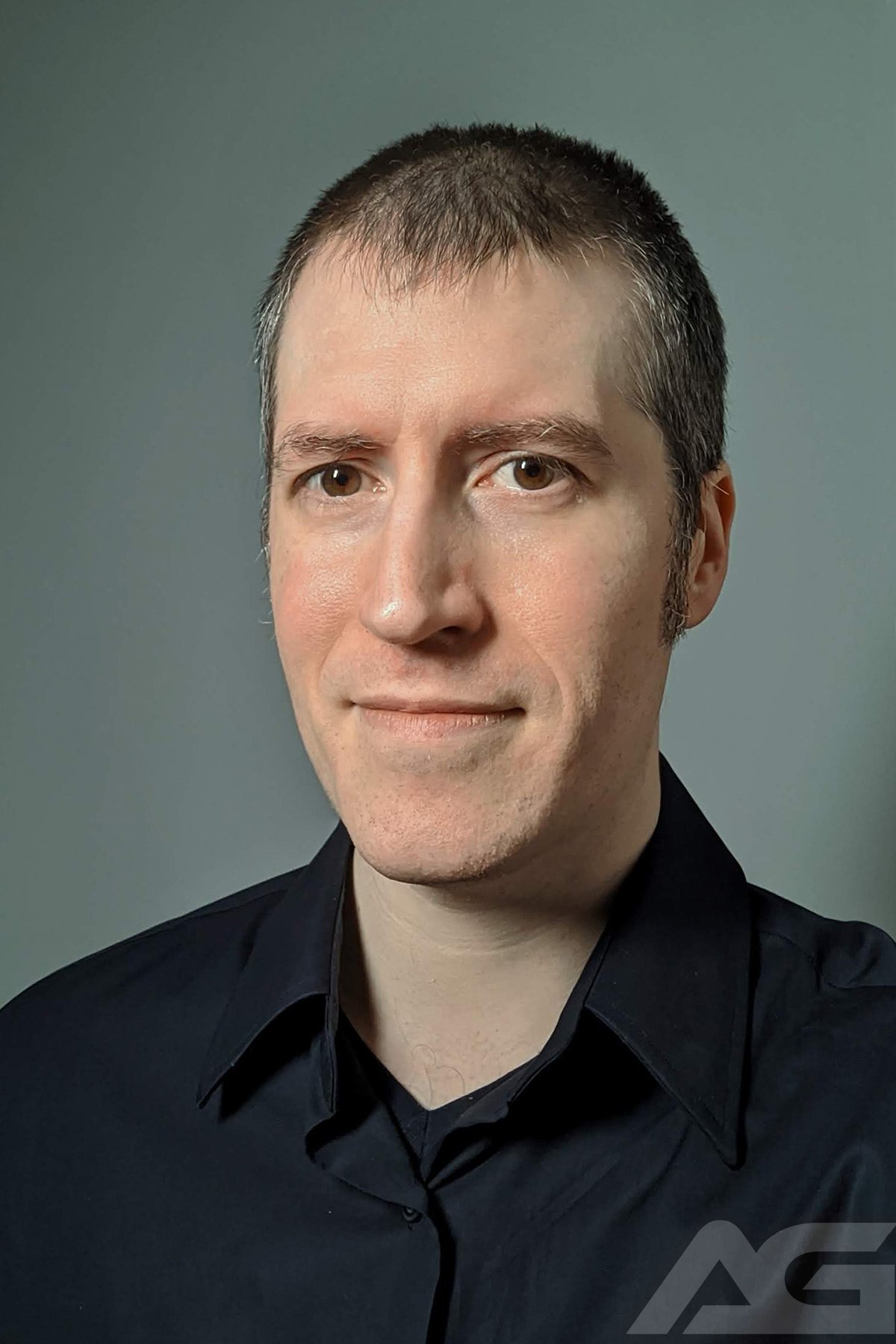 Zhiyun F100 used with a reflector

Special note to all of you videographers and streamers, the fans on the F100 run while using the light. It doesn’t seem to kick on that often unless you’re working at high intensities or you’ve had it on for a long period of time. Thankfully, in my experience, the fans were barely audible, even when running it at full brightness.

Speaking of videographers, the Zhiyun Fiveray F100 offers a variety of effects lighting for video. These include, SOS, Fire, TV, Flash, Faulty bulb, and Candle. I tested these out a bit and found that they all worked well and some can be essential for creating a mood while filming. However, I was disappointed that there was not a police light setting, as this is a commonly used effect while filming.

Additionally, it would have been ideal if there was a way to adjust the speed of the effect, because most of these are just strobing lights of one color or another. Having control over the timing of the flashing would really take this light stick to another level.

One of my biggest concerns with the Fiveray F100 was the battery life. Zhiyun rates it for only 30 minutes of continuous use at 100% brightness. That’s not a whole lot of time and when you’re trying to keep your ISO as low as possible, you’re usually going to want to shoot at 100% brightness.

To get around this, I found myself setting up shots at a lower brightness and then cranking it to 100% and adjusting settings for the final photo. There’s also a high-speed charger you can purchase from Zhiyun that allows you to run it at high outputs consistently without worrying about battery life. I didn’t have one of those to test, but it would be worth investing in if you do a lot of videography.

If you shoot a lot of still life, you can also use a tripod and longer exposure time to compensate and keep the brightness lower. That will allow you to shoot for hours, as the F100 is rated for a little over five and a half hours when set to 10W.

On the bright side, when it comes time to charge up, the Fiveray F100 supports 100W charging through the USB Type-C port and that makes topping it off much quicker. 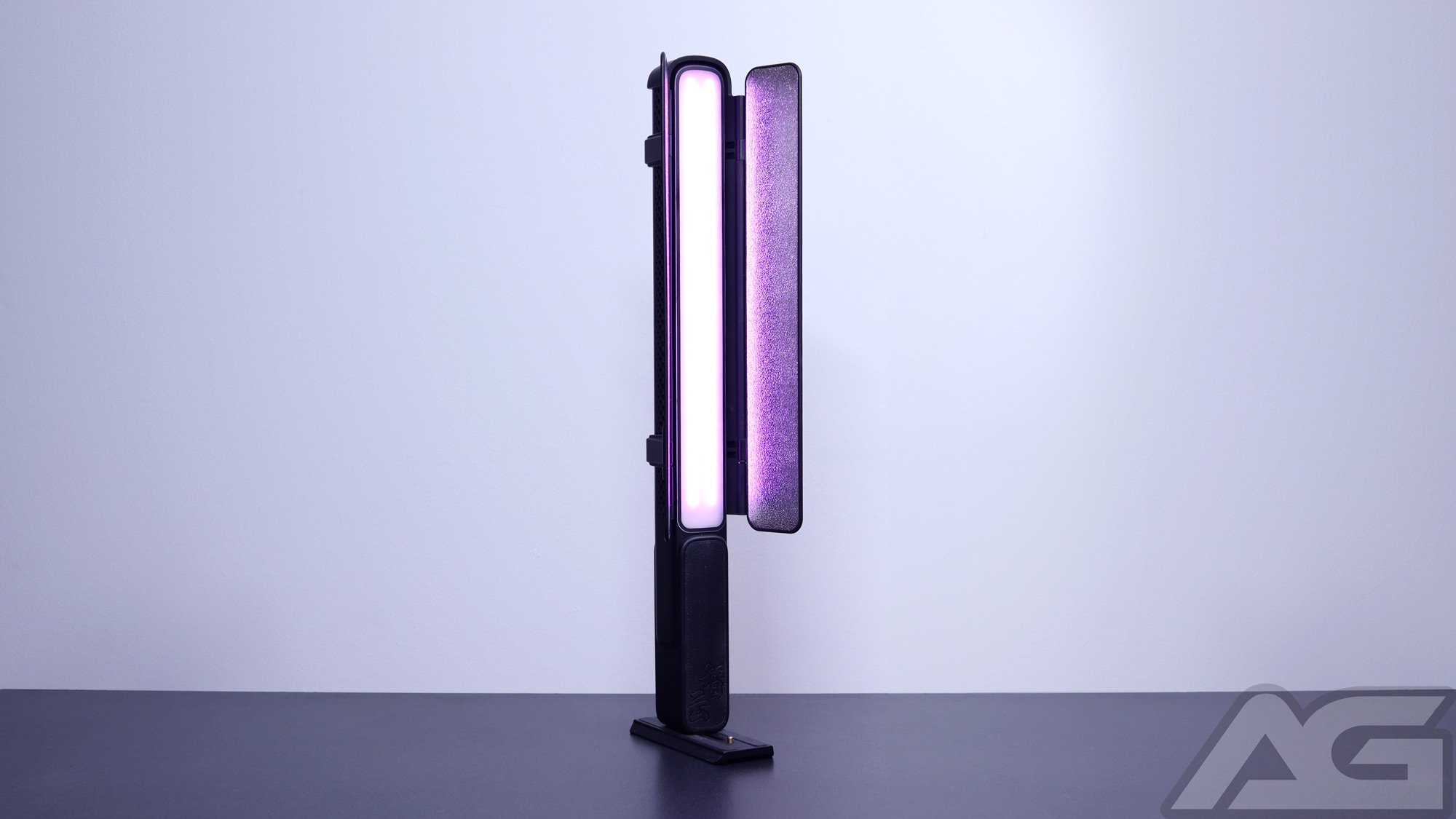 Over the past few weeks, I’ve really fallen in love with the Zhiyun Fiveray F100 light stick. It’s not perfect, but the F100 excels at being a compact versatile lighting tool with all of its various modes and modifiers. It only lacks a little in intensity and battery life, but more than makes up for those shortcomings by offering tons of controls and freedom when lighting up your scene.

My biggest problem now is that I want more of them. One F100 and a reflector can do a decent job lighting up a single subject, but with a few of them, you’d be able to tackle much larger projects.

Furthermore, I wish there was a bracket that allowed for the F100 to be mounted horizontally. I often preferred the look of the light when horizontal vs. vertical, but it puts a lot of strain on a light stand due to the weight. A tripod mount built into the barn door bracket would have been perfect.

The Zhiyun Fiveray F100 Light Stick is currently available in black or white from Amazon and Zhiyun’s website for $249.

Buy from Amazon Buy from Zhiyun