HomeNewsWhatsApp's New Accidental Delete Feature Lets You Undo 'Delete For Me' So...
News 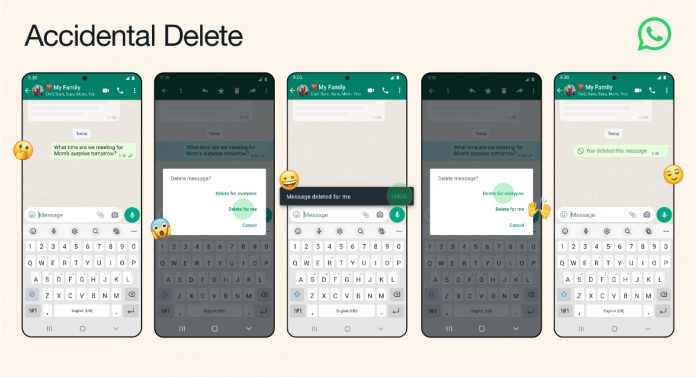 WhatsApp has rolled out a new group chat feature that lets you undo the “Delete for Me” action, to avoid potentially embarrassing scenarios where you accidentally delete a message only for yourself instead of removing it from the conversation for everyone.

Called “Accidental Delete,” the new feature adds a five-second window to let users reverse an unintentional Delete for Me action and completely delete it from the group chat.

Previously, if you accidentally tapped Delete for Me, there was no way to undo it, leaving the message inaccessible to you but freely viewable to everyone else. By introducing a small time window to roll back the action, Accidental Delete aims to help users avoid such situations.

WhatsApp says the new feature is available to all users on Android and iOS.

WhatsApp introduced the ability to delete and revoke messages up to seven minutes after they’ve been sent in October 2017. WhatsApp later extended the time window in which users can delete a message they already sent to a person or group to over an hour.Tag: WhatsApp
This article, “WhatsApp’s New Accidental Delete Feature Lets You Undo ‘Delete For Me’ So You Can ‘Delete For All’ Instead” first appeared on MacRumors.com