HomeNewsThis glass mechanical keyboard has an entire computer inside
News

This glass mechanical keyboard has an entire computer inside 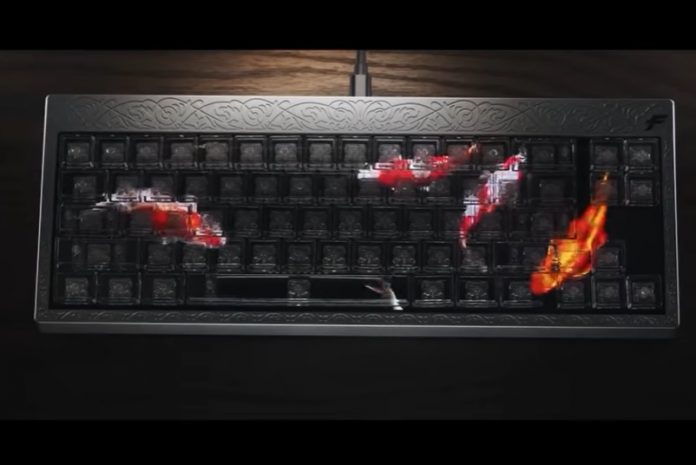 The PC accessory brand Finalmouse has announced a unique mechanical keyboard featuring detailed animated images that can display from under the transparent glass keycaps. That’s right — you read that correctly.

While many keyboards might include moving RGB LED lights as a fun design, the Finalmouse Centerpiece keyboard features “interactive skins” that are generated through Unreal Engine 5. the 3D computer graphics game engine.

There is a display at the bottom of the keyboard switches that projects the scenes of the skins so you can see them. One skin features koi fish swimming around, and if you press a key, they swim out of view. Others include ice cracking, the Eye of Sauron, a lion grazing, a galaxy, clouds, a spaceship blasting off, and cherry blossoms, among many others.

Finalmouse has yet to share specs details about the display, such as exact size, brightness, resolution, or refresh rate, according to Ars Technica.

The keyboard is also powered by its own CPU and GPU, so its system’s resources are separate from the devices to which it is connected, according to Finalmouse.

Artists are also expected to be able to submit skins on the company’s Steam app called The Freethinker Portal and even have the opportunity for monetization. Few details are known about the app other than it will be available for people to download designs and that the Centerpiece keyboard can store up to three designs and toggle between them through a dedicated switch on the side of the peripheral. Notably, you don’t have to leave the animations on all the time. The keyboard also includes a brightness knob on its side that doubles as an on/off switch.

The glass material used on the Finalmouse Centerpiece keyboard is the Laminated DisplayCircuit Glass Stack, which goes over an aluminum chassis. Despite its materials, Finalmouse said that users should have no issues with the durability of the keyboard.

The keyboard has also been described as having a unique typing sound comparable to “soft marble raindrops,” however, it has not yet been tested hands-on to confirm. In terms of other mechanical switch specs, the keyboard is based on Gateron’s linear Black Ink switches, which have 4 millimeters of travel and actuate with 60 grams of force, according to Finalmouse.

The brand said it has plans to release an analog version of the Finalmouse Centerpiece keyboard featuring Hall effect sensors.

The peripheral will be available early next year selling for $350.