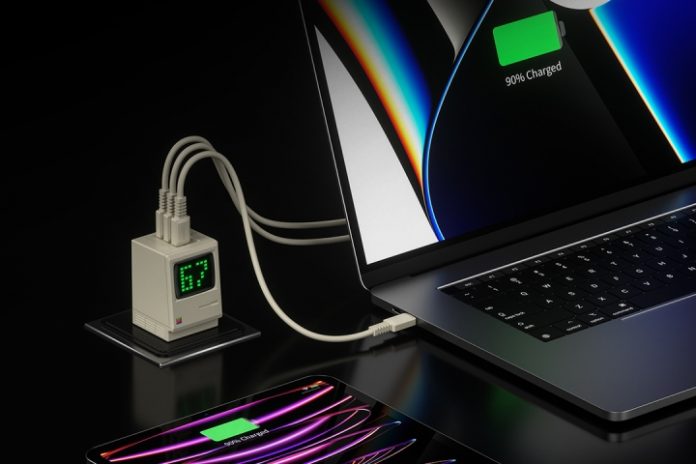 It’s no secret that Apple attracts legions of adoring fans, many of whom have a penchant for Apple devices of yesteryear. That kind of inspiration might be what led gadget firm Shargeek to launch a new power adapter heavily inspired by the old-school Macintosh 128K from 1984.

This computer is among Apple’s most iconic Macs, with its compact, boxy design being instantly recognizable to computer enthusiasts of a certain vintage. It seems Shargeek’s designers not only agree but feel it’s the perfect shape for the firm’s Retro 67W charger.

Shargeek claims its charger is the first 67W adapter to include a built-in power display. This shows the power output of the charger in real time, allowing you to ensure your devices are getting as much power as they require to quickly charge up.

Speaking of which, Shargeek says the Retro 67 can charge an M2 MacBook Air from dead to full in two hours and takes 30 minutes to power up an iPhone (although the company hasn’t said which iPhone model it’s talking about).

On the back are three USB-C ports, each of which can provide 67W of power individually. When two ports are in use, you’ll either get 15W of power or 20W and 45W to those ports, depending on which ones are used. However, it’s not clear if that 15W goes to each occupied port or is shared between two ports. When all three ports are occupied, the top two provide 15W (again, whether individually or combined is unclear), with the bottom port outputting 45W of power.

The Retro 67 can also be outfitted with a variety of travel adapters, which can be bought separately. There are versions for U.K., Australian, and EU plugs, which could be handy for foreign excursions. While we can’t say whether it’s one of the best MacBook Pro accessories yet, it might be worth a look if you travel a lot.

We have to admit, it feels strangely fitting to juice up your modern devices with a charger shaped like an old-school classic. Yet while the Macintosh 128K is clearly an inspiration, the Retro 67 also confusingly draws on The Matrix, a film released 15 years after Apple’s first Mac made its initial impact. That’s seen in the neon green falling numbers that rain down on the Retro 67’s display. While it’s a cool effect, perhaps Shargeek would have been better off sticking with one theme for its charger.

The Shargeek Retro 67 power adapter has been crowdfunding on Indiegogo, where it has hit its (comically low) target of $20,000 HKD, which is about $2,575 USD. The company says it aims to begin shipping the charger in March 2023.