The ROG Zephyrus G14 infuriates me, but it’s still my favorite gaming laptop of 2022 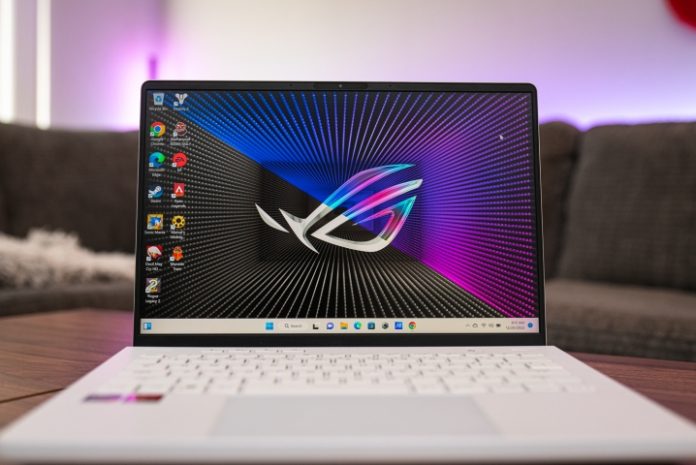 Gaming laptops are antithetical to how I play games, and despite my best efforts, I’ve never had great luck with them. That’s why I sold my 2019 Razer Blade 15 to buy a Steam Deck early in the year.

But after a few months without a dedicated machine for traveling and working on-the-go, I took the plunge again with the 2022 Asus ROG Zephyrus G14, and it completely changed my relationship with gaming laptops. Despite the roller coaster of problems, and even cycling through a few different units, I still use the G14 every day.

For the first few weeks, the G14 was the perfect laptop — powerful, comfortable, and above all else, portable. The Zephyrus G14 systematically dismantled my problems with gaming laptops within the first few weeks of owning it. Of all places, it started with disk space. I’ve grown accustomed to carrying a 2TB Samsung T7 around with me at all times, mainly because I’d rather save the money on a laptop and go with less disk space in the machine. Plus an SSD swap is an easy upgrade.

But 1TB is standard on the 2022 G14, even on the cheapest model, so I was the proverbial kid in a a candy store as I started loading up the machine with my Steam library. The free month of Xbox Game Pass certainly helped — I’ve been a subscriber since the program launched, but the inclusion made the G14 an easy recommend for folks just dipping their toe into PC gaming.

I’ve never worried too much about gaming laptop performance, assuming I can at least run games at medium settings above 60 frames per second (fps). The G14 hits that with room to spare. My initial impressions were swayed more by heat and fan noise. I’d grown accustomed to laptops like the Razer Blade 15 and Lenovo Legion 5 Pro that ramp up the fans the moment they need to render any geometry and spit out heat until the surface is hot to the touch. The G14 gets loud and hot, but the clever hinge design that kicks the laptop up at an angle helps it exhaust heat quieter and quicker than a machine its size should.

The hybrid graphics setup worked perfectly, too. Poor battery life led me to keep every gaming laptop I’ve owned chained to the charger at all times, but automatically switching to the integrated graphics encouraged me to the take the G14 into my kitchen to look up recipes while I was cooking, carry it around the house to quickly jump on the internet, and bring it out for the day to get some work done.

For most gaming laptops, the critical failure point is the keyboard, but I’ve typed scripts, articles, messages, and everything in-between on the G14. I still love the feel of the keyboard, and that’s coming from a guy who builds his own mechanical keyboards as a hobby.

Those first few weeks with the Zephyrus G14 turned me from a gaming laptop skeptic into an evangelist. I was enthralled. But then the problems started to set in.

Eight days. I was eight days outside of Best Buy’s return window when my Zephyrus G14 refused to boot one morning. I left it dormant over a busy weekend, and although I’d anticipated the battery dying out and the long boot time the machine normally had, I couldn’t get it to work. I was a two weeks away from leaving on a work trip — the reason I spent $1,700 on the Zephyrus G14 in the first place — and out of options. I didn’t have time for an RMA, and I felt like I was sold a lemon.

I called Best Buy, maybe they would would generously exchange the laptop. They pointed me to Asus. I called Asus. They pointed me back to Best Buy because I had registered the laptop a week late, so I was under Best Buy’s exchange window in the eyes of Asus. In-store Best Buy visit? No dice, they told me to call Asus. Eventually, a very helpful Asus rep created a return merchandise authorization (RMA) before I was officially under support, but a week had already gone by; I needed the machine fixed in a matter of days.

I had owned the machine for less than a month, and I treat my tech like royalty. This was a quality control issue.

I decided to take a look myself, and after a few hours of troubleshooting, I got the machine to boot. I vigorously researched and came across the cursed Zephyrus G14 313 BIOS update. I had to search forums and Reddit, as Asus pulled the BIOS version shortly after it released and I couldn’t find any support documentation on it. The G14 forced a BIOS update on me shortly before the machine refused to boot, so I assumed that was my problem.

That update likely fixed other issues — issues with crashing when switching graphics modes, poor power management, etc. — but that wasn’t why mine wouldn’t boot. After applying the update, I was only able to get the machine to turn on by taking the bottom off, disconnecting and reconnecting the battery, and using the charging cable to force a boot. Defeated, I sent it in for a repair. The problem? A dirty connector on the power switch. Mind you, I had owned the machine for less than a month and I treat my tech like royalty. This was a quality control issue.

I have my laptop back now, and it works, but it still has issues. Just a few days before writing this article, it was caught in a loop of continually pressing the 1 key, even after I cleaned the key. I had to reboot three times for the problem to go away. My brother, who I enthusiastically recommended the laptop to shortly after buying it, has run into multiple issues as well. The graphics drivers available through the MyAsus app failed to update, sending him into a cycle of uninstalling and reinstalling the driver over the course of a week to get the machine into a usable state.

I’ve encountered numerous other bugs as well. Sometimes it’ll randomly hang on the Windows login screen completely frozen until I do a hard reboot. When cold booting, it’ll occasionally take the G14 upwards of three minutes before I see a splash screen, sending a chill down my spine due to the fear that it’ll stop working like it did before.

Maybe I shouldn’t be, but I’m still using the Zephyrus G14. There’s been an influx of 14-inch gaming laptops over the past year, and I was tempted to sell off my G14 and go with a Razer Blade 14 or Alienware x14 instead. But I’m hanging on to the G14 for now.

Despite my multiple of issues, all of the positives I picked up on after buying the laptop remain — the keyboard is great, it’s super portable, and I have plenty of disk space. Above all else, though, the G14 was cheap. Sure, $1,700 is a lot to spend on a laptop, but it looks like a downright deal stacked up against the Razer Blade 14 at $2,600 and the Alienware x14 with a lesser configuration at $1,900. That’s even more true now, when you can find the 2022 Zephyrus G14 below $1,200 on a sale, while Razer’s and Alienware’s machine sell for north of $1,500 with a generous discount.

The Zephyrus G14 is my favorite piece of tech I bought in 2022. I had some big problems with it, but Asus was quick to respond to support (just as a customer, not as a writer), and I had my machine back within 10 days of sending it out for repair. And although I’ve encountered bugs since, I’ve been able to solve them with a few reboots.

It’s hard recommended the Zephyrus G14 to everyone. You might have to deal with some inexplicable bugs or quality control issues — I’ve had to, at least on the three units I’ve used at this point. Still, it feels like the complete package. Portable, powerful, comfortable, and at a price below $2,000? No one else is touching the Zephyrus G14 right now.