HomeNewsThe next Mac Pro may be a huge disappointment, leak suggests
News

The next Mac Pro may be a huge disappointment, leak suggests 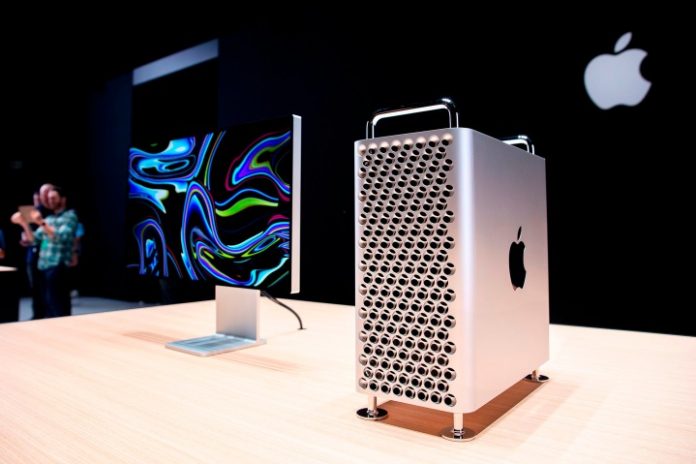 Apple might have canceled the M2 Extreme chip that was due to go into its now-delayed Mac Pro computer, instead leaving customers to make do with a less performant configuration when the next Mac Pro launches in 2023. That’s according to Bloomberg reporter Mark Gurman — and it’s not the only bad news he recently shared in his Power On newsletter.

Gurman says that until recently, Apple’s plan was to launch two versions of the upcoming Apple silicon Mac Pro: one with an M2 Ultra chip (an upgrade of the M1 Ultra found in the Mac Studio), and one with a chip Gurman dubs the M2 Extreme, which would have consisted of two M2 Ultras fused together.

The resulting chip would have boasted 48 CPU cores and 152 graphics cores — double the 24 CPU cores and 76 graphics cores expected to be found in the M2 Ultra. As well as that, the M2 Ultra is rumored to “top out” with “at least 192GB of memory,” according to Gurman. It’s unclear if that means 192GB is the maximum memory or the starting point, but either way, it’s far less than the 1.5TB the current Mac Pro can be equipped with. Even considering Apple silicon’s unified memory that the Intel models lack, that’s still a large performance dip.

That lesser performance will be disappointing to high-end users who have been waiting for a new Mac Pro for over two years since the start of Apple’s transition to its own chips. For these users, an M2 Ultra might not cut it — after all, if they were interested in this tier of performance, they could have just bought a Mac Studio.

Gurman notes that the Apple silicon Mac Pro will retain some of the current model’s selling points, including “easy expandability for additional memory, storage and other components.” Still, since Apple silicon chips use integrated graphics, it’s unlikely the new Mac Pro will come with any discrete GPUs, which raises questions over whether it will be able to match the graphics performance of the Intel model.

What prompted this decision?

Gurman claims this apparent reduction in the Mac Pro’s ambition was prompted by a number of factors. For one thing, the M2 Extreme chip was allegedly becoming prohibitively expensive. The M1 Ultra version of the Mac Studio costs $5,000, and Gurman believes an M2 Extreme Mac Pro would cost at least $10,000 — and that’s without any upgrades.

Such a price would be too much for many customers to swallow, making the Mac Pro an “extraordinarily niche product” that wouldn’t be worth the development, engineering, and production costs.

As well as that, making the M2 Extreme by fusing two M2 Ultra chips together has apparently posed a significant engineering challenge to Apple, and the company has seemingly decided to throw in the towel. Considering how niche the Mac Pro is, abandoning the M2 Extreme would free up manufacturing resources for higher-volume products, Gurman says.

A lot more in the works

There’s more bad news. We’ve heard rumors for a long time that Apple is working on a new iMac Pro to replace the model it discontinued in 2021. While Gurman believes Apple is still actively developing that device, he says it has been delayed “for similar reasons as the Mac Pro.” That might hint that the future iMac Pro will be equipped with an M2 Ultra chip, but not the now-canned M2 Extreme.

Elsewhere, a new Mac mini is still in the works and will come with M2 and M2 Pro chips. The latter should allow Apple to finally phase out the Intel Mac mini and offer its own high-end Apple silicon alternative — something that has been a problem for too long now.

According to Gurman, new 14-inch and 16-inch MacBook Pro models with M2 Pro and M2 Max chips are “arriving early next year.” And there are updates to the Pro Display XDR and Studio Display monitors coming too, although the former might launch after the Mac Pro, as its development is behind that of Apple’s top-end computer. Both displays are expected to contain Apple silicon chips to help offload some of the work from the Macs they are connected to.

While that means Apple has plenty of updates on the go for its Mac line, the Mac Pro’s pivot away from the M2 Extreme will undoubtedly be disappointing to the demanding users it is targeted at. Questions had already been raised as to whether the M2 Extreme could exceed (or even match) the performance and configuration options of the Intel Mac Pro. Now that this chip has been abandoned, those questions are only going to get louder.