Ryzen 7000 CPUs have a serious problem with their heat spreaders 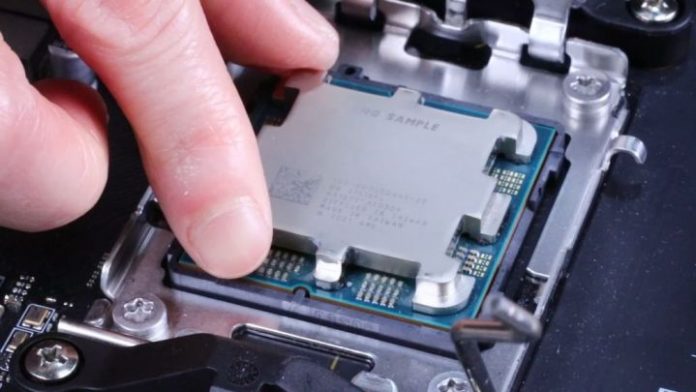 AMD’s new Zen 4 Ryzen 7000 CPUs look undeniably cool with their spider-leg-like integrated heat spreader (IHS). But in my time with these chips, I’ve come to absolutely hate their design.

The convoluted, atypical shape means that cleaning off all the heat paste when changing CPUs or coolers is almost impossible. But that’s only the beginning of this component’s problems, which even include scratching and damaging nearby components. That’s just not cool.

Let’s start with the obvious issue I mentioned up top. The problem seems to stem from the unique design of AMD’s Ryzen 7000 heat spreader, the integrated one on the CPU itself.

It’s uniquely shaped to provide direct-air access to some of the sensitive components around the CPU, with a thicker IHS in the center to help offset the difference in height between the traditional AMD PGA AM4 socket and the new LGA design of AM5 socket used with Ryzen 7000. This ensures cooler compatibility between generations, a very welcome feature for a generation that already demands a new motherboard and RAM.

But the problem with this shape is that it is very easy to end up with thermal paste getting stuck in the grooves, and their thin shape makes it hard to remove. This doesn’t necessarily matter with most heat pastes, as they’re thermally not electrically, conductive. But if you’re using liquid metal or another conductive thermal interface material, then this could be a real problem.

It’s also not very aesthetically pleasing to have old thermal paste gunking up your chips and, on a small scale, that paste could act like insulation along the side of the CPU, worsening its thermal transfer properties.

We’re not the first ones to encounter the problem of overflowing heat paste getting stuck in between the segments of the IHS. It’s so prevalent and was so obvious early on, that Noctua made the  Noctua NA-TPG1, a thermal paste guard and cleaning set. Maybe we should have bought one of those for our test systems from the get-go.

Perhaps more problematic  is the fact that the Ryzen 7000 CPUs have scratched up two different AIO coolers we’ve been using for testing — on two entirely different test rigs used by two different writers on two different continents. And I want it to be quite clear that this isn’t just user error.

Digital Trends reviewer Jacob Roach and I have both had the same issue with repeat Ryzen 7000 testing leading to some quite nasty scratches and uncleanable blemishes on our respective AIO coolers from the polished copper cold plates.

One of these coolers hasn’t been tested with anything but Ryzen 7000, while the other survived multiple generations of CPU testing completely unscathed until the testing of Ryzen 7000 began to wear it down.

We haven’t nailed down exactly what the problem is here, but it would seem likely that slightly uneven load across the cold plate from the unique IHS shape causing indentation around the edges, which over time is leading to damage of the cold plate.

That would suggest that as long as we continue to use it with Ryzen 7000 CPUs, we won’t see much degradation in cooling potential since it will still line up, but if we change out to an Intel CPU, or an AM4 chip, what then?

Who needs an IHS anyway?

The added thickness of the Ryzen 7000 IHS has been blamed for the high temperatures of the chips, with most hitting 95 degrees on the core mere seconds after loading them with anything strenuous. Indeed, overclockers around the world have been having amazing success in delidding, or grinding down the IHS to make it thinner, with some reporting temperature drops of as much as 20 degrees.

Curiously, this doesn’t seem to have a huge impact on performance, but it does ward off the problems of heat paste spread and cold plate scratching. It just comes at the expense of potentially destroying your processor during the delidding process, and needing to be extremely careful with how tightly you mount your cooler.

Despite Ryzen 7000 CPUs being available in the wild for a couple of months now, this isn’t an issue I’ve seen repeated elsewhere. I’m glad in some ways that my colleague experienced the same problems, as at least I can rest assured that I’ve not just been handling my new AMD CPUs too vigorously, or simply overtightening the screws.

But two corroborative data points is more of a coincidence than a pattern, so more research into this phenomenon is required if we’re too get to the bottom of the issue. I’d be interested to see whether nickel-plated copper would fare better, with its anticorrosive properties aiding in resisting the damaging effects of the Ryzen 7000 IHS.

Perhaps there’s a mounting process where you can get away with not tightening the screws all the way to reduce that edge pressure from the IHS while still maintaining cooling performance.

If any of you have come across this phenomenon yourself, though, do let us know. We’ve love to know we’re not alone here.