HomeNewsOverclockers surpassed the elusive 9GHz clock speed. Here’s how they did it
News

Overclockers surpassed the elusive 9GHz clock speed. Here’s how they did it 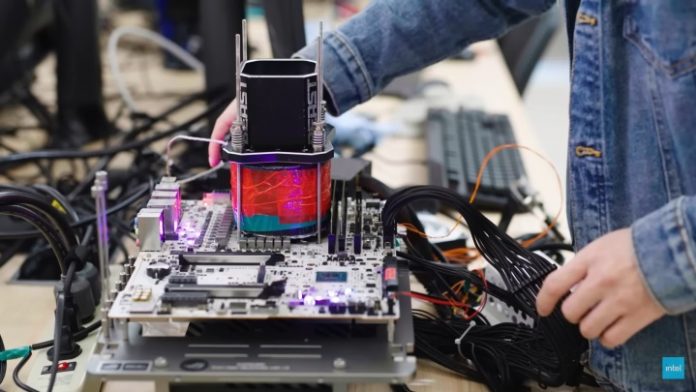 Asus has just announced that its team managed to break yet another world record, this time by overclocking the Intel Core i9-13900K to an extreme level.

The CPU was able to hit a whopping 9.009GHz, surpassing the previous 8.8GHz record. Intel shared a video that describes the whole process, which involved some quite innovative solutions.

Intel’s recent Raptor Lake CPU, the Core i9-13900K, is undoubtedly one of the best processors out right now. Most of us will use it for gaming, work, and anything in-between — but when such a beast falls into the hands of extreme overclocking enthusiasts, the results can be incredible. The CPU was paired with an Asus ROG Maximus Z790 motherboard, and to get to that 9GHz milestone, the team had to improvise and get creative.

First, the overclockers turned off all of the efficiency cores (E-cores) and disabled hyperthreading. This means that the CPU was running only eight performance (P) cores and eight threads. Overclocking at this level is often done with the help of liquid nitrogen, but that wasn’t enough to break past the 9GHz limit.  The team resorted to using a mix of liquid nitrogen (LN2) and liquid helium.

Liquid helium can be tricky, as it runs at around -269 degrees Celsius. That was necessary to keep the Core i9-13900K stable, and in the video shared by Intel, SkatterBencher remarks that the chip handled the pressure well. The team ran into other problems, though, such as the USB ports freezing and the motherboard running too cold. In the end, they had to cool the CPU while warming up the motherboard to hit the 9.009GHz record. The processor was able to run PiFast at that frequency for 6.85 seconds and SuperPi 32M for a total of 3 minutes and 3 seconds.

The 9GHz CPU frequency barrier has been elusive up until now. Many professional overclockers have tried to reach 9GHz, but so far, only Asus’ team seems to have achieved that milestone. Hitting extremely high clock speeds is not a first for the Core i9-13900K, though.

The CPU has also recently hit 8.8GHz, setting a new world record, but as we now know, the victory was short-lived. Fun fact: the recent Core i9-13900K win belongs to Elmor, who was also involved in today’s 9GHz success. Prior to that, the title of the highest CPU frequency belonged to the less-than-impressive AMD FX-8370 with a clock speed of 8.722GHz. While that lineup of processors had nothing on AMD’s Ryzen tech that came later, it seems to respond particularly well to liquid nitrogen and overclocking in general.

It’s impressive how long it took for AMD to lose the No. 1 spot for the highest clock speed. The 8.722GHz record was set all the way back in 2014, and up until October of this year, AMD reigned supreme. Finally, Raptor Lake swooped in and broke the record, and now with Asus’ efforts, both first and second place belong to the Intel Core i9-13900K.