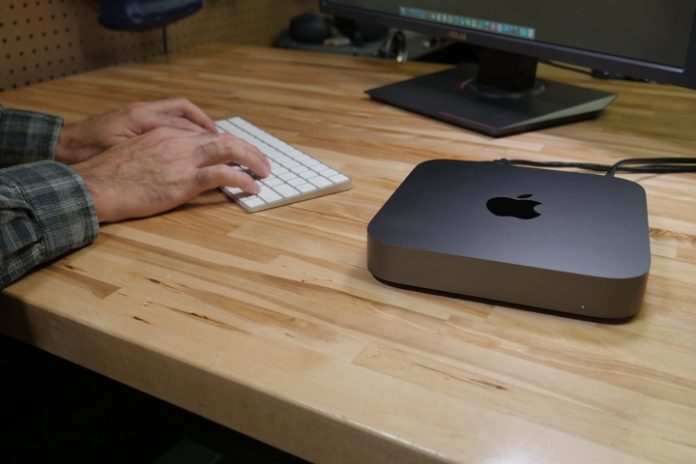 As a desktop machine, my M1 Mac mini is absolutely great. It’s small enough to pop into a backpack, but capable enough to handle my workloads with ease. Yet there’s one problem nagging at me that makes me worried for the future of the Mac mini line — and it likely won’t be fixed any time soon.

That’s because, while the Mac mini is ideal for most of my work, there are times when I wish it had a bit more power. That doesn’t come up often — it’s mainly when I’m playing and reviewing Mac games. I’ll often have to turn the settings down lower than I’d like, which is perhaps unsurprising given that the M1’s integrated graphics were part of Apple’s first stab at its own desktop chip.

Yet if I wanted to upgrade to a more powerful model, my options would be severely limited.

Take a look at Apple’s Mac mini page, and you’ll notice something jarring — the company is still selling an Intel-powered Mac mini. Yes, two years after the transition to Apple silicon began, you can still buy a Mac containing exactly the type of chip that Apple was meant to have left behind in an unceremonious and unemotional divorce. That’s decidedly weird, yet you get that same feeling elsewhere in the Mac lineup.

Worse, that Intel Mac mini is a terrible option. Apple began its Apple silicon evolution in 2020, but the Intel chip inside the Mac mini is an 8th-generation model released in late 2018. It’s so hopelessly outdated that Intel itself has discontinued it, yet here’s Apple, chugging along on something so inefficient and underpowered that it should be consigned to the trash heap of history, not puttering around inside your Mac mini.

And we’re not done there. Take a moment to consider that Apple is pitching this Mac mini and its four-year-old chip as the “high-end” option, the one to go for if you need a powerful computer that can render your 8K video footage without so much as a stutter. That makes Apple seem frankly delusional.

It also sends the message that if you need this kind of performance in a Mac mini, Apple’s chips aren’t ready provide it and that you should instead stick with (shudder) Intel.

Yes, we know Apple is more than capable of producing beastly chips — just look at the M1 Ultra in the Mac Studio — but that kind of firepower is still conspicuously absent from the Mac mini, two years after its release.

Chances are we’ll have a while longer to wait. We know the M2 Pro chip is on the way to the Mac mini, but Apple can’t release an M2 Pro Mac mini before that chip debuts in the MacBook Pro. MacBook Pro laptops are some of Apple’s flagship devices, whereas the Mac mini is much more niche. Protocol dictates that the MacBook Pro must come first.

Unfortunately, the next high-end MacBook Pros aren’t expected to launch until well into 2023, with the spring the most likely date. That could mean another four or five months of waiting for a high-end Mac mini.

None of this is ideal. I get that the Mac mini is not exactly top of Apple’s priority list, but the fact that there’s still no more powerful option than the M1 (no, the ancient Intel option doesn’t count) is troubling. Let’s hope I’m wrong and we get a new Mac mini before the year is out. Just don’t count on it.