HomeNewsI’m ready for a folding iPhone — but only if it has these...
News 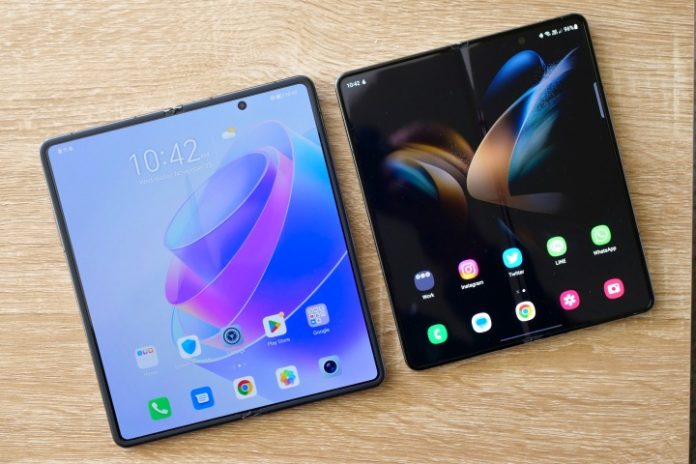 In 2019, Samsung unveiled the first folding smartphone, the Samsung Galaxy Fold. It had plenty of issues, but it still marked an important first step in the industry and began the trend of folding phones. Samsung continues to lead the market, but other manufacturers have also dipped their toes into the world of foldables. There’s Oppo with the Find N series, the new Honor Magic V, and Google is a possible contender with the rumored Google Pixel Fold.

One of the leading smartphone manufacturers that is absent from the foldable train, though, is Apple. There have been rumors that Apple has been working on a foldable “iPhone Flip” for several years now, but all of that has been rumors and speculation — which may continue for many more years until Apple finally makes one or cans the entire idea. Regardless of whether Apple goes through with it or not, I think it would be an interesting device to see at some point. Here’s what I hope to see in a foldable iPhone — that is, if Apple ever actually makes it.

One of the biggest problems with foldable phones, in general, is that because you’re folding the display, there’s a visible crease in the screen at the folding point. Not only is the crease visible, but you tend to feel it as well as you use the device. For some, this is already a big setback to prevent them from enjoying the benefits of a folding phone.

Apple is usually late to the game in a lot of things compared to the competition, but that’s because Apple likes to get things right whenever it can, rather than be the first on the market. I hope that if Apple does indeed make a folding iPhone, it would at least fix the crease problem as best as it can. Maybe by this time, folding display tech is improved from what we currently have. Or Apple could go the route of having two separate displays connected via a hinge, rather than a single display, which could be plausible.

When people think of a folding iPhone, I think the majority imagine a vertical fold, like the Samsung Galaxy Z Fold 4 currently on the market. When unfolded, the iPhone Fold would be more like a mini tablet, akin to an iPad mini in size, and the outer display would be like a regular iPhone in terms of functionality.

But there’s a problem with that; it’s hard for women like myself to fit a phone that bulky into our pockets because pockets on women’s clothing continue to be a travesty. I would prefer if Apple made a foldable iPhone that is more similar to the Samsung Galaxy Z Flip 4 because that offers a much more compact size that may be easier to fit in the pockets of women’s jeans and pants. One of the reasons why I was so intrigued by the Z Flip series is the fact that it folds down nicely into a small phone but expands into a full-size phone when you need to use it.

I would also love to see how Apple would handle an external display on a folding flip phone. Right now, I have a Galaxy Z Flip 4, and I like the external display for its simplicity — I can check the time, battery level, and my notifications.

It is also customizable to some degree, though, of course, a bit limited given the size constraint. I think if Apple went with a vertically oriented external display, similar to the upcoming Oppo Find N2 Flip, there could be more possibilities available. Plus, it would be more similar to the original iPhone orientation, and kind of like an Apple Watch screen. But you know, on a phone.

A blend of iOS and iPadOS

While I would personally like a foldable iPhone that is more akin to the flip variety, that may be unlikely. Instead, I think it’s much more likely the first folding iPhone take the miniature tablet approach. If that’s the case, then Apple may need to consider merging together iOS and iPadOS into a single experience.

Since the main point of folding phones like the Galaxy Z Fold is to help you remain productive on the go, Apple would need to modify the software to accommodate this. There would need to be at least some better way to multitask than what iOS currently offers (which is really nothing), but maybe not as complicated or cumbersome as Stage Manager. I think a good start would be a split-screen or split-view functionality, allowing one to have two apps on the screen at once, which is a functionality that a lot of Android phones already support.

That’s just a start, and obviously a very important first step for any foldable phone. It’s hard to say what else Apple should include on the software side for a folding device that it may or may not even make, but it’s clear that Apple would need to rethink how iOS and iPadOS work for such a device.

Hypothetically speaking, if Apple were making a foldable iPhone that would open up to be a mini tablet size, it would only make sense for there to be support for a stylus of some kind. This would be a good way for Apple to finally make the mini Apple Pencil that some people thought would become a reality with the sixth-generation iPad mini.

After all, if someone were to buy an iPhone Fold, they would probably do so because it can expand into a larger size for things like digital art, note-taking, diagramming, and more. For tasks like this, a stylus is much better to use than your fingers or even those fat capacitive styli that work universally.

Regardless, I think a stylus of some kind is a necessity if an iPhone Fold becomes reality. Otherwise, what would the point be?

Right now, the foldable market is pretty niche, and one of the big reasons for that is because of the price tag of current foldables. The Galaxy Z Fold 4 starts at $1,800, which is astonishingly high for most people. The Galaxy Z Flip 4 starts at a more reasonable $1,000, which is exactly the same starting price as an iPhone 14 Pro.

I really haven’t seen a lot of foldable devices out in the wild, even at places with a ton of people like Disneyland. The price point of entry for the market is high, which prevents a lot of people from even considering one, which is understandable.

But it’s important to remember that Apple has set the standard in terms of pricing — when Apple set the price for the iPhone X to $1,000, it began a trend, and everyone else followed suit with their flagship models. If Apple could make a foldable iPhone and have it set at a price that’s a little less than the current Galaxy Fold 4, well, it may take off. Or Apple could just set it even higher, and it would still sell like hotcakes! Honestly, it could go either way on this front.

However, for foldables to really take off with most people, the price point needs to be a tad lower than what they currently are. Apple could be the one to do that, or at least make it appealing for the average person.

It’s time for Apple to fold

Foldables are still very much in the infancy stages, and though they’ve improved since the first Samsung Galaxy Fold in 2019, they still aren’t without their own set of flaws. But Apple usually gets things right before they make any announcement (AirPower is one of those rare exceptions). So if the company has been working on a foldable iPhone, as the rumors say, we shouldn’t expect to hear about it until it’s ready, which may be 2025 at the very earliest.

At first, I was skeptical about foldable devices, but after dipping my toes in the world of Android, I’ve become more open to other platforms and even other mobile form factors (the same old slab of metal and glass is getting boring.) I’d be very curious to see what Apple does if it makes an iPhone Fold, and I think foldables could take off better if Apple came into the picture. After all, look at what the Apple Watch did with wearables, just like the iPhone did with smartphones.