HomeNewsWhy I bought one of AMD’s worst GPUs
News

Why I bought one of AMD’s worst GPUs 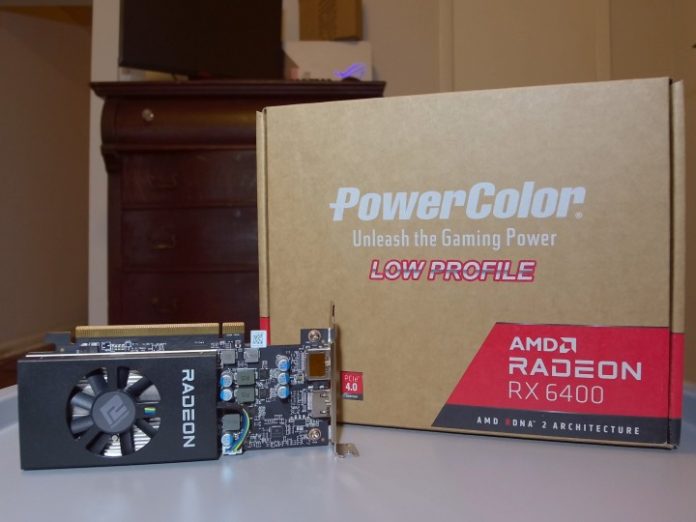 When it comes to graphics cards, AMD has had some stinkers over the years, and the Radeon RX 6400 has to be counted among them. For $130, it’s a terrible deal for most gamers, and the practical requirement of a recent CPU and motherboard is frustrating.

That is, for most gamers. Despite what I knew to be true about the RX 6400, I actually went out recently and bought one. No, I didn’t have a mental breakdown or some kind of psychotic episode. In fact, I had a very good reason for buying a 6400, and although it’s a terrible card for most people, it actually has a good reason to exist.

When we think of what makes a good GPU, performance is king. It’s certainly what the average GPU buyer has in mind when they’re scouring the web for benchmarks and performance data.

In 2016, I was one of the first people to buy a Radeon RX 480, one of AMD’s best GPUs ever, on account of its great performance, low price, and decent power efficiency. I enjoyed how it easily played games like the Witcher 3, Hitman (2016), and Skyrim with high or max graphics at 1080p while maintaining a frame rate of 60 frames per second (fps) or more. Even today, that’s a good level of performance.

But in terms of power efficiency, the RX 6400 puts its predecessor to shame. It’s nearly as fast as the RX 480, and despite its small size, it consumes less than a third of the power budget of the RX 480. As seen in many reviewers’ results when tested against the RX 570, which can stand in for the RX 480, the RX 6400 is only around 6% behind in average frame rates, while consuming 100 less watts of power. That’s a big deal.

Of course, one significant caveat is that the RX 6400 requires PCIe 4.0 in order to perform at its peak. With only PCIe 3.0 enabled, the RX 6400’s performance apparently declines by 15%. This is a particularly thorny issue for the RX 6400, as this means it underperforms on hardware that predates PCIe 4.0’s debut in 2019; ironically, most budget Ryzen 5000 CPUs don’t have PCIe 4.0, even though all Ryzen 3000 chips did. Thankfully, Intel has PCIe 4.0 support on all of its Alder Lake CPUs, even its sub-$100 models, the kind you’d want to pair with the RX 6400.

The RX 6400 is a low-profile GPU, meaning it’s quite compact physically, and meant to easily slot into smaller ITX builds where open space is limited. Although the RX 6400 is impressive compared to older GPUs, one may point out that it has almost identical performance to Nvidia’s old GTX 1650, which came out in 2019, a full three years before the RX 6400. That’s true — the GTX 1650 also comes in low-profile sizes and consumes about the same amount of power. So, what’s the RX 6400 doing that the 1650 can’t? Well, it comes down to availability and price.

While supply was one factor, the real nail in the coffin was the lack of new low-profile GPUs to pick up the slack. From 2016 to 2018, the only new low-profile GPU was the GT 1030, which is extremely slow, bottom-end, and consequently failed to bring down prices or offer a worthwhile experience. In 2019, the GTX 1650 came out and it was promising for its high performance and efficiency, but it was simply too expensive, usually selling for more than $200. Even today, most are going for $225 to $250, with one Gigabyte model currently available for $175.

The fact that the RX 6400 exists, especially at its price, make it an extremely unique graphics card.

I could be more bitter about the 6400’s price when I paid less than $100 for a good low-profile GPU in 2017, for a very similar PC you see in the image above. The thing is, low-profile cards for gaming aren’t just niche — they’re a niche within the niche of ITX-sized gaming PCs. People who love to build tiny computers (myself included) just have to take what they can get these days. I’m thankful that the RX 6400 exists, because it’s the first low-profile GPU in a long time that’s worth the cost.

Why I bought one of AMD’s worst GPUs

Google should have released a larger Pixel Watch