HomeNewsWhich RTX 4080 should you buy on release day?
News

Which RTX 4080 should you buy on release day? 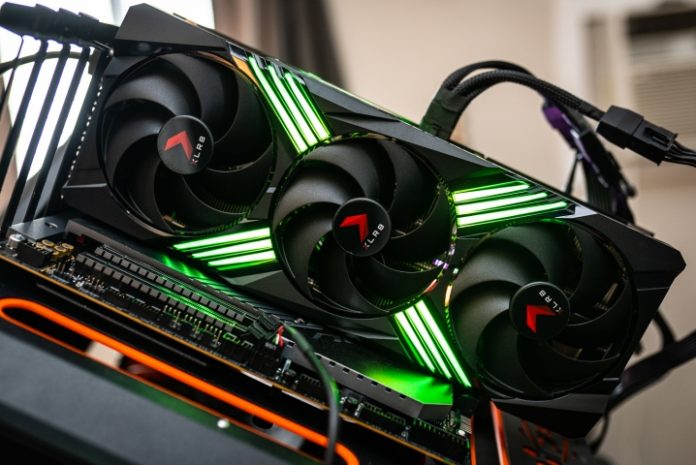 The RTX 4080 is here, and you can pick up a card now — if you’re quick enough, that is. Although the RTX 4080 will almost certainly sell out like the RTX 4090 did, that doesn’t mean you should pick up the first card you find in stock.

I tested three RTX 4080 models to see if there are any major differences in performance, power, and thermals: Nvidia’s Founder’s Edition design, PNY’s XLR8 Verto Epic-X, and MSI’s Suprim X. Although there aren’t large gaps in performance, more expensive models like the Suprim X can offer slight advantages outside of performance.

There are a handful of RTX 4080 models available now, but we could see more variations as time goes on. Short of EVGA, all the big names are offering cards: Asus, MSI, PNY, Zotac, and Gigabyte, to name a few. There are also models from Galax, Colorful, Gainward, and Inno3D, though they’re not as common in the U.S.

Here are all the RTX 4080 models we spotted in stock on launch day:

Although I wasn’t able to test all 15 models listed above (let alone the dozen or more from other board partners), I still got my hands on three RTX 4080s to compare: Nvidia’s Founder’s Edition design, the PNY RTX 4080 XLR8 Verto Epic-X, and the MSI RTX 4080 Suprim X. That gives us the reference design, a typical board partner card at list price, and an overclocked model to stack up against each other. 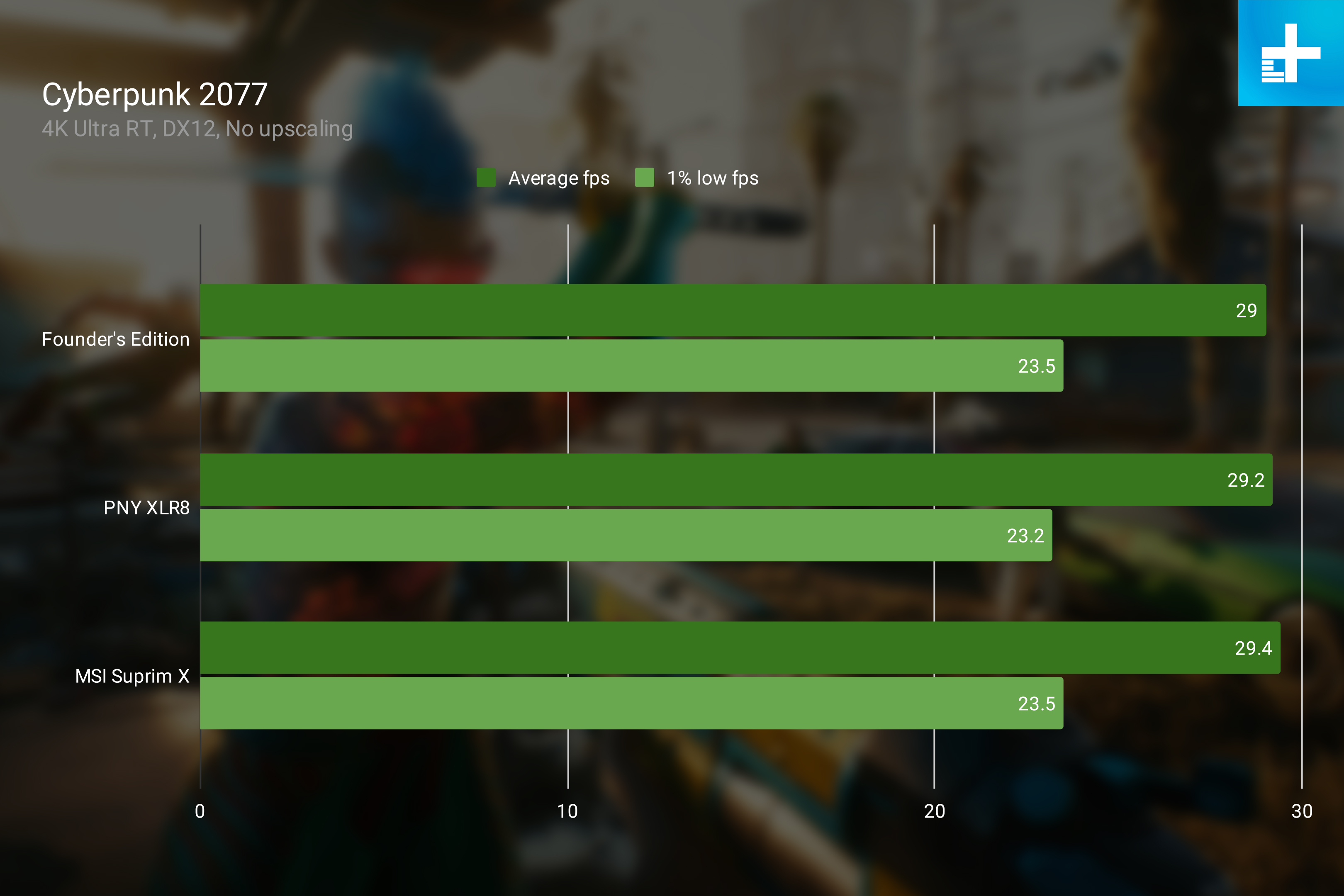 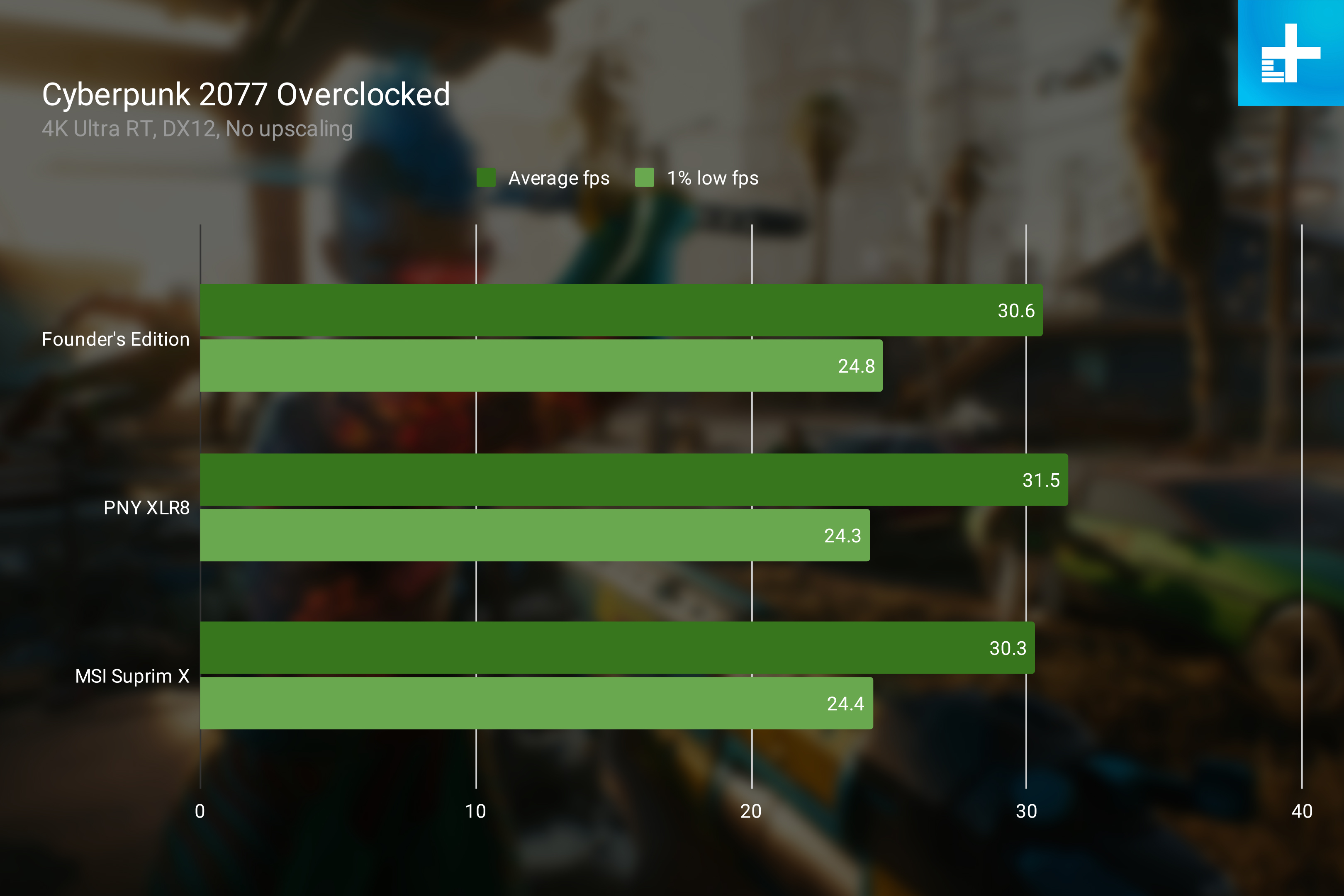 There aren’t large performance gaps between RTX 4080 models, so you don’t need to worry about it too much when selecting a card. Even overclocked models will produce the same performance in most games, as you can see in the chart above.

The most expensive card of the lineup, MSI’s Suprim X, produced half a frame more on average in its stock configuration. When I overclocked the three cards, I saw the same behavior. The PNY card enjoyed an extra frame, but that’s hardly a true lead.

Synthetic benchmarks show larger differences. In both 3DMark Time Spy and Port Royal, the MSI Suprim X outpaced the other two models (though only by 4% at most). What’s surprising is that PNY’s card is in last place, even compared to the Founder’s Edition design.

For my overclock, I pushed an extra 115MHz on the cores, as well as a 300MHz bump to the memory speed. The clock speed translated, as I’ll dig into in a later section, but that doesn’t always manifest as real-world performance.

Although some beefy overclocked models like the Asus ROG Strix may be able to provide slightly better performance, that extra performance is largely coming on the back of the cooler. In short, don’t be turned off by the 5% gap between the Founder’s Edition and PNY card — it’s a slight difference that doesn’t show up in actual games.

If anything, cards that offer more efficient operating modes are the way to go. The MSI Suprim X, for example, offers a BIOS toggle for Silent and Gaming modes depending on what you’re doing. The RTX 4080 rarely goes up to its full 320 watts of power, and my data suggests it’s most efficient slightly lower.

The larger differences between RTX 4080 models comes down to thermals and clock speed, though surprisingly not power. Nvidia got a reputation for unhinged power demands with its RTX 30-series GPUs, but the RTX 4080 is remarkably efficient. Even with a moderate overclock, the card hovers around 280 watts to 290W, which seems like the sweet spot for efficiency.

Out of the three I tested, the Suprim X actually maintained the same power draw at both stock and overclocked in Cyberpunk 2077, despite offering higher clock speeds. The PNY model was allowed to boost highest, though those few extra watts didn’t translate into performance.

For clock speed, all three models basically produced the same results. What’s interesting is that even the Founder’s Edition model climbed somewhere around 200MHz higher than the listed boost clock speed. That difference is usually what you would see with board partner cards, but Nvidia’s first-party offerings have gotten more aggressive with factory overclocks over the last few generations. MSI’s Suprim X was the raw winner in clock speed, but it’s hard to call it a victory considering how close my results are.

Where the Suprim X claims a dominating victory is thermals. At both stock and overclocked, it maintained 58 degrees Celsius on my test bench. That’s a 5-degree advantage over the Founder’s Edition cooler design, and easily the largest difference between the stock design and what you can get with a board partner card.

In generations past, it was worth spending a little extra money for a factory-overclocked GPU for peak performance. High-end models from recent generations don’t see a huge benefit from a bump in clock speed, however, largely due to how the cards are allowed to boost on their own. For cards like the Gigabyte Eagle and Gigabyte Eagle Overclocked, spending the extra $40 won’t manifest as extra performance, so it’s better to focus on the design and cooler over clock speed.

You’re not getting a huge boost in clock speed, anyway. The Eagle, for example, features a 15MHz bump over stock. Even the Asus ROG Strix, which is the most expensive RTX 4080 I could find, only comes with a 30MHz boost to the default speed.

For the price, the PNY XLR8 is a great option, assuming you prefer its design over the Founder’s Edition model. PNY offers its own overclocking utility where you can adjust the RGB lighting on the card, adding a bit of flair to your machine.

Spending up mostly buys you a nicer cooler. The Suprim X edges out a slight performance advantage, and that’s largely on the back of the massive cooler. It also comes with the dual BIOS toggle, a metal GPU support bracket, and a mouse pad. They’re small additions, but they add up to justify a slightly higher price.

MSI isn’t the only one, either. The $1,400 Zotac AMP Extreme comes with a GPU support, dual BIOS, and even a connector for an external RGB strip. Similarly, the $1,550 Asus ROG Strix comes with a support bracket, as well as two PWM fan headers, allowing you to tune a custom fan curve on case fans based on your GPU.

Those extras are the reason to spend more on an RTX 4080, not extra performance. Unless you’re into extreme GPU overclocking, all RTX 4080 models should perform at the same level.

If you can stretch your budget a bit, the MSI Suprim X is a great card. The design is fantastic, and it comes with the extra goodies you should expect out of a high-end model. The dual BIOS is what stands out for me, as the RTX 4080 rarely needs to run at full speed to reach maximum performance.

The most important thing is to spend extra for the additions board partners like MSI, Asus, and Zotac bring, not higher performance.

Facebook
Twitter
Pinterest
WhatsApp
Previous articleThese Chromebooks are under $100 right now – get them while you can
Next articleDell XPS 13 just got a massive price cut – get it for less than $1,000
- Advertisment -

Galaxy S22 Ultra vs. Xiaomi 12S Ultra camera battle is one for the ages