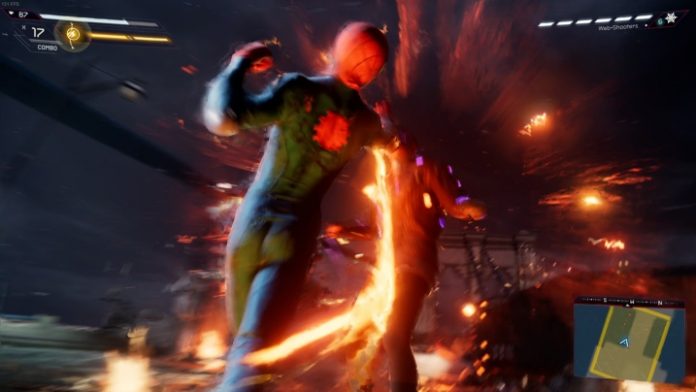 Nvidia’s latest upscaling tech joins Intel XeSS and AMD FidelityFX Super Resolution (FSR) in Miles Morales. They’re all great upscaling options, but the unique frame-generation capabilities of DLSS 3 are a sore point. If you plan on picking up Miles Morales on PC, make sure to keep DLSS Frame Generation turned off to avoid an occasional mess of AI image generation.

Miles Morales joins a growing list of games that support DLSS 3. This tech combines DLSS Super Resolution, which is available to all Nvidia RTX graphics cards, with DLSS Frame Generation. On RTX 40-series GPUs like the RTX 4090 and RTX 4080, your GPU can generate a unique frame every other frame with AI, massively improving performance. One frame is rendered by your graphics card, one is from the AI, and back-and-forth they go.

And indeed, DLSS 3 massively improves performance, especially with the heavy CPU bottleneck in Miles Morales. The compromise is image quality with Frame Generation, which is particularly nasty in the fast-paced action that comes with any Spider-Man release. The Super Resolution portion still runs and looks fantastic.

Combat sections see the biggest issues, especially with the snowy cityscape of Manhattan that Miles Morales is set in. The snow is a pain point itself, as you can see in the two screenshots below. In the rendered frame, the snow shows up perfectly, but it vanishes in the AI frame.

That’s a consistent trend. Particles like snow disappear with the AI frames, which manifests as a faint flickering with Frame Generation on. It’s never an issue in slow sections and much less noticeable when you’re swinging around the city. But Miles Morales is a game where you’re constantly in motion, beating up baddies and flying through dense city streets. Having the image fall apart when there’s any object in quick motion isn’t ideal for a game like this.

To illustrate how stark of a difference there can be, you can see the AI frame stacked up against a natively rendered frame below. One was captured with Frame Generation turned on and the other with it turned off, so they aren’t sequential frames.

And just to show that this isn’t an issue with encoding, here’s the frame immediately after for both scenes. The streaking lines disappear, and tabbing to the next frame in the scene, they return.

The issue extends beyond fast combat and flashy finishing moves as well. DLSS Frame Generation doesn’t take into account elements on your screen like the HUD. With upscaling, these elements are ignored or masked out because they aren’t demanding to show on screen, and reducing the quality is very noticeable. DLSS Frame Generation tries to create a new frame, HUD and all, leading to unfortunate situations where the HUD smears across the screen like you can see in the screenshots below.

Although DLSS Frame Generation doesn’t make Miles Morales unplayable, the unstable quality becomes noticeable once anything on the screen starts moving quickly. The good news is that DLSS Super Resolution, FSR, and XeSS all provide solid performance improvements with upscaling, so I’d recommend sticking with those.

Much more work to be done

Just like with Marvel’s Spider-Man when it was ported to PC earlier this year, Miles Morales is an litmus test for DLSS Frame Generation. It’s fast, and any image reconstruction technique — be it upscaling, frame generation, or something else — is pushed to the limit when there’s a lot happening quickly on screen.

This isn’t uncommon behavior for DLSS Frame Generation, though. As you can read in my RTX 4090 review, these artifacts show up when cruising around Night City in Cyberpunk 2077 and even doing something as mundane as running through grass in A Plague Tale Requiem. They aren’t as severe or frequent, but they’re present.

Frame generation isn’t going anywhere. AMD has already revealed that its upcoming FSR 3 will include a frame generation feature, and I wouldn’t be surprised to see Intel look into frame generation with its XeSS upscaling as well. There are some growing pains with the technology right now, though.

As time goes on, I don’t doubt Nvidia will continue to improve image quality for DLSS Frame Generation. That’s what happened with DLSS itself a few years ago, with the first version showcasing some nasty visual artifacts.

My main concern is DLSS 3 on graphics cards further down Nvidia’s product stack. We have the RTX 4090 and RTX 4080 right now, but less powerful cards like the rumored RTX 4060 and RTX 4050 could amplify image quality issues with DLSS Frame Generation. Every other frame is coming from the AI, so problems will become more noticeable at lower frame rates.

Although DLSS Frame Generation is disappointing in Spider-Man Miles Morales, the PC port is anything but. Across several test machines, I had rock-solid performance and the graphics menu is dense with settings to optimize your frame rate. This is definitely one to pick up if you missed the original release on PlayStation 5 — I’d just stick with upscaling over DLSS Frame Generation.

Facebook
Twitter
Pinterest
WhatsApp
Previous articleBlack Friday: Save $200 on the Samsung Galaxy Tab S8 Ultra
Next articleThe V3000 Plus is a giant dual PC case — with one drawback
- Advertisment -

Black Friday: Save $200 on the Samsung Galaxy Tab S8 Ultra