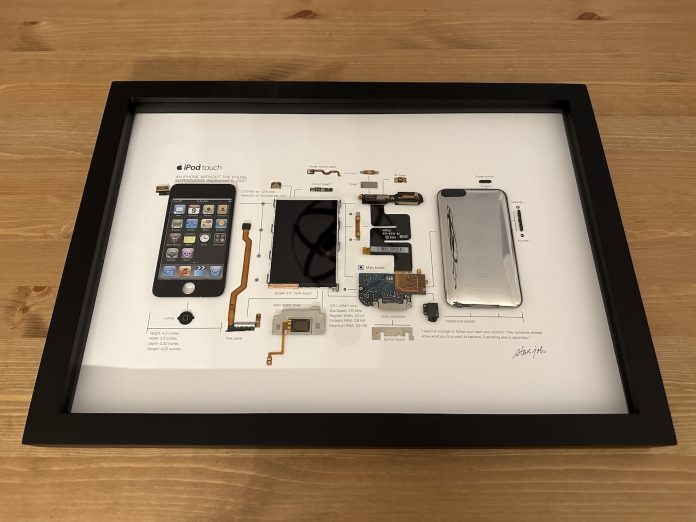 GRID Studio is known for creating custom wall art showcasing the history of iconic devices, ranging from the original iPhone to the original Game Boy. Each device is disassembled and the components are artistically displayed and labeled in a frame.

The company recently sent me their iPod touch frame for review. The original iPod touch was the first Apple product that I ever owned, and led me down the path of becoming an Apple reporter, so the device is very meaningful to me. However, note that the frame contains the second-generation iPod touch, released in September 2008.

Priced at $139 in the United States, the iPod touch frame is one of GRID Studio’s more affordable options and would make a great gift for an Apple fan this holiday season, especially after the final iPod touch was discontinued earlier this year. It also offers frames for several iPhones, the iPad mini, the iPod classic, and the Apple Watch.

The frame is nicely packaged in thick black paper with a ribbon and a wax seal. Inside, my frame was in good condition with the exception of two small scuffs on the rear side of the black border near the clips that keep the backboard secured. While unideal, this damage is very minor and is out of sight when the frame is hanging on the wall. 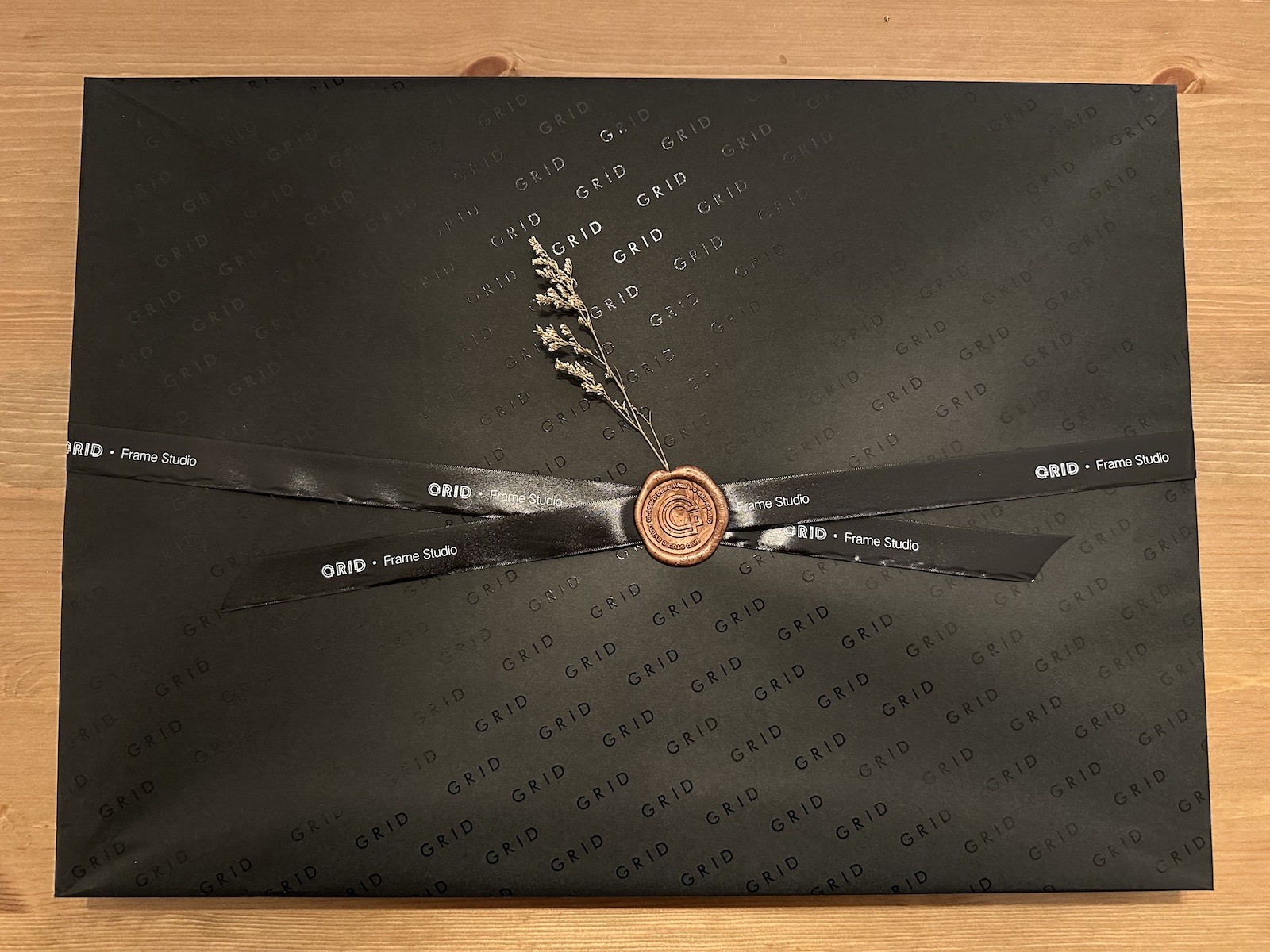 The front plastic cover is covered in protective film that needs to be removed. I immediately started tearing off the plastic film, but this resulted in pieces getting stuck under the black border, at which point I realized that it would have been a better idea to take off the back cover and remove the plastic film in one piece, so keep that in mind.

Components in the frame include the iPod touch’s front panel with a printed screenshot, Home button, 3.5-inch multi-touch display, logic board, rear shell with a headphone jack and 30-pin dock connector, various flex cables and buttons, and more. The frame also includes the original iPod touch’s wordmark and September 5, 2007 introduction date, along with a quote from Apple co-founder Steve Jobs.

There are some scratches and a tiny dent on the rear shell of the iPod touch, as the device is used, but this isn’t an issue to me and the frame would be much more expensive if it contained a brand new device. I do wish it were the original iPod touch, but the second-generation model is still old enough to capture the nostalgia of the device. 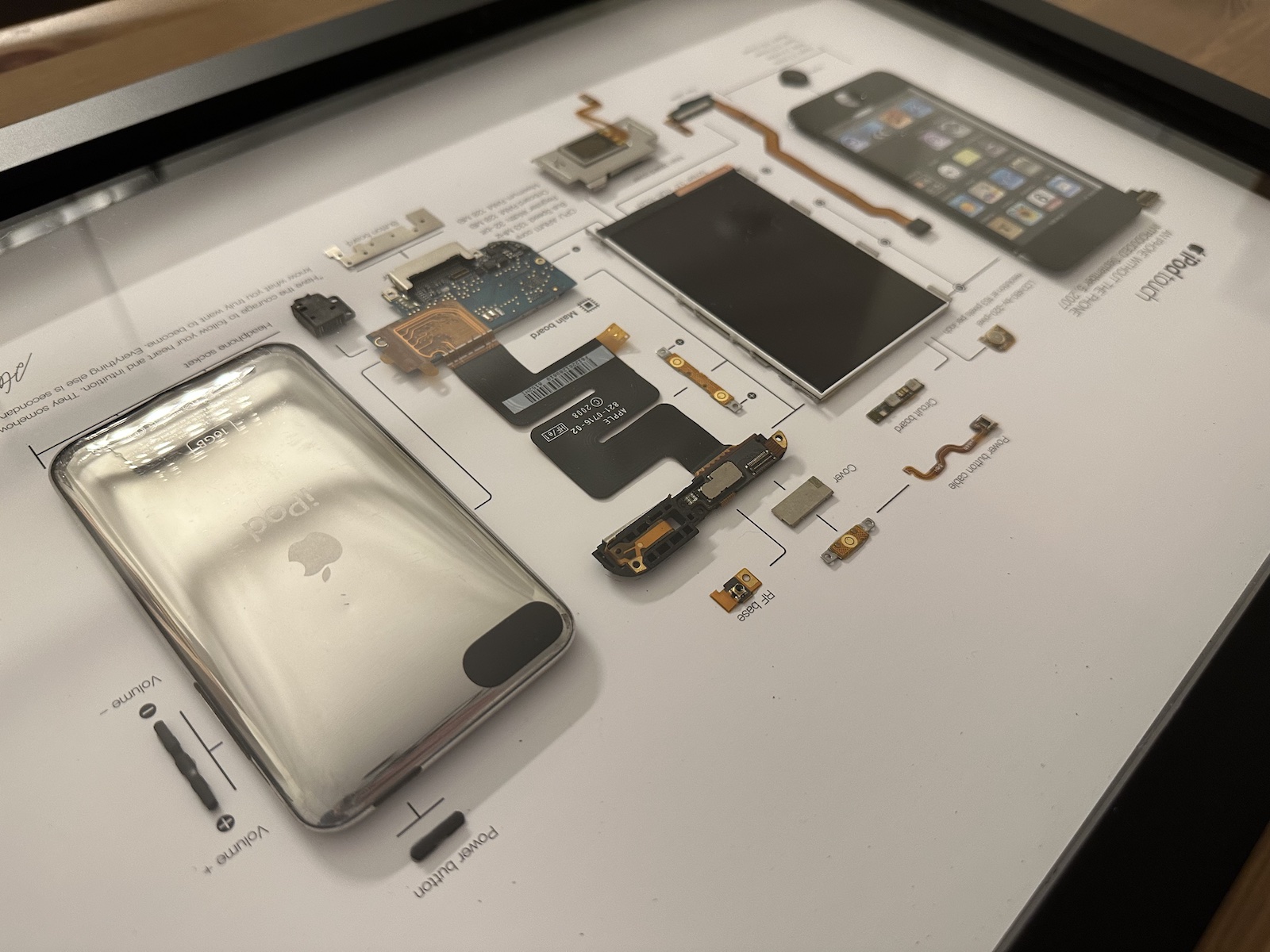 There are two small hooks on the back of the frame for hanging the artwork on a wall, and an additional pair of hooks in the box.

All in all, the frame is high quality and is a very cool piece of wall art. Beyond two tiny scuffs on the back of the frame, which may have arisen during shipping, I have no complaints. There is certainly cheaper wall art out there, but GRID Studio frames are worth considering if you are a devoted Apple fan or know someone who is.

GRID Studio’s frames can be purchased on its website, with many options still available for delivery before December 25.

Note: GRID Studio provided MacRumors with a framed ‌iPod touch for the purpose of this review, but no other compensation was received. This is not a paid advertisement.Tag: Grid StudioRelated Forum: iPod touch and iPod
This article, “Review: iPod Touch Lives On With GRID Studio’s Wall Art” first appeared on MacRumors.com

Facebook
Twitter
Pinterest
WhatsApp
Previous articleThis custom hoverboard is entirely powered by Raspberry Pi
Next article10 Things You Can Do With the Freeform App in iOS 16.2 and iPadOS 16.2