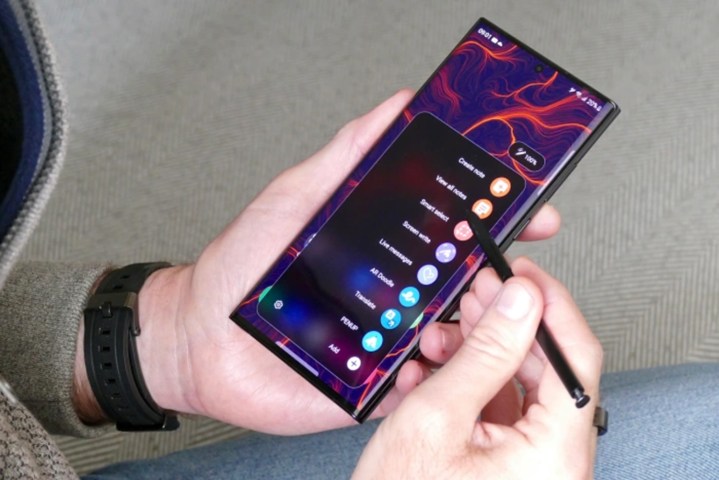 If you’ve had your eye on the Samsung Galaxy S22 Ultra since it was launched, now’s probably the best time to buy it. The smartphone’s down to $975 in Samsung’s Cyber Monday deals — that’s a savings of $225 from its original price of $1,200. There’s no telling when the offer will end though, so if it caught your attention, you should finalize the purchase as fast as possible.

Why you should buy the Samsung Galaxy S22 Ultra

The Samsung Galaxy S22 Ultra is the top-of-the-line model of the brand’s latest line of flagship smartphones. It made our list of the best smartphones as the best Android phone, partly because of how stylish it looks with its 6.8-inch Dynamic AMOLED 2X display and Gorilla Glass Victus+ protection. Inside the mobile device is the Qualcomm Snapdragon 8 Gen 1 processor, which promises smooth performance even while the Samsung Galaxy S22 Ultra is multitasking between several demanding apps.

Between the Samsung Galaxy S22 Ultra, Samsung Galaxy S22+, and Samsung Galaxy S22, the characteristics that are unique to the Galaxy S22 Ultra include a design that features more angular corners and a curved display, higher Quad HD+ resolution, a larger 5,000 mAh battery with fast 45-watt charging, and support for the S Pen that offers an extra input option for sketching, taking notes, and writing lists. The Galaxy S22 Ultra is also one of the best camera phones on the market right now with its 108MP main lens, 10MP periscope zoom, 10MP telephoto, and 12MP ultrawide at the rear, plus a 40MP selfie camera.

Here’s one of the best Cyber Monday phone deals that you can grab right now, as the Samsung Galaxy S22 Ultra is just $975, following a $225 discount to its sticker price of $1,200. We’re not sure how much time you’ve got to snag the offer though, so you better act fast and click that Buy Now button to secure your own Samsung Galaxy S22 Ultra for much cheaper than usual.