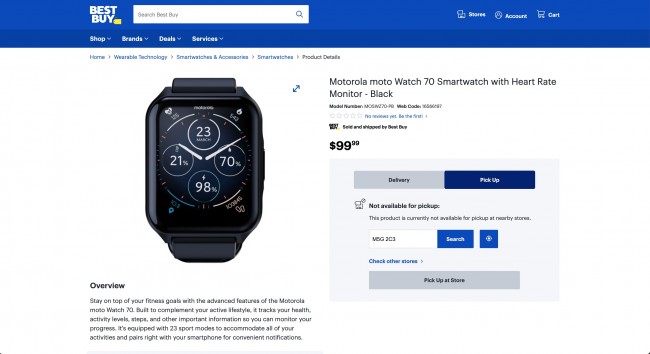 Motorola’s Moto Watch 70 is on its way to being released soon, as the wearable has just been listed on Best Buy Canada. The landing page reveals the product in its full glory, presenting its key specifications alongside a boring, conventional, and lazy design.

The Moto 70 features a 1.69-inch color display with a 240 x 280-pixel resolution. While we don’t know if the display is LCD or AMOLED, the case it’s housed in is zinc alloy. You’ll get a silicone watch band bundled with the device. As for other features, the Moto 70 sports heart-rate tracking alongside a SpO2 sensor and a gyroscope. Fitness features onboard include 23 sports modes.

As for connectivity, you will get Bluetooth 5.0 to pair it with your smartphone. According to the listing, the Moto 70 is rated to last up to 14 hours of continuous usage, which is poor considering it doesn’t run Wear OS.

Any version of a real-time operating system or RTOS (think smartwatches from Amazfit, Honor, and more) lasts more than a week. The upcoming Motorola smartwatch is touted to run Moto OS, which was also present on the Moto Watch 100 launched last year.

The Moto 70 is totally different from Moto 100 design-wise. Instead of a circular dial, it features a rectangular design that doesn’t look dissimilar from the likes of the Apple Watch and Amazfit GTS series. This is the same Motorola that once launched an exquisite Moto 360 back in 2014. Since then, the company has been sold to Lenovo, and it is now releasing products with uninspiring design languages. It’s as if the company doesn’t want to innovate and would rather play it on the safer side by launching wearables that resemble all other smartwatches on the market.

The Moto 70 is only available in black at CAD 99, which translates to $75. At that price, it will go up against the Amazfit Bip U Pro. The smartwatch is yet to be launched by Motorola, but the Best Buy listing indicates it’ll be coming soon.