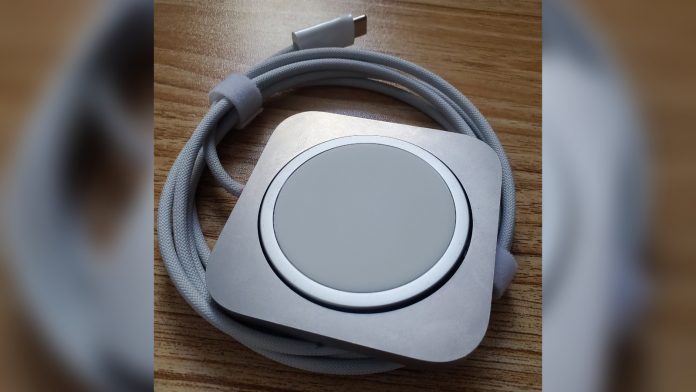 Images of an unreleased Apple MagSafe charging accessory called the “Apple Magic Charger” have surfaced online over the past couple of weeks.

Image via @TheBlueMister
Rare Apple product collector and Twitter user “TheBlueMister” first shared images of the unreleased accessory earlier this month. Since then, other collectors based in Asia seem to have got their hands on Design Validation Test (DVT) versions of the device and are sharing images of it online.

TheBlueMister has set about disassembling the accessory to restore it to working order, showing some of this process on Twitter. Connection to a Mac reveals that the unreleased accessory is called the “Apple Magic Charger.”

Hey I just got this charger called Apple Magic Charger
How can I active this [email protected] pic.twitter.com/m3Cvm1z70S

The accessory features a rubberized white ‌MagSafe‌ charger inside an anodized aluminum rounded square that can be pushed out into a vertical position. It seemingly has a Space Gray finish and includes a white rubberized base to keep it in place on a surface, as well as a built-in braided USB-C charging cable. It also appears to bear a resemblance to the iPhone Lightning Dock. The Twitter user known as “DuanRui” today shared additional images of the unreleased Apple Magic Charger.

The accessory’s design is similar to the hinged Apple Watch charger on the ‌MagSafe‌ Duo and the now-discontinued Apple Watch Magnetic Charging Dock, and is the first time a ‌MagSafe‌ charger has been seen in a hinged implementation on an official Apple accessory.

The design seems to be somewhat limited for the ‌iPhone‌ since it cannot be pushed upright in portrait orientation on the charger, proving useful for watching content in landscape mode only. The ‌MagSafe‌ puck could, of course, still charge an ‌iPhone‌ when flat, as well as AirPods that have a ‌MagSafe‌ Charging Case.

TheBlueMister says that an early version of the Apple Magic Charger’s design was limited to keeping an ‌iPhone‌ in the upright, horizontal position only, and these limitations were apparently among the key reasons that Apple canned the product.Tags: MagSafe, DuanRui, Prototypes
This article, “Images of Unreleased ‘Apple Magic Charger’ Surface Online” first appeared on MacRumors.com

Facebook
Twitter
Pinterest
WhatsApp
Previous articleThis 32-inch QHD gaming monitor is $200, and it’s selling fast
Next articleWhat’s Next for the iMac? What We Know on a New Design, M3 Chip, and More
- Advertisment -

Deals: Get Up to $50 Off Apple Watch Series 8 and 2nd Gen SE With Amazon’s New Sales

What’s Next for the iMac? What We Know on a New Design, M3 Chip, and More