HomeHow toHow to delete a BeReal post
How to 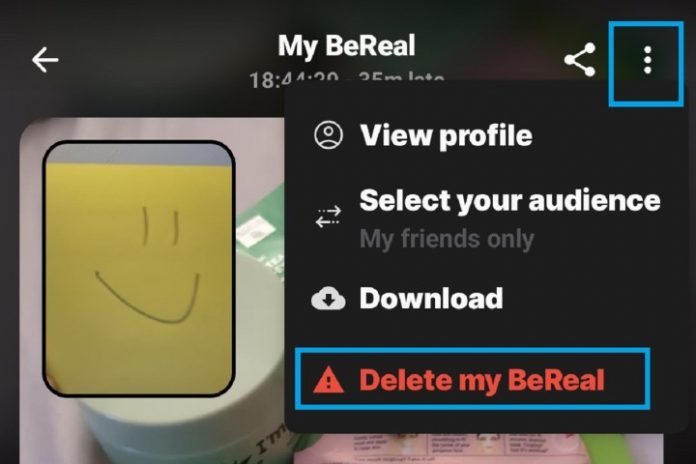 BeReal posts are meant to show you as you are, but sometimes that level of authenticity is just too awkward to post. Sometimes the app’s automatic selfie capture takes a selfie that’s just too goofy to share with your friends.

Or maybe you’d just rather take a photo of something else for today’s BeReal prompt. In any case, if you’re unhappy with a BeReal post you just published, don’t worry. You can delete it. And we can show you how. We’ll go over what you need to know about deleting BeReal posts and then we’ll guide you step-by-step on how to properly delete a BeReal post.

Though deleting a BeReal post is a fairly simple process, there are some things you should know about deleting posts before you do it:

How to delete a BeReal post: Android and iOS

(The screenshots featured in this article are from an Android device.)

Step 1: Open the BeReal you want to delete and then select the Three dots icon in the top right corner of your screen.

(For iOS users: You’ll also select a Three dots icon but this icon should be located below your BeReal.)

Step 2: From the menu that appears, choose Delete my BeReal.

Step 3: For both Android and iOS: You’ll be presented with a screen where you have to pick a reason for why you’re deleting your BeReal post. Then you’ll select Yes I’m sure.

Then you’ll select Delete to complete the process.

Should you buy a laptop on Black Friday or wait for Cyber Monday?

Should you buy an iPad on Black Friday or wait for Cyber Monday?