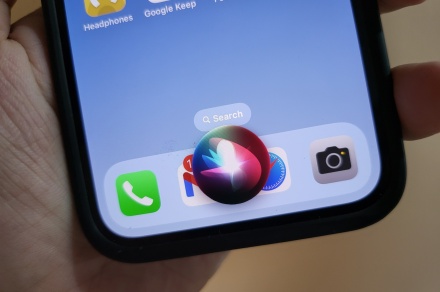 Most folks with an Apple device know that the easiest way to access its digital assistant is to call out “Hey, Siri.”

But it now appears that Apple is aiming to simplify the wake phrase by eliminating the word “Hey,” and going only with “Siri.”

News of the change comes from reliable Apple analyst Mark Gurman. In a report for Bloomberg on Sunday, Gurman notes that while it might seem like an easy change to make, the effort to make it happen actually requires a “significant amount of AI training and underlying engineering work.”

The challenge apparently comes in getting Siri to reliably recognize the single word “Siri” in different accents and dialects. It also gives the Siri engineers one less syllable to work with compared to “Hey, Siri.” As a result, to avoid accidental and potentially awkward situations where the digital assistant pipes up unexpectedly, Apple wants to be sure the new wake command is working perfectly before rolling it out, though according to Gurman we may have to wait until “next year or the year after” for it to arrive.

Apple is reportedly also keen to integrate Siri more deeply into third-party apps and services while at the same time improving its ability to understand commands and respond in the correct way.

Engineers have been working on the updates for the last few months and have been testing them out on employees, Gurman said.

Similar digital assistants developed by Amazon and Google also require wake words to get started. Amazon’s only requires you to call out a single word, “Alexa,” while Google’s relies on “OK, Google,” as the prompt.

Fortunately, if there’s a human or pet in your household called Alexa — a situation that could cause endless mishaps if you use any of Amazon’s smart devices — then Amazon’s system lets you change the wake word to “Amazon,” “Echo,” or “Computer.”

In his report, Gurman says he would like Apple to let you choose, by voice, which Siri device you want to respond. “Let me take out the world’s smallest violin here for owners of multiple Apple devices, but the company should really allow users to specify if they want to trigger their iPhone, iPad or HomePod for Siri,” the reporter wrote.

Of course, if you want to prevent your Apple device from always listening out for the Siri wake word, it’s easy to do. On the iPhone, for example, simply select Settings, Siri & Search, then toggle “listen for ‘Hey, Siri.”

For an easy way to activate the digital assistant without calling out, toggle “press side button for Siri,” located in the same section of Settings.

YouTube Music is making playlists stand out on the home tab

iPhone customers will have to wait longer for new handset, Apple says