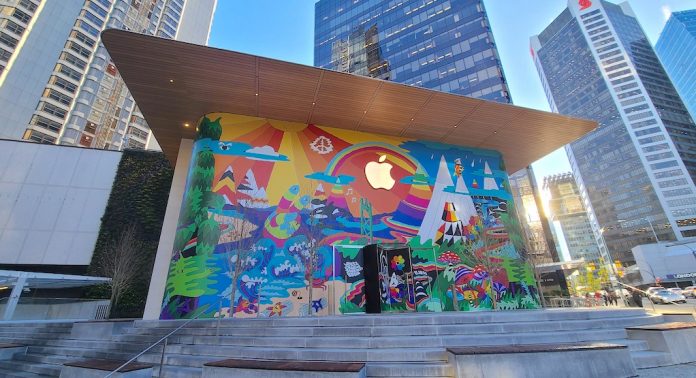 Apple today announced that it will be opening an impressive new street-facing store in Vancouver, British Columbia on Friday, November 18.

Apple Pacific Centre via Daily Hive
The new Apple Pacific Centre store is positioned diagonally on the corner of West Georgia and Howe Streets and faces the Vancouver Art Gallery. To celebrate the grand opening of the store, the glass facade is wrapped in colorful artwork created by prominent Canadian designer Mo Bofill in collaboration with Musqueam weaver and artist Debra Sparrow.

The flagship outdoor location will replace Apple’s existing store inside the adjacent Pacific Centre shopping mall, which originally opened in 2008. Vancouver-based publication Daily Hive shared photos of the new store earlier today, providing a closer look at the temporary artwork, wood plank ceiling, green wall backdrop, and terraced plaza. The two-floor store took over the spot of one of the mall’s former entrances.

Throughout the store’s grand opening weekend, visitors can participate in free Today at Apple sessions, including a live performance by Vancouver-based rapper and musician Boslen, a Q&A moderated by Apple Music radio host George Stromboloupoulos, a live performance by award-winning choreographer Chloé Arnold, and more.