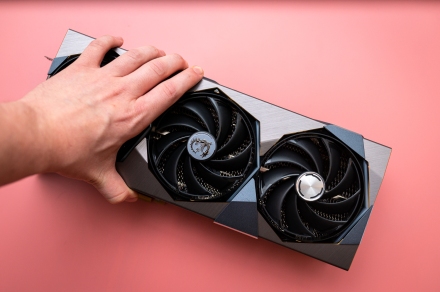 AMD took another jab at Nvidia’s issues with melting 12-pin connectors following a dig Team Red made during its RX 7900 XTX announcement. It’s not uncommon for AMD and Nvidia to spar during new product announcements, but this is happening under different circumstances. Nvidia is facing down a potential class-action lawsuit over the melting power connector.

Sasa Marinkovic, senior director of gaming marketing at AMD, tweeted: “Stay safe this holiday season” with an image of the dual 8-pin connectors on the upcoming RX 7900 XTX GPU. AMD made a similar comment when that GPU was announced on November 3, with AMD’s Scott Herkalman saying “there’s no need for a new power adapter” for the card with a figurative smile and wink.

Nvidia has drawn a lot of attention over the past several weeks as users continue to report melting power connectors on the RTX 4090. Since the first report in late October, 26 users have reported an issue through a megathread on the Nvidia subreddit.

Following the first reports, Nvidia sent a notice to board partners to send all damaged cards directly to the company for an in-depth investigation. Since then, Nvidia hasn’t shared much information outside of the fact that it’s continuing to investigate the problem.

It may have to produce more concrete answers soon, though. Lucas Genova, who purchased an RTX 4090 on release day, filed a class-action lawsuit against Nvidia on November 11. Nvidia was notified of the lawsuit on November 15, and it alleges that Nvidia “marketed and sold the RTX 4090 with a defective and dangerous power cable plug and socket, which has rendered consumers’ cards inoperable and poses a serious electrical and fire hazard for each and every purchaser.”

Those are bold claims, but just because a lawsuit alleges them doesn’t necessarily make them true. Multiple theories about the power connector failure have come forth since launch, but only Gamer’s Nexus has been able to reproduce the conditions for melting. The YouTube channel claims that the melting connector results from a combination of user error and poor design, stemming from the adapter not being fully seated and debris like dust working its way into the pins.

In our RTX 4090 review and RTX 4080 review, we didn’t experience a melting power connector after running the cards around the clock for over a week each. In speaking with board partners, Gamer’s Nexus says the failure is impacting somewhere between 0.05% and 0.1% of cards.

Although the lawsuit has been filed and assigned to a judge, Nvidia isn’t on trial yet. In the meantime, all we can do is wait for Nvidia to issue a conclusion on its investigation and to see if the lawsuit has any legs.

Both AMD and Nvidia are pushing on. Nvidia announced it will deliver a special address at CES on January 3, where we expect to see new GPUs announced. For AMD, it’s releasing the RX 7900 XTX and RX 7900 XT GPUs on December 13.

Facebook
Twitter
Pinterest
WhatsApp
Previous articleWant an RTX 4080? Nvidia may have a way to make it easier to get
Next articleBose QuietComfort 45, Sony WH-1000XM5 down to lowest-ever prices
- Advertisment -

This 49-inch Samsung curved QHD gaming monitor is $800 off