HomeNewsAmazon Bringing Matter to Echo Devices, But No iOS Support Until Early...
News

Amazon Bringing Matter to Echo Devices, But No iOS Support Until Early Next Year 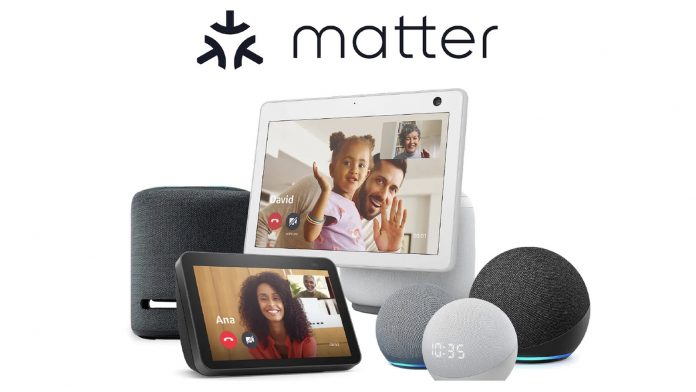 Amazon today announced that it will be updating 17 of its Echo devices to support the new Matter smart home standard over Wi-Fi next month, according to The Verge. The phased rollout will initially only be supported on Android and allow those Echo devices to serve as controllers only for plugs, bulbs, and switches. Amazon’s Matter support will expand early next year to include iOS devices and Thread networking, and support for additional categories of smart devices will come over time.

Amazon told The Verge that it is taking a phased approach due to the sheer number of devices involved and the complexity of getting everything transitioned over to the new standard.

“We’re bringing Matter support to well over 100 million devices across 30 Echo and Eero devices,” Chris DeCenzo, a senior principal engineer at Amazon and the company’s CSA board director, explained in an interview with The Verge. “This is an effort unprecedented in scale and complexity. It’s a big deal, and we need to make sure it goes smoothly.”

In particular, he pointed to the lack of available products in the other Matter categories for Amazon to test. “There aren’t many [Matter-compatible] locks, window shades, and thermostats out there yet, and we want to test everything in our beta program first.”

The delayed rollout of support on iOS is also reportedly due to Apple’s requirements, with Amazon saying that upgrading its Alexa app for iOS to be compatible with Matter requires using new APIs that Apple only just released and which Amazon will need to test to ensure everything is working properly.

Facebook
Twitter
Pinterest
WhatsApp
Previous articleThe Pixel 7 accidentally killed the OnePlus 10T — and it isn’t pretty
Next articleDeals: Get Up to $110 Off Beats Headphones and $39 Off Apple Watch SE/8 With New Lowest-Ever Prices
- Advertisment -

Latest MacBook Air just got a $100 price cut at Amazon

Iron Man VR review for Quest: This is what it feels like to be a super hero