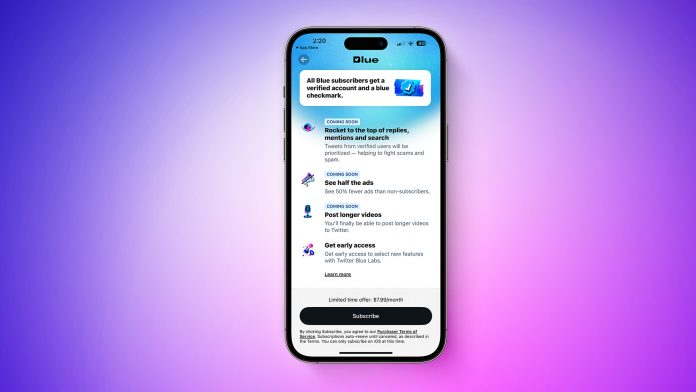 Twitter today rolled out its updated Twitter Blue subscription offering, which is priced at $7.99 per month. The new subscription is $3 more expensive than the prior $4.99 per month price, and it was introduced at the insistence of Twitter CEO Elon Musk.

Musk initially floated a $20 price point for Twitter Blue before settling on $8. The new subscription does away with ad-free articles for Twitter Blue subscribers, but it adds the same blue and white badge that Twitter previously limited to verified accounts.

Musk has pledged to make the badge available to all Twitter users, this morning calling it “the great leveler.” He has expressed distaste at the verification badge being provided only to accounts of public figures, businesses, celebrities, journalists, and other high-profile users who are in danger of being impersonated on the social network.

It continues to be unclear if Twitter will implement a method of identity verification now that the blue badge is no longer a verification symbol. Earlier today, Twitter rolled out “Official” labels some accounts that had previously been verified, but Musk said he “killed” the feature and now its status is unknown. As of now, accounts that had verification prior to the new Twitter Blue rolling out retain their verification badges, but Musk has said these will be removed for those who do not pay.

Musk today also held a meeting with Twitter advertisers, where he spoke on his moderation plans and future features. Twitter plans to build a content moderation council to make policy decisions, and he said that Twitter should honor freedom of speech, but viewpoints “don’t need to be amplified.”

Musk floated the idea that users would be able to send money to others on the platform in the future, and perhaps link their Twitter accounts to bank accounts. Twitter is also working on infrastructure for longer form video, with content payment options for creators. According to Musk, Twitter will be changing rapidly in the coming months, and some mistakes might be made. Features that do not work out will be rolled back. “If we do not try bold moves how will we make great improvements?” Musk said. Tag: Twitter
This article, “$8 Twitter Blue Subscription With Included Checkmark Now Available” first appeared on MacRumors.com