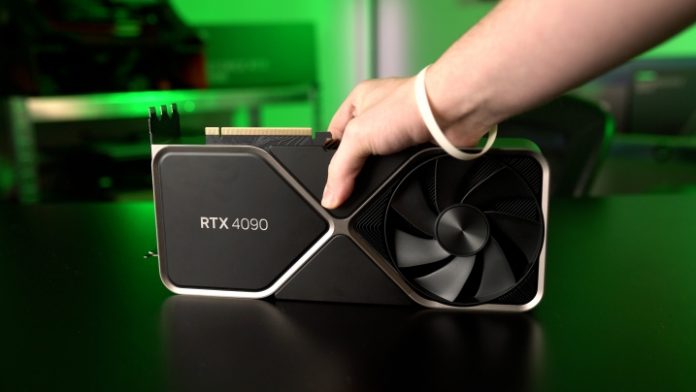 Nvidia’s new monster GPU, the RTX 4090, is coming on October 12. I wouldn’t blame you if you already have a few browser tabs open to pick one up the moment it becomes available. After all, last time we were standing on the edge of a new GPU generation, cards went out of stock in seconds and stayed that way for nearly two years.

But this release is going to be different. As exciting as the next generation of GPUs is, I won’t be buying one on day one, and I’m here to suggest you resist the urge as well.

A hype train (with context)

Hype for anything means one thing — scalpers. From concert tickets to sneakers to GPUs, if there’s a lot of demand and limited supply (like there always is for high-end graphics cards), scalpers will take advantage and try to snatch up as many of them as possible. These days, there are a lot of tools to help scalpers get the upper hand, and that might make you think you need to make the first move.

Anyone reading this column knows about bots — even the U.S. government knows, with measures like the “Grinch Bots” Act making the rounds — but it’s important to put a name to a face. Stellar AIO is one popular tool that supports a wide variety of websites with high-demand products including clothing, shoes, and electronics. And it specifically supports AMD and EVGA, which stand out like a sore thumb among direct sellers like Yeezy and Topps.

I want to avoid linking directly to too many of these bots, but a quick Google search will reveal dozens of scalping tools, as well as supporting articles explaining just how much of a cash cow GPUs can be. You’ll also find several forum posts like this one on the Linus Tech Tips forum, with gamers even contemplating building (or buying) a bot to secure a GPU of their own.

The launch excitement will subside and scalpers will move onto to more profitable ventures.

The bot discussion has died down as GPU prices have started to return to normal. But don’t count bots out. With the RTX 4090 swiftly approaching, the tools and demand are in place for scalpers to jump in and buy up as much stock as they can. After all, scalpers brought in over $60 million in revenue on RTX 30-series cards in the first four months they were on the market, and any reseller would want to return to that well.

A lot is different this time around, though. Bots are sure to come, and scalpers are all but guaranteed to catapult prices on the secondhand market, but the launch excitement will subside and scalpers will move onto to more profitable ventures. And that’s because with this generation, we don’t have a massive silicon shortage to contend with.

Preparing for a shortage that won’t come

If you missed the RTX 30-series launch, you’ve probably been kicking yourself for not spamming your F5 key to get a card at list price. And you’ve probably felt the mid-2021 defeat surrounding high GPU prices. I’ve heard it countless times: “I’ll just wait until 40-series comes out.” You don’t have to resort to a bot or slamming your keyboard to get a GPU this generation, though.

It will probably look a lot like we’re headed for another shortage when the RTX 4090 releases, but give it time.

We’re no longer contending with a GPU shortage — if anything, we have a GPU surplus right now. The last few generations have brought short-term shortages as scalpers capitalize on those dead set on being early adopters, and the RTX 40-series likely won’t be any different. Unlike the previous generation, however, that short-term demand won’t lead into a long-term shortage with compounding factors like tariffs and component shortages.

It will probably look a lot like we’re headed for another shortage when the RTX 4090 releases, but give it time. The factors that led to the GPU shortage last generation aren’t present this time around.

On top of that, the demand from cryptocurrency miners won’t be nearly as fierce. Ethereum, which comprised the lion’s share of GPU mining, has moved on to proof of stake — mining is a thing of the past, at least for this coin. Don’t underestimate the impact of mining on GPU demand, either. In the first half of 2021, some estimates said a quarter of all GPU sales came from miners.

With crypto down and the supply chain factors that contributed to the GPU shortage mostly solved, the only reason to buy an RTX 4090 on release day is if you absolutely need the card right away or just don’t care if it’s more expensive. I imagine most people reading this don’t fall into either camp. Even if you want the top dog GPU, don’t resort to paying scalper prices. They won’t stick around for long.

Comparative performance is another reason to hold off on day one. Rest assured, I’m hard at work on our RTX 4090 review, and I’ll share my results as soon as I can. Even before a single benchmark is out there, though, it’s easy to see the RTX 4090 will win by default — at least in terms of raw performance.

It’s the first card in a new generation, and the most powerful of Nvidia’s currently announced cards. Without any competition from AMD, the RTX 4090 is almost sure to automatically top every performance chart. There’s nothing to reasonably compare it to except for the previous generation.

We already know that the (relatively) cheaper RTX 4080 16GB and RTX 4080 12GB are arriving November, and AMD is set to launch its next-gen GPUs on November 3. It’s a similar situation as AMD’s Ryzen 7000 and Intel’s Raptor Lake — with the launches stacked so closely to each other, it’s worth waiting at least a few weeks to get a full picture of how the next generation will play out.

Even if the RTX 4090 is everything Nvidia promised and more, taking some time to see how competing cards will stack up is a very good idea.

Usually, it’s best to make your PC upgrade and building decisions with what’s available at the time, not what could be available in the future. But with these launches so close, waiting is the best option.

The next generation is exciting. It’s good to hold on to that excitement, but don’t let the last two years of high GPU prices and sustained shortages guide your buying decisions — as always, performance, pricing, and features are what really matter, and there’s a lot to talk about on that front in the coming weeks.

Facebook
Twitter
Pinterest
WhatsApp
Previous articleIs there a Surfshark free trial? What you need to know
Next articleDoes the Google Pixel 7 have face unlock? Yes, but there’s a catch