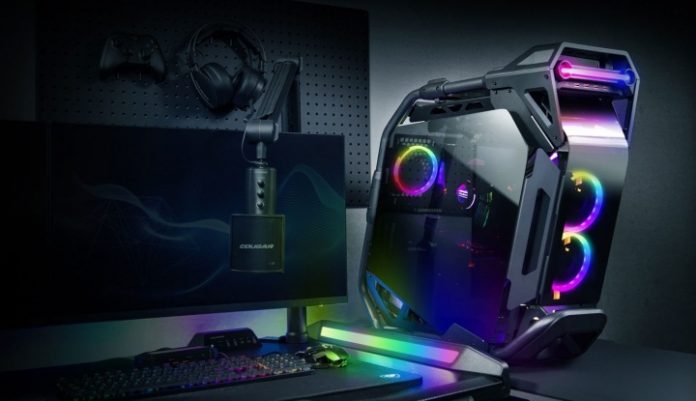 If you’re a fan of unique PC cases, you might like this new release from Cougar, a company that makes PC components and gaming gear. Easily one of the weirdest cases I’ve ever seen, the Cougar Cratus is a massive desktop case made to house some of the best components on the market.

However, this is definitely one of those things that you can either love or hate — it’s hard to find a middle ground with a design such as this. Let’s take a closer look at this unusual tempered glass case.

When it comes to desktop PC cases, especially those aimed at gamers, manufacturers continue trying to create the best cases they can while also striving to keep the design somewhat interesting. We all know what a gaming PC case looks like these days, and indeed, most of them look just about the same. Cougar’s Cratus is now here to break with the convention and serve up something that’s equal parts odd and impressive.

The Cougar Cratus is a massive case, measuring 283mm in width, 636mm in height, and 635 in depth. It’s large enough to house an E-ATX motherboard. It features a strange, tilted design with tubular runs that support the case’s foundation. I can’t tell if it’s meant to resemble Robocop, a sports car, or a mix of the two, but the design is certainly unique. Whether it fits your home and your desk is another thing entirely, but I could see it looking cool in a gaming setting.

Fans of RGB lighting will like the RGB light bar at the top of the case, and of course, the fans are RGB as well if you want to add even more pizzaz to the already-striking-in-design Cratus.  The case features tempered glass panels at the top, front, and sides, meaning that you’ll be able to see your PC’s internals from every angle. It makes an impression, especially with the flashy lighting.

Aside from the glass and the tubes, the case also has a very open-air kind of design, meaning fantastic airflow — but also, potentially, a fair bit of dust build-up.

If you’re about to build a new PC, using one of the best GPUs and CPUs, you’re going to need a whole lot of cooling to keep these beasts at a comfortable temperature. In that regard, the Cougar Cratus definitely delivers — with three case fans and room for loads more, you should see good temps across the board. On top of the fans that are already included, you can also install three 120mm fans on the top and on the sides, a 120mm rear fan, and two fans on the front. The front and top mounts can be used for two 140mm fans instead, too, and the case supports radiator sizes of up to 360mm on the side and at the top as well as 280mm at the front.

We don’t know how much this case is going to cost or when it will become available for sale. It certainly has a divisive design, much like this breathing CyberPowerPC case that was revealed during CES 2022.