HomeNewsThis $300 battery pack was a godsend on my trip to Comic...
News 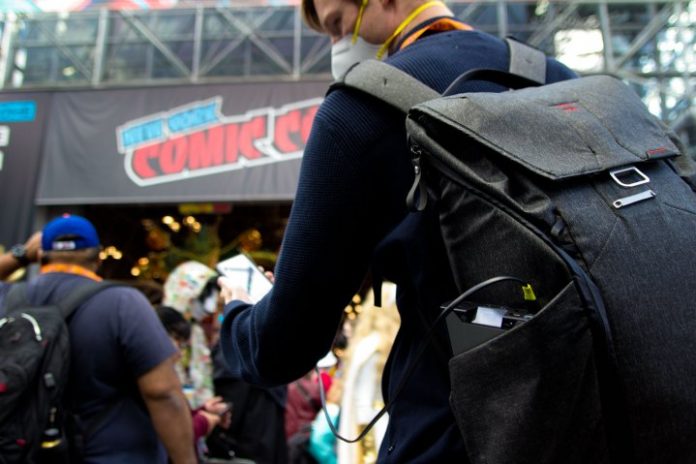 Over the summer, I had played around with the Goal Zero Sherpa 100AC backup battery to use alongside some big honkin’ solar panels. I had woefully underestimated the power input from the panels, so the Sherpa’s charge was routinely maxed out. Not long after, Goal Zero released an update to the Sherpa 100AC, which I was eager to try out. The latest generation significantly increases the power output and makes some big changes to its display. A road trip to New York Comic Con proved to be a fine crucible to test this pack.

One of my favorite features of the Goal Zero Sherpa 100AC was the wireless charging pad smack dab on the top. Its power output has been increased from 5 watts to 15W for faster charging. As usual, it can be tricky finding the right spot for charging to kick in, and you still need to tap a button on the Sherpa to toggle wireless charging.

On the front are two USB-A ports, two USB-C ports, and a standard AC plug. Like the wireless charging feature, there are two dedicated buttons to activate either the AC or USB outlets. Output has been increased on one of the USB-C slots from 60W to 100W, which is particularly handy for charging the Sherpa more quickly.

There are some new switches on the back for deciding whether to set the USB-C ports to be inputs or outputs. I learned the hard way not to leave it on the Auto setting as the Sherpa slurped up all the power from another backup battery rather than charge that second battery as intended. The USB-A ports remain at 12W as in the last generation, and the overall 94.7-watt-hour capacity is also unchanged.

The big change is the display. It’s now set at an angle so you can check the status from above more easily. The previous generation’s screen was flush with the pack, though I found it to be higher quality, showing a wider range of information. The new screen has some color elements, but that’s dampened by light leaking through the USB-A slots.

The physical footprint is nearly identical to the previous Sherpa. It kept the welcome rubber ridges to give it extra grip while sitting on our car dash. The old version had dedicated storage cavities along the edges for charging cables which are missed in this generation, which opted instead for solid bumpers. The solar input port has been moved to the back, which is great. If you are solar charging, there’s already going to be enough other stuff plugged into the front. That said, a battery pack this size is only really appropriate for smaller panels, which I’m not typically a fan of.

On the move, the Sherpa 100AC was helpful for being able to provide a quick charge without taking up a lot of room in my bag. Even in spots where I had access to a plug, like in the hotel room or in the car, the number of outlets was limited, or cables couldn’t reach far enough. The Sherpa acted as a great hub for charging multiple devices at once in those instances.

The $300 asking price can be a lot to swallow, but should you ever find yourself in a situation where a big backup battery can come in handy, the Goal Zero Sherpa 100AC is among the best out there.