HomeNewsThe RTX 4090 has already sold for over twice its retail price...
News 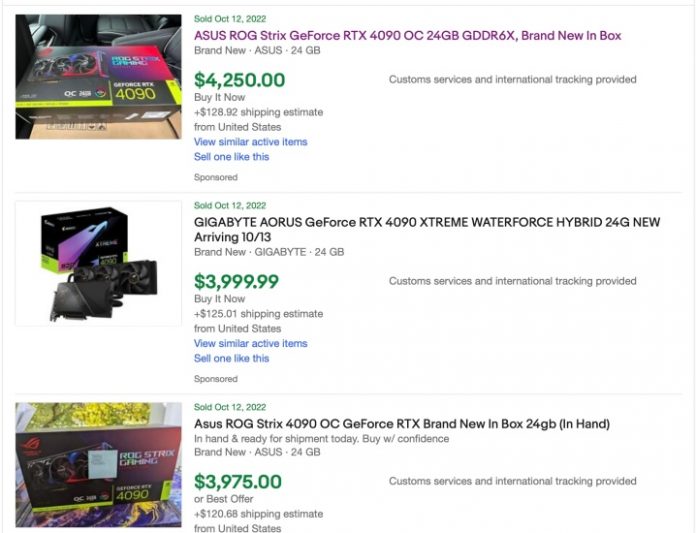 First there was the Van Halen concert that sold out in 18 minutes in 2004. Then there was the PlayStation 5. Now the GeForce RTX 4090 is the latest hot thing to get snatched up by scalpers and resold at exorbitant prices, sometimes as high as double its retail price.

No joke. This massive GPU was already the most expensive card ever, with a retail price of $1,599. It sold out the day Nvidia released it, of course, and then quickly began appearing on eBay for prices ranging from $2,500 to $4,250. People are actually paying these prices, too.

The majority of the RTX 4090 listings on eBay are closed within moments of getting posted. This is similar to what happened when the PS5 first released in November 2020. Scalpers bought up the units faster than Sony could ship them and began reselling them at insane markups.

The Nvidia GeForce RTX 4090 is worth a pretty penny, there’s no doubt about it. It has a base clock speed of 2.23GHz and a boosted speed of 2.53GHz. It packs more than 16,000 CUDA cores and 24 GB of GDDR6X VRAM. This is the crème de la crème of graphics cards, so serious gamers will definitely want to get their hands on it. But for over $4,000?

Some of the lower-priced RTX 4090 cards on eBay were reasonably priced around $1,600. Be wary, however. It’s possible that some are frauds or outright scams, which is something we saw often during the height of the GPU shortage. You don’t want to be the person who spent $1,600 on an RTX 3080 in a shiny plastic case.

All this was something we were hoping to avoid this time around, and we still have optimism that the market will settle back to normal quickly. Either way, it’s best to wait it out until some of the hype around the launch dies down.