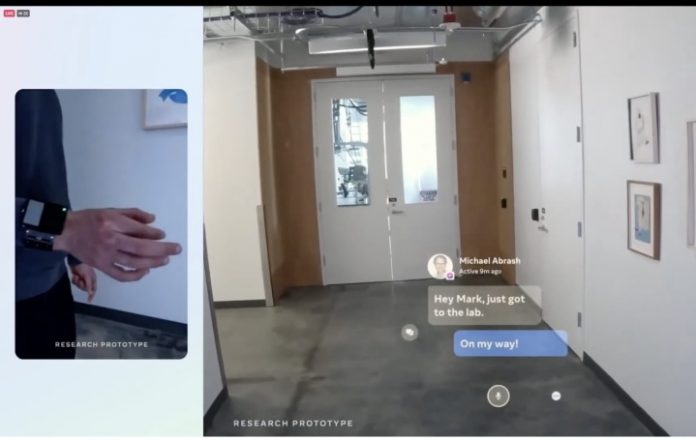 Meta announced some big things during its Meta Connect presentation, including the Quest Pro and other technologies revolving around the metaverse. Toward the end of the presentation, Meta showed off an early prototype of a new wearable that seems to work in conjunction with future augmented reality (AR) glasses — allowing you to control AR with your brain and motor neuron signals.

What was shown was very brief and clearly a super early prototype, so it probably won’t look the same whenever this does come out. From what we were able to see, the wearable appears to go around your wrist, similar to a smartwatch like the Apple Watch or Google Pixel Watch. It features a very large square display, and it looks like some bits of information may show up on the display, though it could have also been glare.

When this wearable is attached, you can access your messages on the mysterious AR glasses with a “gentle flick of the thumb,” and another “quick movement” lets you answer with a canned response. Another gesture brings up a zoom slider camera control, allowing you to take a photo of what you’re seeing in the glasses, and then share it with someone quickly.

“The goal here is to make these interfaces faster, higher bandwidth, and a lot more natural,” Mark Zuckerberg said when showing off this prototype. He also made it clear that this is still in the research phase, as the company has done some earlier research on electromyography (EMG) before, but the demo itself was “pretty mind-blowing.”

Again, this was a very brief demo, and we only caught a glimpse of what the wearable on the wrist would look like, as the glasses were not shown at all.

The idea of AR glasses is one that excites me, despite the failure of Google Glass years ago. While I’m not a huge fan of Meta itself, seeing this technology in action is cool, though I honestly could do without a large, clunky-looking device on my wrist. There’s been a lot of speculation about Apple coming out with its own VR headset or AR glasses, and I’m hoping that Apple takes some cues from this Meta Connect and makes it sleeker.