HomeNewsIs the Apple Watch UItra too big? We took a bunch of...
News 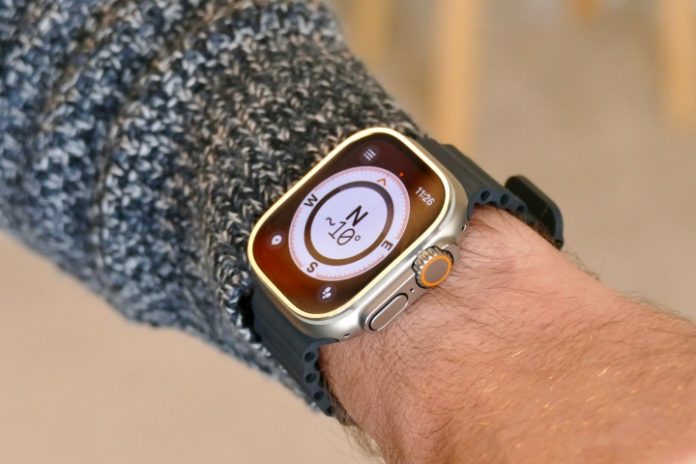 We know what you’re thinking: Is the Apple Watch Ultra too big? It’s definitely bigger than the regular Apple Watch Series 8 and Apple Watch SE 2, but does that mean there’s no way it’ll look sensible on your wrist?

The only real way to know is to try one on, but if that’s not an option, or you’ve found a good deal and want to jump on it now, here’s our guide on how big (or not) the Apple Watch Ultra may look on your wrist.

How big is the Apple Watch Ultra?

Before we get to some comparisons and real-world experience, let’s talk about the Apple Watch Ultra’s dimensions and how they stack up against Apple’s other current wearables.

Comparing the Ultra with other Apple Watches

If you already own, or have previously tried on, other Apple Watch models, how does the Apple Watch Ultra compare? It’s most definitely bigger than the Series 8 and Watch SE 2, but really, “bigger” is not a very helpful or accurate description. The Apple Watch Ultra is chunkier, and it’s this that makes it visually look bigger than it actually feels on your wrist. The proportions are excellent, and because the basic shape of the normal Apple Watch has been retained, it’s comfortable, too. 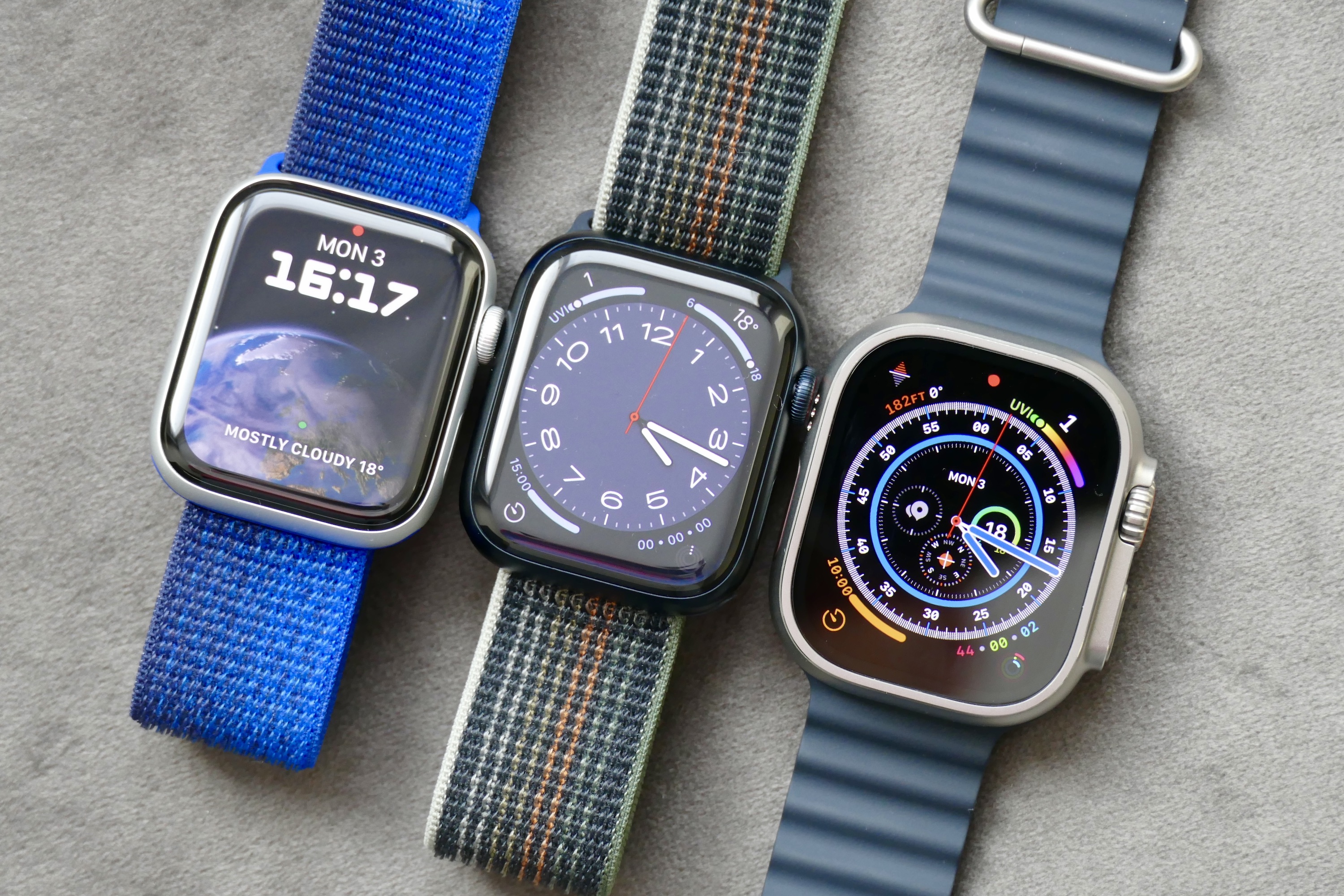 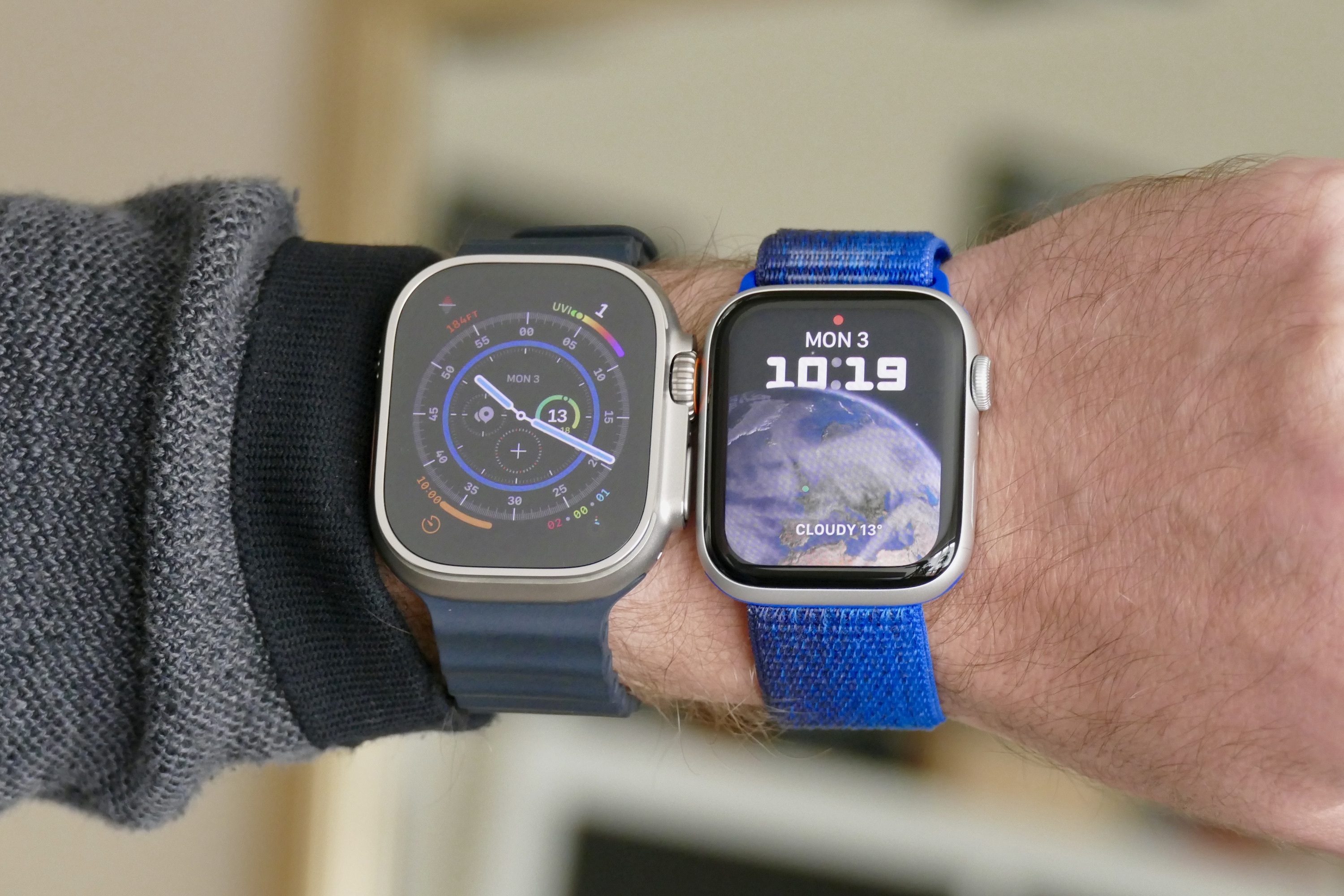 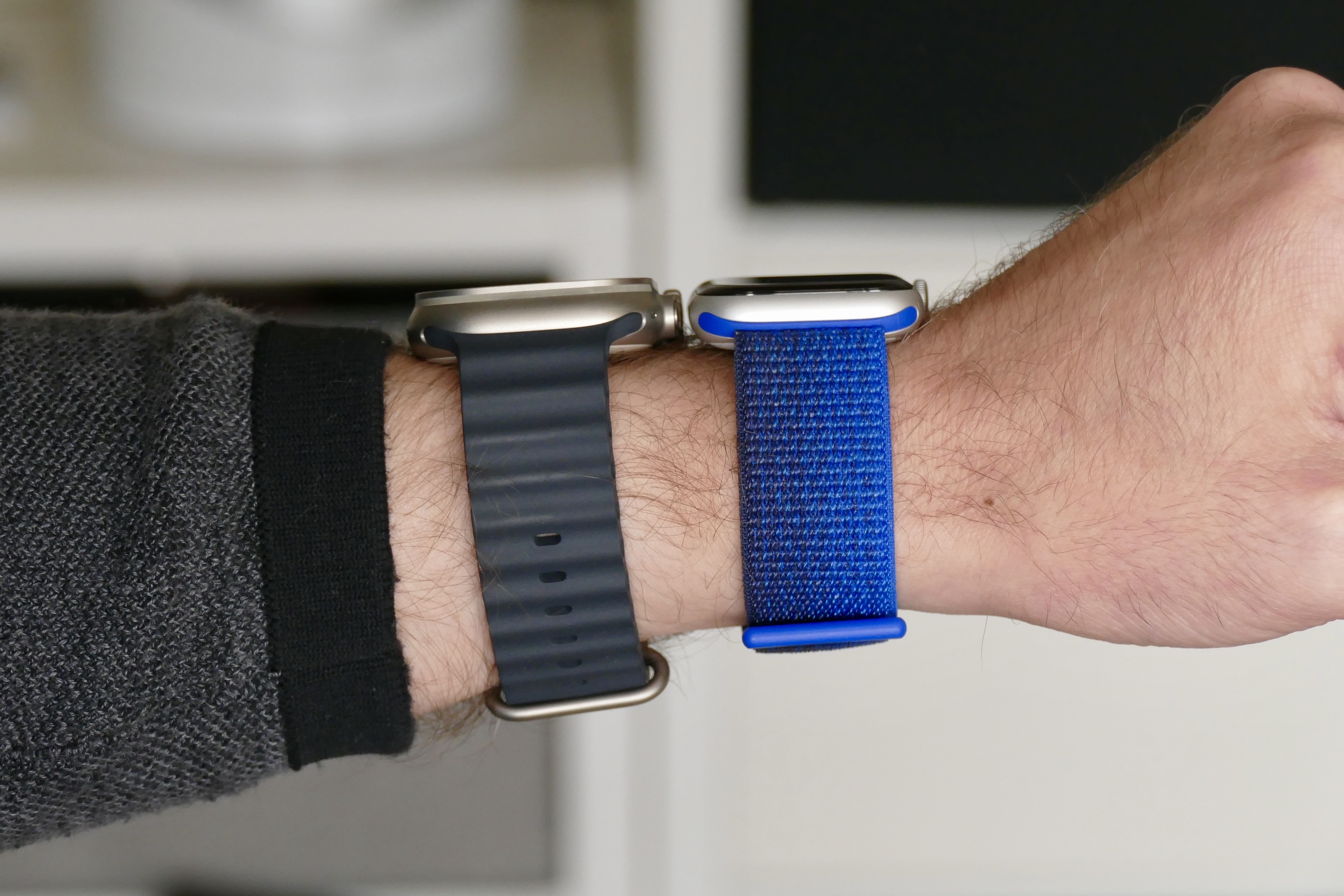 It’s not as sleek, due to the guard around the Digital Crown, and the raised bezel around the screen adds quite a lot to the height of the smartwatch. It still fits under cuffs, but you notice it’s there more than you do the 45mm Series 8 or 44mm Watch SE 2, which are the models featured in the photos above. It’s heavier than both, but it’s still under 100 grams with the band attached. If you’ve worn any traditional diver’s watch then you may find this is an acceptable weight, but if you’re coming from a fitness band, then you’ll definitely feel the additional bulk for a while.

Unsurprisingly, the largest difference is with the Apple Watch Series 3. I’m wearing the 42mm version in the photo, but it still manages to look small next to the Watch Ultra, with the case length being barely any longer than the Ultra’s button guard. If you wear a Series 3, the Apple Watch Ultra is a big step up in every conceivable way — especially if you either find the 42mm version quite large or wear the smaller 38mm model.

If you own a traditional watch, you may find it easier to visualize how big the Apple Watch Ultra looks on your wrist by seeing a few examples. We’ve already put it alongside various Casio G-Shock watches here, as the Apple Watch Ultra wears similarly to many of the most popular models. But chances are if you wear a G-Shock now, the Apple Watch Ultra’s size probably isn’t a concern as you’re clearly fine with sizable wrist wear. 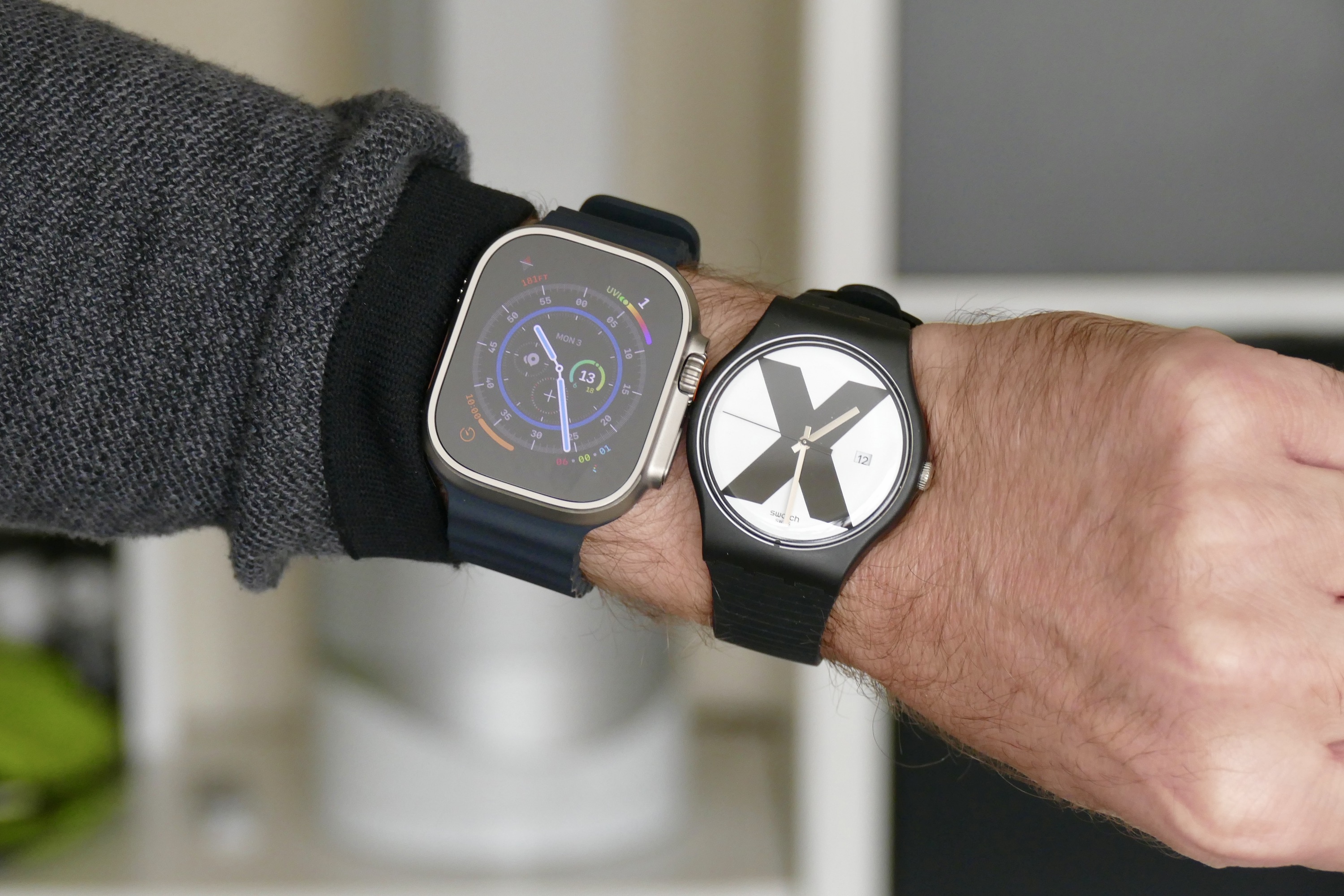 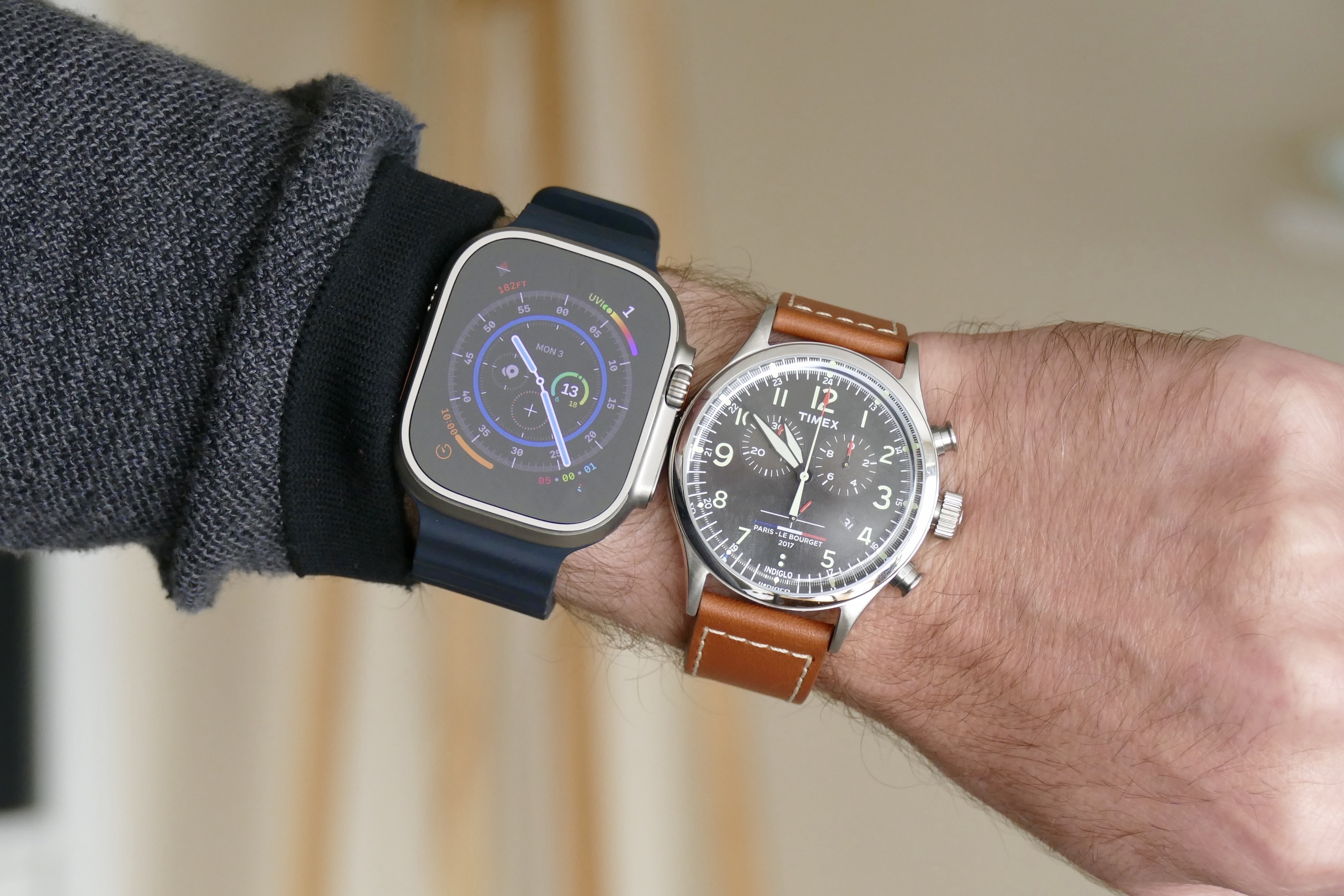 What if you wear a Swatch? You can see it here next to a 41mm Swatch XX-Rated watch, which shows when you take in the entire 47mm lug-to-lug measurement, the Ultra doesn’t take up much more wrist space. It’s much thicker, though, as the Swatch is just under 10mm thick. If you wear a Timex, you can also see it next to a 42mm Waterbury Chronograph. Despite its 12mm thickness, it manages to sit almost as proud on your wrist as the Apple Watch Ultra.

If you wear a more modest watch, what will it be like? The Nodus Sector Dive has a 39mm case (but still a 47mm lug-to-lug) and is 12mm thick, but it manages to look quite compact on your wrist. The Tissot Tradition has a 42mm case but is a mere 7.4mm thick, so it really emphasizes the height of the Apple Watch Ultra. For reference, I’m wearing all the watches in these photos, and my wrist has a 6.5-inch circumference, so measure yours to get the best comparison. 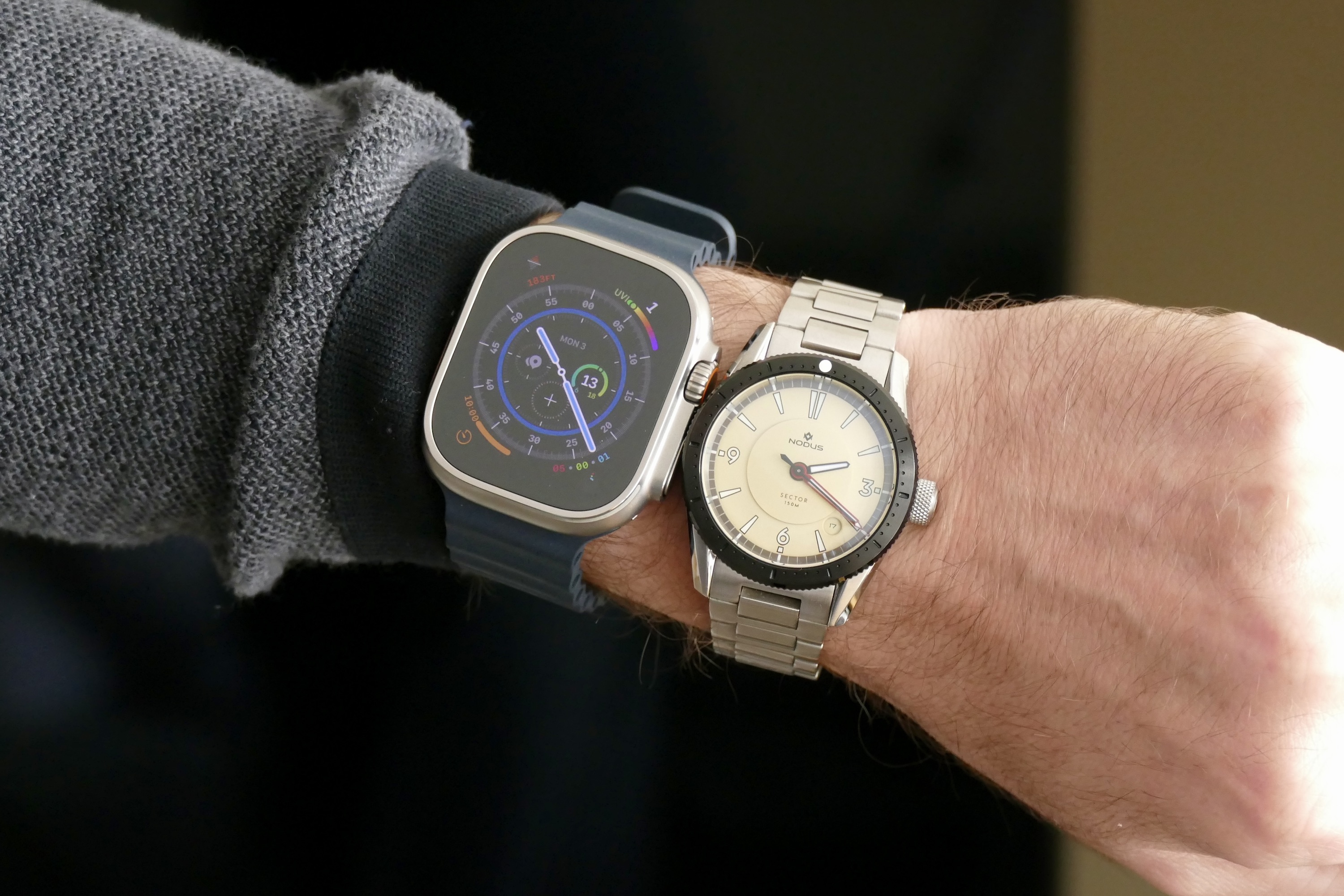 The takeaway here is that the Apple Watch Ultra is indeed a big watch, but it doesn’t take up much more space on your wrist compared to many other watches, whether they are new or modern Apple Watches or commonly sized traditional watches. You should instead be asking yourself if you can deal with the thickness of the Apple Watch Ultra, as it’s really here that it varies substantially from other watches. If you can, you’ll be getting one of the very best smartwatches we’ve ever tried.