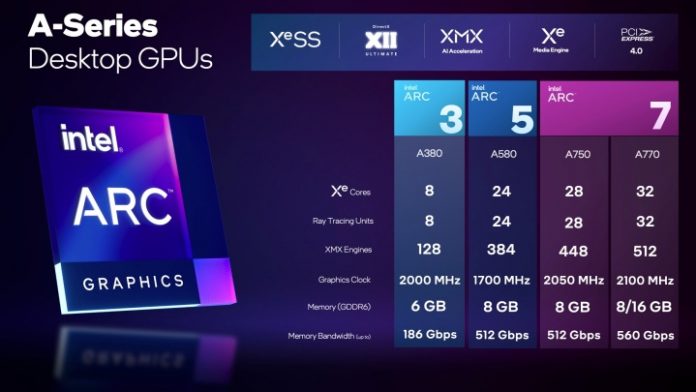 Intel Arc Alchemist is here, and the flagship comes in two different versions: Arc A770 16GB and Arc A770 8GB. Both of these GPUs have been compared to Nvidia’s GeForce RTX 3060 and RTX 3060 Ti, but how do they really match up?

For many years, the GPU arena has been a two horse race; Dominated by AMD and Nvidia, it lacked any extra competition. Now, with Intel joining the fray, do these two industry stalwarts need to start worrying? We’ve tested both Intel Arc and Nvidia extensively, so we have all the answers. Read on to find out which GPU wins the battle.

We’re starting off at a tricky point by trying to tackle the matter of specs. Comparing Nvidia graphics cards to Intel’s Arc purely by the numbers, is difficult. Both the cards are so different on an architectural level that many of the usual suspects, such as the core counts, won’t give us any real indication as to which card is better.

The comparison gets even harder when we take into consideration the fact that there will be two versions of the Intel Arc A770 and not just one — one with 8GB memory and the other with 16GB. However, Intel itself will not be releasing the 8GB version, relying instead on board partners to do so. With that in mind, it’s hard to say when and where it will really make an appearance.

The real battle will inevitably take place between the 16GB Arc A770 and the RTX 3060. With that said, let’s check out all the specs and compare them.

As you can see, the two Arc A770s are virtually the same apart from the large disparity in memory size: 16GB and 8GB. The RTX 3060 sits in between with 12GB, which is more than the RTX 3070 (8GB). Ultimately, the Arc A770 certainly has more memory and faster bandwidth as well as a higher boost clock. This comes at the cost of the total board power (TBP), though — an extra 55 watts is nothing to sneeze at.

We’ve had the chance to review the Arc A770 and the A750, so we’ve put them through a number of tests and compared them to similar options from Nvidia and AMD. In this article, we’ll focus on how the A770 fared against the RTX 3060, but the numbers are there if you want to consider how they compare to AMD’s RDNA 2 GPUs too.

Intel itself has admitted to the fact that Arc Alchemist does a much, much better job at running DirectX 12 and Vulkan titles than DX11 and older, and this is proven through our tests. We tested the 16GB version of the Arc A770 at 1080p and 1440p in a number of games, comparing pure gaming performance as well as its ray tracing capabilities to the RTX 3060.

Testing in 1440p gave us similar results. The Arc A770 16GB proved to be somewhere between the RTX 3060 and the 3060 Ti, on average, in 1440p gaming scenarios. We’ve also examined the ray tracing performance of the Arc A770 and found that it did a good job of it — decidedly better than the AMD options, at least. While Nvidia is still the ray tracing king, Intel might shake things up in that regard, seeing as it actually beats the RTX 3060 on average — and remember, Nvidia is known for its ray tracing capabilities.

Initially, the predicted performance for the Arc A770 was closer to the RTX 3070 or even the 3070 Ti. While we now know that won’t be the case, it’s clear that Intel is capable of trading blows with Nvidia’s RTX 3060 in a big way. In terms of raw performance, it won in most benchmarks. The results might be different in DX11 or older titles, where Intel still has much to work on, but for future releases, Intel’s Arc GPUs look ready to compete.

Prior to the release of Intel Arc, the company’s experts have made it clear — Intel may not beat the best GPUs in terms of performance, but it intends to stay competitive in terms of pricing. So far, its staying true to its word, although the difference in price won’t be major between the three (or two, really — read below) cards.

You may be wondering what this is about, seeing as the RTX 3060 is, presumably, cheaper than the Intel Arc. However, while the MSRP was set at $329 upon the card’s release in February 2021, the actual price is often different. On , Nvidia’s board partners are selling the card for anywhere between $380 and $450. The Founders Edition is not sold directly by Amazon, but various retailers offer it up on the platform for up to $500.

On paper, Intel Arc is more expensive. In reality, it might turn out to be cheaper, but it all depends on its availability and the demand for this new graphics technology. You can pick one up starting on October 12, 2022.

As mentioned, Intel will only be selling the Arc A770 16GB Limited Edition GPU directly. The 8GB version may be picked up by its board partners, but we don’t know when that might happen. In any case, at just $20 more, the 16GB version provides much better value.

Intel Arc has had a rocky start. From multiple delays to driver issues and performance that fails to match up against Nvidia’s and AMD’s flagship, the young GPU lineup hasn’t had it easy — and this trend is likely to continue to some extent. After all, the GPU market has long been a two-horse race, and Intel will need to fight to steal away some of the Team Green and Team Red regulars.

With all that said, our tests speak for themselves — the flagship Intel Arc A770 16GB GPU outperforms Nvidia’s RTX 3060 in most scenarios. In some cases, it nearly caught up to the RTX 3060 Ti. In theory, it’s slightly more expensive, but in practice, the cost of it remains in the same ballpark as the RTX 3060. It is, however, considerably more power-hungry with its 55-watt higher TBP.

Which one is better — the A770 16GB, the A770 8GB, or the RTX 3060? If you’re mostly going to play newer titles, the Intel Arc option is a reasonable option, if a bit of a gamble due to how new it is. If you’re mostly into older games, the choice might be harder due to Intel’s ongoing battle with optimization in DX11 games.

Get the Intel Arc if you don’t mind a bit of an experiment — it really has proven itself to be a solid card for this price range.