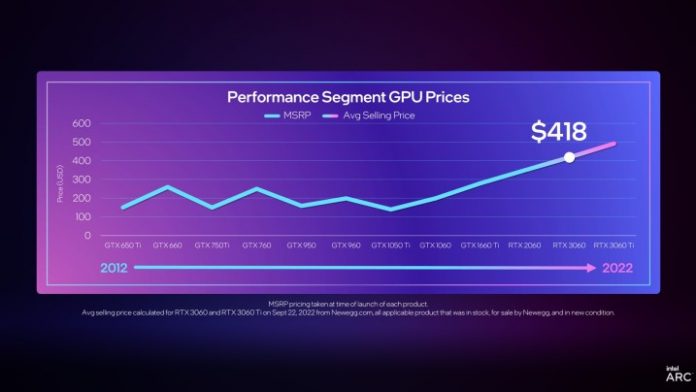 With the launch of its Arc Alchemist GPUs, Intel is throwing its hat into the ring of desktop graphics, and for the first time in two decades PC users will be able to choose a graphics card made by a company other than AMD or Nvidia. However, Intel isn’t going all out this generation and instead will be focusing on the low-end and midrange segments of the market, which has largely been neglected by AMD and Nvidia.

The Arc A750 is Intel’s second fastest GPU, and it’s taking aim right at Nvidia’s RTX 3060, one of the most popular GPUs today. Here’s how the A750 measures up.

Although the RTX 3060 launched in early 2021 with an MSRP of $329, it rarely (if ever) can be found at that price point. Today, most 3060s sell for about $400. That kind of price was once considered to be firmly in the high end, and Intel has directly called out Nvidia for it.

Available today for $289, the Arc A750 undercuts the 3060 by nearly $100, and has nearly the same MSRP as the ultra popular GTX 1060 from 2016. The MSRP doesn’t mean actual price, though, something that we all learned the hard way over the past two years. It wouldn’t be surprising if the A750 is in short supply at launch, but hopefully it will be readily available a few weeks or so later.

Just as it’s difficult to compare AMD and Nvidia GPUs based on specifications alone, the same will apply for Intel GPUs. Still, it’s important to lay out the raw specifications to see if one card has a particular advantage in any one area.

One large difference that may pop out to you is the disparity in core count, but at an architectural level these GPUs are so different there’s very little point in comparing core count. Likewise, you may notice that both GPUs have the same amount of ray tracing cores (or units as Intel calls them), but again these GPUs are vastly different and these ray accelerators may not be directly competitive.

It is worthwhile comparing the memory between the two GPUs, however. The A750 has a large advantage in memory bandwidth, and although some GPUs require more bandwidth than others to perform optimally, it’s certainly good for the A750 to have more. The RTX 3060 does have a larger capacity, but 12GB is definitely overkill for this performance class; the faster RTX 3060 Ti and RTX 3070 both have 8GB and are still much faster.

The A750 also has a higher TDP than the 3060, which means it’ll consume more power. You’ll have to consider whether or not the extra 55 watts required for the A750 is worth it.

Being cheaper than the 3060 doesn’t mean much if it’s also much slower. As it turns out, however, the A750 is actually a tad faster at 1080p on average, according to our testing. Given that Intel is a newcomer and what you might have heard about Arc’s buggy drivers, these results are pretty surprising (in a good way).

The story is the same at 1440p; the gap between these two GPUs hasn’t changed. In most games at either resolution, the A750 is about neck and neck with the RTX 3060, but in Red Dead Redemption 2, we actually found the A750 was over 20% faster. This is an outlier, but it might be a sign that the A750 has some untapped potential that could be unlocked with better drivers or better game optimization.

One area that the A750 falters a bit is in the 1% low framerate, which is an indicator of stuttering and poor frame pacing. The A750 has somewhat worse 1% lows than the 3060, but not enough to make it unplayable. It would be nice to see Intel try and get these framerates up, though, since a smoother gaming experience is always better.

Aside from the driver situation, another big caveat is the necessity of turning on resizable base address register (or ReBAR). Arc GPUs perform terribly with this feature disabled, which is a problem for older systems that might not allow users to enable ReBAR. Intel says this won’t be a problem with future Arc GPUs, which is good, but in the here and now you’ll have to make sure your motherboard and CPU support ReBAR before you switch to Intel graphics.

Although ray tracing is mostly reserved for high-end GPUs with the horsepower to deliver a 60fps experience with ray tracing on, both the A750 and the RTX 3060 have ray tracing support, so we tested that as well. As you can see, however, the A750 is significantly behind the 3060, though both GPUs were able to hit 30fps on average.

The gap does shrink a bit at 1440p, however; perhaps the A750’s superior memory bandwidth is coming into play, or maybe it’s easier to feed the A750’s cores at higher resolutions. Though, while these benchmarks certainly are interesting, you probably won’t want to turn ray tracing on at 1440p whether you have an A750 or an RTX 3060, as neither GPU was able to obtain an average of 30fps.

Just as Nvidia has Deep Learning Super Sampling (or DLSS), Intel has its own upscaling software called Xe Super Sampling, or XeSS. Like AMD’s FidelityFX Super Resolution, XeSS is a brand agnostic upscaler that works on any GPU, but is likely optimized for Intel’s own Arc cards. It comes with four different modes: Ultra Quality, Quality, Balanced, and Performance.

That being said, this isn’t an analysis of visual quality. XeSS certainly has the performance, but that doesn’t mean much if it doesn’t have the visual quality to match DLSS, something which we’re bound to test at some point.

A third player, not a third wheel

Intel’s Arc is the first GPU team blue has worked on in more than a decade, but this lack of pedigree shouldn’t put off those interested in becoming early adopters. The Arc A770 and A750 are capable GPUs that look set to offer credible competition for the midrange of the graphics market, at a time where AMD and Nvidia don’t have much new and exciting to debut — at least at this sort of price and performance.

The A750 is a worthy competitor to the RTX 3060, and though stock and pricing will be very big components in determining just how well these cards sell and how many inroads Intel can make a market dominated by the two big names, it’s off to a good start.

Facebook
Twitter
Pinterest
WhatsApp
Previous articleCan I use an Intel Arc GPU with AMD Ryzen?
Next articleIntel Arc A770 16GB vs. A770 8GB vs. Nvidia RTX 3060