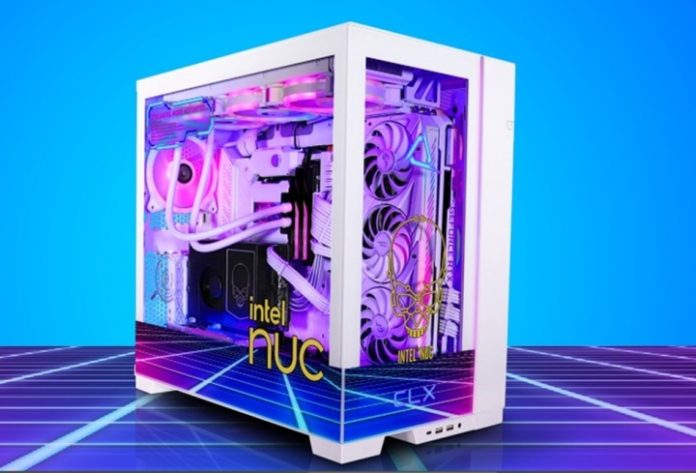 If one PC is not enough, why not go for two PCs? CLX has just made that concept a lot more practical by stuffing two computers inside a single case.

Made in cooperation with Intel, the system shares some components and doubles up on others, creating a fully functional dual-PC setup. Is this going to be every streamer’s dream rig?

This fancy-looking PC is the love child of CLX and Intel, and more precisely, Intel NUC — it utilizes an Intel NUC 12 Extreme compute card in order to combine two PCs into what is essentially a single system.

For streamers, content creators, and other PC users in need of some extra oomph, it might be hard to maintain good performance while running multiple processes all at once. This is why many professional streamers use two computers — one for streaming and one for gaming. Streaming is a resource-heavy task, so when you’re playing an AAA title, even the best CPU might struggle.

CLX seems keen to solve that (admittedly fairly niche) problem by adding that second PC into the first PC, letting them coexist and split some components. The benefits are definitely there, starting from practicalities like space-saving, to more important aspects such as energy usage.

The two PCs have the same case, power supply, liquid cooling system, fans, and graphics card. However, there are two processors in there (both a Core i9-12900K), accompanied by two sets of 32GB RAM, one at 5,600MHz, one at 3,200MHz, and a boatload of storage. In total, there are four drives: Two SSDs for the operating system, a 4TB HDD, and a 2TB SSD.

The idea seems to have come from Intel, but CLX approached it with excitement. CLX’s director of marketing and product, Jorge Percival, was quoted by Wccftech, saying the following:

“When Intel first approached us with this concept, we were immediately intrigued at the possibility of successfully combining two PCs in one build. Now that it’s been realized, our team is excited about the impact it will have on efficiency, not just in gaming, but across so many other industries, including streaming and content creation.”

This fun build was revealed at the Intel TwitchCon Party, and CLX has plans to show it off on its Twitch channel on Tuesday, October 11, at 6 p.m. ET.

This PC is a proof of concept, so while it proves that it can be done, it’s not out for sale yet, and we don’t know if, or when, it will become available. However, CLX certainly seems eager to evolve the idea, so we might see these beasts in stores eventually. While most of us have virtually no use for a PC like this, it’s still fun to see that it can be done.