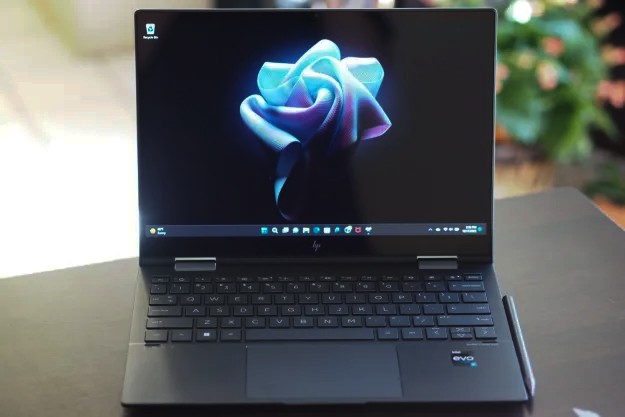 “The HP Envy x360 13 offers solid productivity performance to go with great battery life for a Windows machine, along with a spectacular OLED display and solid build.”

Dell just released its newest XPS 13, a laptop that we added to our list of best laptops given an attractive price that targets Apple’s appealing MacBook Air. HP has clearly taken the same approach with its 2022 Envy x360 13, but takes things a step further.

The Envy x360 13 is a highly flexible 360-degree convertible 2-in-1, and it offers a gorgeous OLED display option that costs less than the XPS 13’s high-end IPS models. Generally, I’ve been a fan of HP’s Envy line because it offers great performance for less money than many other premium machines. I’ve rarely seen a device that offers this much laptop for so little money. It’s an astounding value.

These prices are extremely attractive for a laptop with the Envy x360 13’s features and build quality. The new Dell XPS 13 is $1,000 for the same entry-level configuration, meaning HP undercuts Dell by $300 on sale ($100 at list prices). And, the XPS 13 costs $1,549 for the same configuration as the Spectre x360 13’s maxed-out model but with a WUXGA IPS touch display rather than 2.8K OLED. That makes the HP a very well-priced laptop indeed that’s available for less than the Apple MacBook Air M1. And as configured, at $1,000 with a gorgeous OLED display and twice the RAM and storage, the Envy is $400 less than the MacBook Air M2.

It’s important to distinguish between HP’s list and sale prices when making your purchase. But even at list, the Envy x360 13 is a great value.

As we noted in our Dell XPS 13 review, the Apple MacBook Air M1 (not to mention the M2 version) is a superior laptop to comparable Windows machines. It’s awfully hard to compete with the MacBook Air’s combination of build quality, performance, and battery life. So, it’s reasonable to compete on price. Of course, price isn’t everything, and HP clearly understands that as well.

The Envy x360 13 is not a cheap laptop; it simply doesn’t cost a lot. It’s constructed entirely of aluminum, and it has a solid chassis and lid with no bending or flexing unless you’re downright abusive. The lid, for example, is more rigid than the MacBook Air M2’s, which is saying a lot. The MacBook is thinner at 0.44 inches compared to the Envy x360 13’s 0.63 inches, as is the 0.55-inch XPS 13, but it’s not like the HP is overly thick.

At its thickest point, the MacBook Air m1 is also 0.63 inches, so the Envy x360 13 is just fine. Each of these laptops is around the same weight, with the HP being a few ounces heavier at 2.95 pounds.

The Envy x360 13’s display bezels are a bit thicker than the XPS 13’s and the MacBook Air M2’s, with a larger bottom chin thanks to the 360-degree convertible hinges and an overall 87% screen-to-body ratio (SBR). So, it’s slightly larger in width and depth than the XPS 13 with its 90%+ SBR, while being almost identical in size to the MacBook Air M2 (which has a slightly larger 13.6-inch display).

Overall, the Spectre x360 13 is a comfortable size and it works well in tablet mode thanks to the taller 16:10 display that’s closer in dimensions to a regular sheet of paper. Notably, HP’s hinge is almost as well-designed as Apple’s, allowing the lid to open with one hand while holding it in place through all four modes — clamshell, tent, media, and tablet.

Apple’s Magic Keyboard is the best available today, but the Spectre x360 13’s keyboard is excellent for a Windows laptop. It has good spacing and large keycaps, and light, snappy switches. The touchpad is large enough and good for a mechanical version, but still not as good as Apple’s haptic touchpad. The display is touch- and pen-enabled, of course, which is a plus. Inking was smooth and precise with HP’s active pen.

The Envy x360 13 wins out in connectivity, with as many Thunderbolt 4 ports as the XPS 13 and MacBook Air M2 while adding in two USB-A ports for legacy support. HP kept the audio jack, which is a huge improvement over the XPS 13 that inexplicably dropped it.

That doesn’t bother some people who are fully invested in Bluetooth headsets, but I have a favorite pair of wireless cans and I like being able to use them without hassle.

In another win over the XPS 13, the Envy x360 13 also has a 5MP webcam that’s much higher resolution than the XPS 13 and MacBook Air M1’s 720p versions, and HP bundles in a few utilities that improve videoconferencing quality and performance. If you’re a hybrid worker who relies on video calls to stay in touch, you’ll appreciate the Envy x360 13’s backlight adjustment, appearance filter, and auto frame functionality.

The Envy x360 13 also incorporates an infrared camera for Windows 11 Hello passwordless login via facial recognition, and there’s an electronic shutter for the webcam. In total, these privacy features beat out both the XPS 13 and the two MacBook models.

It’s not all perfect, though

The MacBook Air M2 is a speedy laptop thanks to its second-generation Apple Silicon processor with eight CPU cores and up to 10 GPU cores. That chip is faster than the Core i7-1250U in my Envy x360 13 review unit, which is a 9-watt CPU with 10 cores (two Performance and eight Efficient) and 12 threads. The XPS 13 uses the same U-series Intel CPUs, although we reviewed the slower Core i5 version.

In our benchmarks, the Envy x360 13 was more competitive than I expected. The MacBook was faster but not by a lot, and the HP beat out Dell’s slower CPU by a significant margin. That surprised me as well, because I didn’t expect such a huge delta between the Core i7 and Core i5. Note that the XPS 13 was much faster when set in Dell’s performance mode, while the equivalent HP utility didn’t have as much impact. If I had to guess, the Envy x360 13 with the Core i5 would likely outperform the XPS 13 at its fastest.

The Envy x360 13 is plenty fast for demanding productivity users.

In most of our benchmarks, the Envy x360 held its own against both MacBook Air models and it was actually faster in our Handbrake test that encodes a 420MB video as H.265. The MacBook’s single-core performance was generally higher, while the Intel chip made up some ground in multi-core tests. Where the MacBook Air M2 would likely win out is in the Pugetbench Premiere Pro benchmark that runs in a live version of Adobe’s Premiere Pro video editing application. Apple Silicon chips perform well in this benchmark thanks to various optimizations and a GPU that’s tailor-made for such tasks. I didn’t even bother to run the benchmark on the Envy, because even faster Intel processors with Iris Xe graphics achieve considerably lower scores than the Apple M2.

All that means is that the MacBook holds an edge in creative tasks, but the Envy x360 13 is plenty fast for demanding productivity users. None of these laptops are gaming machines, though.

Where the MacBook Airs, both the M1 and M2, hold a more significant advantage is in battery life. The Envy x360 13 did well for a Windows laptop in our web browsing and video tests, and very well in the PCMark 10 Applications battery test — enough so that it’s possible typical users will get a full day’s work. But the MacBooks were spectacular, promising closer to a day and a half of battery life.

To be fair, my Envy x360 13 review unit equipped a more power-hungry OLED display, but even so, Apple’s battery life is impressive. Note that according to HP, the low-power Full HD+ IPS display gets significantly longer battery life and so Apple’s advantage may be less with that model, but it’s not something we tested.

We had our choice of review machines, specifically between the low-priced Full HD+ and the OLED versions. We chose to review the latter, and I’m glad we did. I love OLED displays, and the Envy x360 13’s panel is just as spectacular as always. It’s a higher resolution than the MacBook’s Retina display, and it offers plenty of brightness with wide and accurate colors and the usual inky OLED blacks. It’s in another league compared to the XPS 13 IPS panel and the MacBook Air M2 display which was improved over the M1’s.

Simply put, the Envy x360 13 will be a pleasure to use whether you’re doing productivity work, where text will be black and sharp on a white background, editing photos with excellent color performance, or watching media thanks to awesome high dynamic range (HDR) support. Apple’s MacBook Air M2 display is good, but OLED is much better.

An outstanding Windows 2-in-1 choice

I loved the HP Spectre x360 13.5, which enjoys a more elegant design, faster performance, and an equally good display. But the Envy x360 13 is a lot less expensive, and it is, therefore, a more formidable competitor to the MacBook Air M1 and M2 than its sibling.

In fact, I’m not sure that there’s a midrange 13-inch laptop that’s better than the Envy. The Dell XPS 13 is more expensive, and it doesn’t offer the same display quality no matter how much you spend. And at $730, no Apple laptop can touch it.