HomeNewsGoogle Pixel Watch vs. Samsung Galaxy Watch 5: which is the Wear...
News

Google Pixel Watch vs. Samsung Galaxy Watch 5: which is the Wear OS champ? 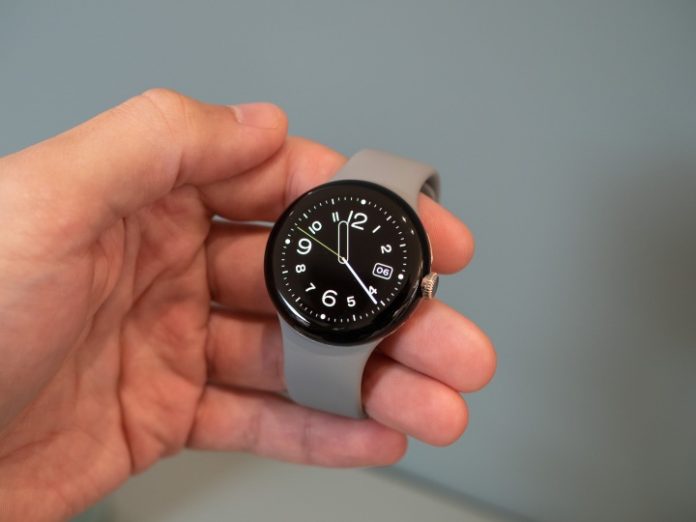 Google has unveiled its highly-anticipated Pixel Watch, ushering in a new era for Wear OS devices and the company’s expanding Pixel ecosystem. It’s a fitting companion to the new Pixel 7 and Pixel 7 Pro, which were also announced during this week’s Made by Google event, alongside a new Pixel Tablet.

While it’s encouraging to see more Wear OS smartwatches appearing, the real question is whether Google’s first smartwatch brings enough to the table to topple Samsung’s Galaxy Watch 5, a device that’s effectively become the gold standard of Wear OS devices. Read on as we compare their specs and features to answer that question.

Up to 50 hours (based on Samsung’s laboratory measurements)

Google has gone with a modern and minimalist design for its first smartwatch. A circular, domed face blends seamlessly into the edges with only a crown and a small button on the side. While the Pixel Watch is still unmistakably a Wear OS device, it has a certain elegance that belies its role as a smartwatch.

While taste is, of course, subjective, the design of Pixel Watch makes Samsung’s Galaxy Watch 5 appear a bit more utilitarian. There’s nothing wrong with that, but it’s fair to say they’re unique enough that each will appeal to a different type of customer.

That’s a good thing since both smartwatches offer such similar specs in many other areas, starting with the display technology. The Pixel Watch and Galaxy Watch 5 both sport always-on AMOLED displays, and although Google hasn’t provided the exact screen resolution, it does offer a pixel density of 320 pixels per inch (ppi), on par with Samsung’s two Galaxy Watch 5 models, which come in at 321 ppi and 330 ppi. That’s not a difference anyone will notice with the naked eye.

Likewise, while the Galaxy Watch 5 gained a hardened sapphire crystal screen this year for increased scratch resistance, the Pixel Watch uses 3D Corning Gorilla Glass 5 that should provide similar protection against bumps and scrapes. Google’s smartwatch also gets an edge for using a stainless steel casing, a finish that generally commands a premium from other smartwatch makers. Samsung’s Galaxy Watch 5 is only available in aluminum. Both the Pixel Watch and Galaxy Watch 5 offer five atmospheres (5 atm) of water resistance, although Samsung’s is also certified for IP68 dust resistance.

The Pixel Watch and Galaxy Watch 5 also differ in their hardware controls, with Google’s smartwatch featuring a single rotating crown versus Samsung’s two physical buttons and capacitative bezels for using swipe gestures. Both watches also have touchscreens and are available in a generous assortment of bands and colors.

Nevertheless, while the aesthetics are a matter of personal taste, we think the Galaxy Watch 5 gets a significant edge by offering a choice of two sizes and a wider selection of bands and accessories.

So, it’s fair to say that both watches need to hit a charger at least once every 24 hours. Thankfully, they also feature similar fast-charging speeds; the Pixel Watch can go from dead to 50% after about a 30-minute charge, while the Galaxy Watch 5 reaches at least 45% in the same amount of time. These faster charging speeds won’t matter much if you don’t wear your watch to bed, but it’s beneficial if you want to take advantage of the sleep-tracking features both smartwatches offer.

The Pixel Watch includes all the usual health sensors, including an optical heart rate sensor and a “multipurpose electrical sensor.” Those are pretty much table stakes for any modern smartwatch, and there’s nothing particularly revolutionary or exciting about the sensor hardware. If anything, the Pixel Watch is a bit lacking. It technically has a blood oxygen sensor inside, but it’s not currently available for use and has no ETA for when that’ll change.

By comparison, the Galaxy Watch 5 includes Samsung’s upgraded BioActive Sensor, which combines a Bio-Electrical Impedance (BIA), electrocardiogram (ECG), and photoplethysmography (PPG) heart rate sensor. The Pixel Watch and Galaxy Watch 5 both include an ECG app to help look for signs of atrial fibrillation.

The Pixel Watch gets what is perhaps its most significant edge from Google’s 2019 acquisition of Fitbit, which makes it effectively an advanced Fitbit smartwatch. The smartwatch may be new, but it packs in a well-established suite of health and fitness features that Google’s engineers have only been improving upon even more.

For instance, Google notes that its machine learning teams worked with expertise from Fitbit to develop an innovative approach that provides even more accurate heart rate tracking. This data also feeds into metrics like Active Zone Minutes and Daily Readiness to help optimize your workouts and the sleep tracking features. The health and fitness features should also be familiar to anybody who has used a Fitbit device. The Pixel Watch also works with a Fitbit Premium subscription, which Google is giving away free for the first six months to new buyers.

Of course, Samsung has its own health and fitness suite that’s matured over several generations of the Galaxy Watch. This includes a few more built-in coaching features, including sleep coaching to deliver a tailored routine to help improve your sleep quality. The Pixel Watch offers a Sleep Score to give you some insight into your sleep trends, but you’ll need an ongoing Fitbit Premium subscription to get the more advanced Sleep Profiles.

Similarly, the Galaxy Watch 5 includes 100 different workout types, compared to 40 on the Pixel Watch. That includes all the most common workout types, so it should be sufficient for most folks, but Pixel Watch users can add 1,000-plus workouts with a Fitbit Premium subscription.

The bottom line is that while the Galaxy Watch 5 includes advanced health, fitness, and coaching features out of the box, the best features of the Pixel Watch are effectively locked behind a paywall. New owners will get six months of Fitbit Premium for free, but you’ll need to start paying a monthly fee if you want to take advantage of the kind of coaching and wellness metrics that Samsung offers at no additional charge.

The Pixel Watch and Galaxy Watch 5 both run Wear OS 3.5, the latest version of Google’s wearable operating system. However, Samsung layers its own One UI Watch 4.5 on top of that, which offers more customizability and user interface features that will be more familiar to folks with Samsung smartphones.

Beyond the One UI differences, both smartwatches include wearable versions of Google Maps, Google Wallet, Google Assistant, YouTube Music, and Messages, while the Galaxy Watch 5 naturally also adds Samsung Pay and Samsung Health to the mix. Since they both use Wear OS 3.5 under the hood, they should be capable of running the same apps. However, be forewarned that the Wear OS app ecosystem is still a pretty barren landscape, especially if you stray beyond fitness apps like Strava, Adidas Running, and MyFitnessPal.

Emergency SOS is also supported on both wearables, allowing you to quickly call emergency services. The Galaxy Watch 5 also supports fall detection out of the box, which isn’t available on the Pixel Watch at launch; Google promises it will be arriving early next year in a winter Wear OS update.

The Galaxy Watch 5 is available from Samsung and most retail stores, with pricing starting at $280 for the 40mm Bluetooth version and $330 if you want to add in LTE support. The larger 44mm model adds $30, bringing the prices to $310 and $360 for the Bluetooth and Wi-Fi versions, respectively.

The Pixel Watch is available from Google’s online store starting at $350 for the Bluetooth and Wi-Fi model or $400 for the 4G/LTE cellular-equipped version. It comes in a single size with a stainless steel finish and four color and band combinations.

Google has done an impressive job with the Pixel Watch, but it’s still clearly a first-generation device. It’s hard for that to compete with Samsung’s much more mature Galaxy Watch platform.

For one, the Galaxy Watch 5 offers more advanced health sensors, and even if the capabilities of some of those have yet to be fully unlocked, at least the hardware is there. Further, Samsung’s sophisticated health and fitness tracking and coaching features are available at no extra charge, while Google is offering only the basic Fitbit service and locking all its best features behind a subscription paywall.

Nevertheless, Google should be commended for a solid first attempt, and it will be exciting to see where it goes with future generations of the Pixel Watch. For now, though, we think it’s a wearable that will appeal to only a few specific groups: owners of Google’s Pixel phones, folks firmly entrenched in the Fitbit ecosystem, or those who simply like the design and aesthetics. For everyone else, the Galaxy Watch 5 is the smartwatch we recommend.